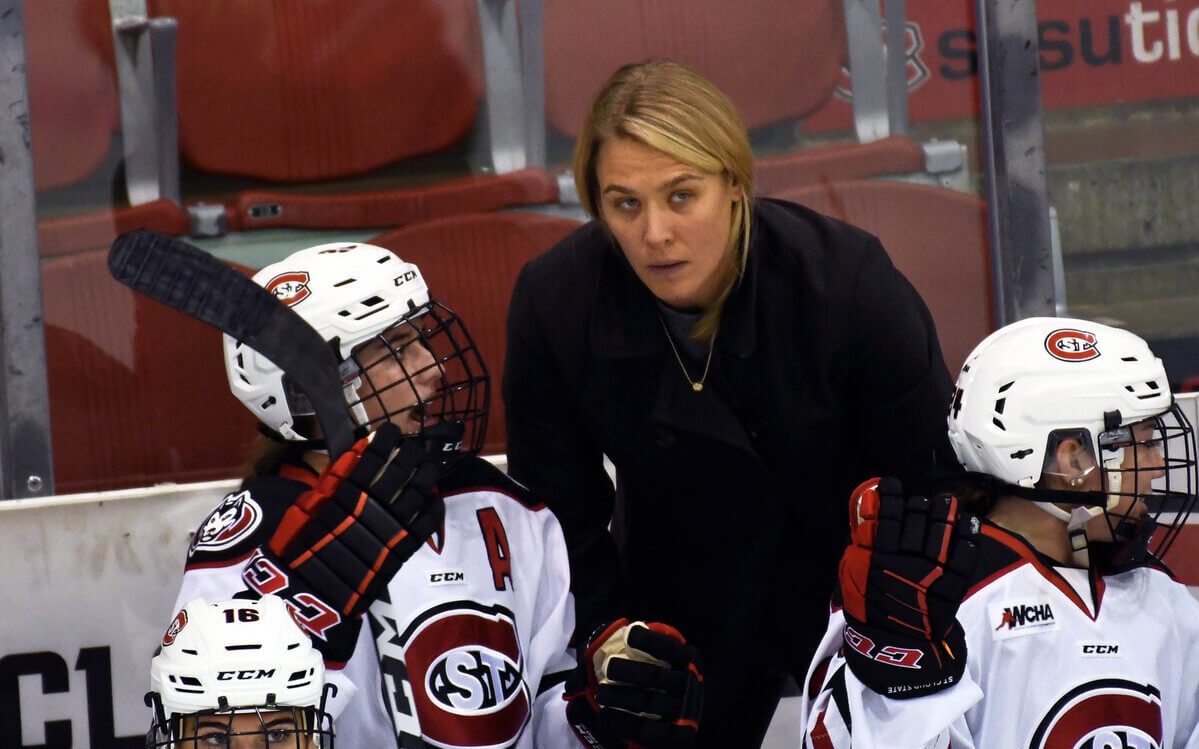 Former U.S. Olympian Molly Engstrom, who spent the past three seasons as an assistant coach at St. Cloud State University in Minnesota, has been named the University of Maine’s new women’s ice hockey coach.

She replaces Richard Reichenbach, who stepped down in July along with his assistant coach and wife Sara Reichenbach.

I feel blessed with this opportunity. I’m really grateful, Engstrom said. I am looking forward to becoming a head coach for the first time and also feel a connection to the area.

Engstrom, 39, was one of three finalists for the St. Cloud State head coach job, but the job went to former University of North Dakota head coach Brian Idalski.

Idalski replaced Steve Macdonald, who scored a total of 21-60-8 in his three seasons with St. Cloud State.

After growing up in a small Wisconsin town, this feels good, said 39-year-old Engstrom, who grew up in Siren with a population of 777, according to the 2020 census.

Ralph said this is in line with the universities’ desire to increase the salaries of their coaches.

We talked to a lot of people at USA Hockey and people in the pro leagues and the name Molly’s just kept coming. They talked about her ability to build a positive culture. Her ability to create that culture and a team identity took her to another level.

She is a two-time Olympic medalist (2006, 2010), and she was named the best defender at the 2010 Winter Olympics in Vancouver, British Columbia, when her team took the silver medal. She won a bronze medal in Turin, Italy in 2006.

She was an All-American and two-time Western Collegiate Hockey Association Defensive Player of the Year at the University of Wisconsin and a top 10 finalist for the 2005 Patty Kazmaier Award, awarded to the nation’s best women’s hockey player.

Between 2014-16, she was the girls’ varsity hockey coach and assistant athletic director at the Kimball Union Academy in Meriden, New Hampshire.

Former UMaine men’s hockey coach Tim Whitehead is the boys’ hockey coach at Kimball Union, and she said she learned a lot from watching his practices and games.

She then played and coached in the Swedish Womens (Professional) Hockey League from 2016 to 2018 and her Djurgarden IF team captured the 2017 championship.

She has served as the International Ice Hockey Federation U18 High Performance Camp Coach/Ambassador since 2016 and was a USA Hockey Development scout since January 2019.

She obtained a Master of Sports Administration from the Russian International Olympic University in 2014.

Ralph said he met the team and asked them what they wanted from a head coach.

Several of them said they would be excited to have a coach who had lived through the Division I experience as a player and played at a high level to understand the demands of a Division I athlete, Ralph said. Her playing experience speaks for itself. She is one of the best players to ever skate.

Reichenbach amassed a record of 105-155-28 during his nine seasons behind the UMaine bench.

He led his teams to three consecutive places in the Hockey East semifinals, while the Black Bears went 4-0 in quarterfinals, all on the road, to reach the semifinals.

They’re excited to have this opportunity, Ralph said.

She played for 1980 Team USA Olympic hockey star Mark Johnson at the University of Wisconsin and with the 2010 Olympic team. Johnson is the Wisconsin coach and led the Badgers to six national titles while being named National Team Manager of the Year four times.

I have a lot to draw on, including someone like Mark Johnson. I can’t even begin to explain the impact he had on me and my game over those four or five years, she said.

She is excited about continuing her own learning curve and said her blueprint for success starts in the defensive zone.

We are going to play hard in the defensive zone. We’ll have good puck-moving defenders and we’ll keep it simple, she said. We will have a speed skating team that will control the puck.

She pointed out that it will be important for her players to win the front fights on both ends of the ice.

She is confident she can bring in top-notch recruits and compete for the Hockey East Championships.

You have to find players you want. Orono isn’t for everyone, but neither is Boston College, Wisconsin or Minnesota, she said. You must be diligent. They’re going to be spending 90 percent of their time with their teammates, so we have to sell the product. What we can do for them and their development is so relevant at this point in their lives.

More articles from the BDN

This is the new Porsche 911 GT3 RS, now almost a race car