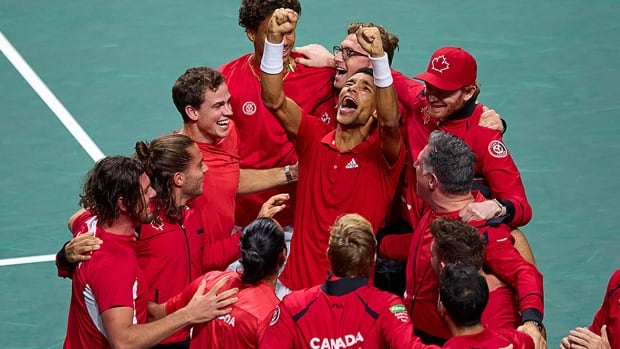 The Davis Cup is billed as the “World Tennis Championship”.

And on Sunday in Malaga, Spain, Canada defeated Australia and won.

The team that should not have been in the final won the iconic trophy for the first time since its first participation in 1913.

In a historic victory over Australia, Canada claimed its first Davis Cup in the tournament known as the World Tennis Championship.

After being swept 4-0 by the Netherlands in a qualifying draw in March, top players Felix Auger-Aliassime and Denis Shapovalov both received passes (as the top-ranked nation was eliminated) to move into the final stage. of the event when defending champion Russia was kicked out of the tournament following the country’s invasion of Ukraine.

With a second life, the Canadians came through the elimination rounds in Valencia in September to reach the final eight this week in Malaga.

They defeated Germany in the quarter-finals on Thursday, Italy in the semi-finals on Saturday and then won their two singles match against Australia on Sunday to clinch the title.

“What a way to end the year. It’s Davis Cup and we are the champions, world champions,” said Vasek Pospisil, the veteran of the group.

Felix Auger-Aliassime rolled through the clinching match in straight sets to give Canada its first-ever Davis Cup championship.

Captain Frank Dancevic, who has competed in the Davis Cup for 14 years as a player, promised the party would last all night until their 6 a.m. flights on Monday.

We encountered many obstacles this week. … But we were in good spirits and kept fighting to the end.Canada Captain Frank Dancevic

The young substitutes Alexis Galarneau and Gabriel Diallo, who will undoubtedly play their part in the coming years, came to the post-tournament press conference, but could barely utter a few words.

Their unwavering and very vocal support from the sidelines, along with a large contingent of Tennis Canada staff, coaches and support staff, made it a true team effort.

“We faced a lot of obstacles this week. We lost a lot of games, but we were in a good mood and kept fighting until the end, and we are here now with the trophy. It’s just an incredible feeling,” said Dancevic .

After the nervous moments earlier in the week, the final against Australia on Sunday was almost an anticlimax.

Denis Shapovalov, who was physically battered on Saturday after a three-hour and 15-minute effort in the defeat, came out of the opening game a new man.

Denis Shapovalov cruised to a straight sets victory in the first match of the cup final.

And then, to clinch the tie and cup, Felix Auger-Aliassime was just as impressive, beating Australian No. 1 Alex de Minaur 6-3, 6-2.

His performance during the week, particularly for Shapovalov in the doubles match against the Italian team on Saturday to give Canada the chance to play in Sunday’s final, was impeccable.

“I saw the opening. I thought, ‘This is it. I’m going for it.’ That’s it,” Auger-Aliassime said of match point. “After that my legs just fell down on me. I was just, my leg just collapsed. To have Frank and everyone running at me screaming, it was amazing.”

Fans in Canada watching both official broadcasters Sportsnet in English and TVA in French couldn’t catch the final moments of the win as the international feed cut out at the most inopportune moment. The commentators kept scrambling to try and explain. And only then were they able to get some attention for the trophy ceremonies by tapping into the Tennis Channel’s US feed, which was unaffected.

The Canadian men have excelled in team competitions in recent years, starting with their surprise run to the final of the first “new format” Davis Cup in 2019.

They were beaten there by the much more experienced Spanish team.

But Auger-Aliassime was only 19 at the time; Shapovalov just 20.

Last January in Australia, Canada won the ATP Cup, a new team competition with a similar format that included more of the world’s best players.

And on Sunday it won the ultimate prize.

“We are extremely proud of the effort our team, staff and fans have put into this historic Davis Cup run,” Tennis Canada president and CEO Michael Downey said in a press release. “After finishing in second place in 2019, despite it being our first final place, all we could think about was another shot at winning the prestigious title.

“Today we not only deserved that second chance, but we delivered it. Their energy and relentless work ethic were nothing short of spectacular. We are honored to have this team of world-class athletes represent our country.”

History has been made on the field, today Canada won for the first time #DavisCup title. Bravo, Team Canada! https://t.co/67NMIDfE3Y

The Davis Cup has been around since 1900. And despite recent fundamental and much-publicized changes to the format that, many believe, have turned the event into a pale shadow of its former iconic self, it remains the ultimate prize.

Auger-Aliassime only committed to the preliminary rounds in September after a surprise early elimination at the US Open a few weeks beforehand.

But he made it to the date and led Canada to qualifying, without which Sunday would never have been possible.

He and Pospisil had to make do without Shapovalov, who didn’t play.

Pospisil, 32 and ten years older than the team’s young stars, has always heeded his country’s call. And on some occasions before they rose to prominence, he actually lifted the entire team onto his shoulders and carried it to victory.

No wonder he was by far the most emotional on Sunday.

“Over the years we’ve slowly grown closer and closer to getting the title. In 2013 we had a bit of a run and made it to the semi-finals. Then we were in the world group for a while and made it to the final in 2019,” said Pospisil. “It’s hard to explain, but [at the]early in the week it felt like we were going to win it. Just kind of a feeling I had. Maybe a few other guys had it too.”

Shapovalov’s return in the dying minutes allowed Pospisil to focus on the doubles and gave Canada two top-25 singles players.

Germany was without Olympic gold medalist Alexander Zverev, who has been injured since June.

And notably, Nick Kyrgios was not in the lineup for Australia. He is that country’s highest ranked player in both singles and doubles.

So Canada boasted one of the best one-two singles punches in the event, and the one with the most advantage.

But potential is one thing; without the on-field performance to back it up, it’s just a theory.

On Sunday, Canada backs it up to become world champions.