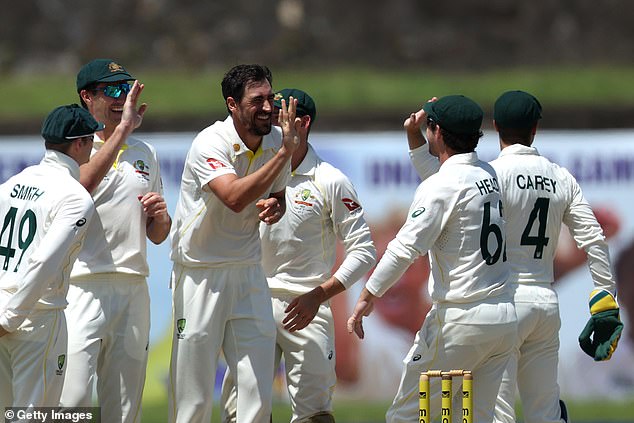 Interest in Australia’s men’s cricket team is approaching an all-time low, and shocking charts of the number of seats available for the opening day of the forthcoming Test series against the West Indies confirm that.

The start of Australia’s cricket summer would typically be a test match played at the Gabba in front of a sold-out, passionate home crowd eager to get the season started.

More than 30,000 people gathered at the iconic Brisbane venue for the first day of the opening game of last season’s Ashes series.

Optus Stadium, with a capacity of 60,000, at this rate may not even get 3,000 for the opening test of the summer against the West Indies.

Perth’s Optus Stadium will host the opening game of the summer cricket, but at the moment it doesn’t look like it will be crowded

With testing starting at 10:20 a.m. local time (1:20 p.m. AEDT) on Wednesday, a look at the Ticketmaster website where tickets can be purchased shows an extremely high number of empty seats.

Only a few very small compartments that are not closed automatically thanks to the viewing screen appear to be sold out.

Some bays didn’t sell a single ticket, and in almost all of the others you could fit the entire cohort of Big Bash League players in the empty seats.

Optus Stadium, with a capacity of 60,000, still has an alarming number of tickets available (blue is empty seats, on the far right a bay is closed due to the viewing screen)

“I hear ticket presales, it’s only a week before the game, are in the hundreds, not in the thousands but in the hundreds,” Townsend told the radio programSports Day WA recently.

“It could be a record-low Western Australian test.”

Gulls outnumbered people at the MCG on November 22 to watch Australia take on arch rivals England, a sign of public sentiment towards the team

As if that wasn’t bad enough, organizers have slashed ticket prices after years of exorbitant costs to attend cricket matches in Australia – but even that doesn’t attract fans.

In a bay that’s almost completely empty so far, adult prices for the entire day of action are just $24; while kids can enter for just $8. A family of four can enter for $14.

It comes because more seagulls than people flocked to the Melbourne Cricket Ground (MCG) last week for an ODI match between Australia and England – a match that would have once drawn a riotous crowd.

An overcrowded and confusing schedule causes many to turn away from the men’s squad, but Townsend and many others believe there’s a major reason Aussie fans steer clear of the men’s national team – and it has nothing to do with the scoreboard.

“I think we’ll see, people will vote with their feet. Whether it’s embarrassing or not, that’s for people to decide, but I think it will be very low.”

Current skipper Pat Cummins came into the role as the public raved about what he could do in what is often referred to as ‘the second most important job in Australia’ after being prime minister.

Then he began wielding the lusty sword of power to oust Justin Langer, which worked with resounding success. The feud is still strong and bitter, with the ex-coach this week labeling the players behind his effective sacking as ‘cowards’.

Aussie skipper Pat Cummins, pictured with wife Becky, is a polarizing figure to many cricket fans despite his squeaky clean image. Fans seem to be voting with their feet if you may deduce the recent buzz

When Cummins appeared to be effectively forcing Cricket Australia’s hand to drop a $40 million sponsorship with energy company Alinta over its climate change agenda, opinion from the national side plummeted even further.

It wasn’t even just about the age-old question of whether sports and politics go together, it was more about the opinion of many about its double standards; accepting money when it suited him and speaking out when it didn’t.

Couple that with the team appearing disinterested and straightforward on the field – Aaron Finch and Glenn Maxwell suggested the squad were ‘too tired to care’ about a crash in a home T20 World Cup – and it’s easy to see why fans are voting with their feet.