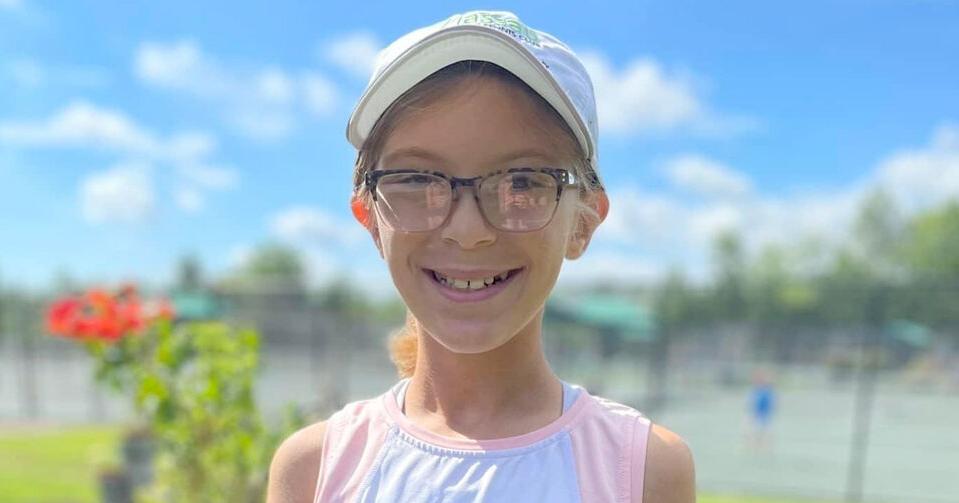 One of the great things about being a kid is that you get to have big dreams. And Isabella Miller dreams as big as she can.

My dream goal is to make it to the US Open, said the Pennington native, and become the next Serena Williams.

That’s quite a goal to shoot for, but Miller has had a great start so far.

The 10-year-old Stony Brook Elementary School student just started playing USTA tournaments on July 1. She has since gone 40-6, winning seven of the 13 tournaments she entered. Miller has reached the finals nine times and the semi-finals the other four times.

Simply put, it was an incredible run in a very short time.

I am very surprised, Miller said. I never thought I would get this far in tennis. I am very proud of myself and excited.

Her success has been a mix of dedication and fun.

She works really hard on the court, but she’s having fun, which is really important, said Seth Miller, director of tennis at Nassau Racquet Club. I didn’t realize she wanted to play tournaments until this spring when she kept asking me to put her in one. I didn’t know how she would do it. I didn’t know how good the kids who played tournaments were, because usually those are the really serious ones and they’re all very good.

It turns out that Isabella is, too. After winning three tournaments at 10-and-under, she moved up to win four of the first five tournaments she played in 12-and-under.

She loves it and every week she says, “Put me in another tournament,” said Seth. I think her results are incredible.

Miller comes from a tennis-playing family. Her grandparents were top players in Pittsburgh. Seth was the No. 1 player on his college team, West Liberty State in West Virginia, where he received a full scholarship. He has also coached some top players over the years.

Seth took Bella to the Nassau Racquet Club when she was 3, and a love affair blossomed.

I noticed she was a pretty good athlete, Seth said. And she had pretty good hand-eye coordination.

The NRC is a family business in Skillman, run by the Camper family, and Miller immediately felt the family connection when he played there.

I feel part of the family in Nassau and very comfortable there, she said. The owners (Benton Camper Jr., Cari Camper) treat me like I’m their own daughter. Tennis has been a part of my life for as long as I can remember. I grew up playing at the Nassau Racquet club and it’s like a second home to me. I have always felt comfortable on the tennis court, even when I was four years old.

After six years of playing for fun and learning her craft, Miller decided it was time to see what she could do under the pressure of competition.

I wanted to play tournaments because of my friends from clinics, she said. Some of them started playing them and I thought, if they can do it, why can’t I?

In her first official match at Arrowhead Tennis Club in Medford, Miller reached the final. She then lost in the semifinals at Centercourt in Lawrence before breaking through for her first win at Legacy Youth Tennis in Philadelphia. That was the start of a three-game winning streak.

Bella’s favorite win came in Cherry Hill, where she won her first 12-and-under tournament. “It was special to me because my grandparents were there to watch,” she said.

Miller’s regiment includes one class a week with her father, though Seth said all 20 pros at NRC have worked with Isabella at some point.

She has knowledge of almost every pro in our club, and I would say that was great, said Seth. In the summer she played six hours a day at summer camp and then she played tournaments on the weekends.

With school she can only play clinics at the club four days a week and play tournaments on the weekends. But she can still maintain her game by playing less than in the summer. Her mom takes her to some tournaments when I can’t and does a great job keeping her focused. She also deserves a lot of credit.

It’s all part of the funnest party when it comes to tennis at the Miller house.

Playing tennis as a family has brought us closer together, said Isabella. We love when we have family fights on the tennis court. We sometimes go to court and play games against each other for bragging rights.

And while things have gotten more serious for Miller over the past five months, the fun remains the same.

It’s always fun for me, she said. But I sometimes get nervous and angry when I see my opponent celebrating after winning a point. That gives me pressure, but it’s always fun.

Bella said she enjoys everything about the sport, especially winning, and feels her strengths are her volleys and overhead shots. Seth sees an elusive power that helps make a difference.

It amazes me how mentally strong she is on the tennis court, he said. You can’t really teach that. I know she’s a good athlete. That was the easy part. But she works really hard, so I’m surprised with some things, but not so surprised with others.

The one concern parents often have with individual sports like tennis or swimming is that their child will burn out too quickly and lose interest in high school. Seth doesn’t see that as a problem, as Bella has started her competitive career relatively late compared to other players.

“I taught a kid years ago who was number one in the country ages 12 and under and he got burned out because he started playing so seriously at age five,” said Seth Miller. The good thing about Isabella is that she started early enough but didn’t really get serious until she was 10. I think we handled her situation perfectly. She wants to play, while the top junior I taught in the 90s didn’t want to play because I think he started playing too seriously too early.

Judging by her success and continued zeal to play, Isabella seems to be right where she should be.