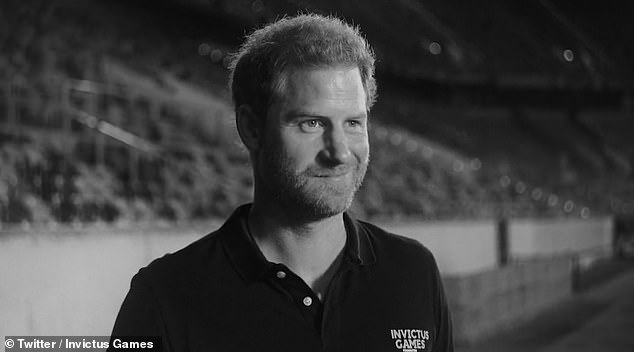 Sussex vs Sussex! Meghan Markle and Prince Harry compete in a game of table tennis as Duchess makes a surprise appearance in the Invictus Games trailer

By Lydia Hawken for Mailonline

Meghan Markle and Prince Harry competed in a friendly game of table tennis while the Duchess made a surprise appearance in a trailer for the Invictus Games.

The 80-second video shows athletes who will take part in the upcoming sporting event, which will be held in Düsseldorf in September 2023.

To promote tickets to the opening and closing ceremonies that go on sale today, the Invictus Games social media team shared the video on Twitter – where it was promptly reposted by Finding Freedom co-writer Omid Scobie.

The moody black-and-white clip opens with a view of an unused table tennis table in an empty stadium.

To highlight how the sport will be introduced to the event for the first time next year, the video then showed male, female and disabled players competing in various back-to-back games.

The Duke of Sussex then appears halfway through the trailer in a match against a blonde-haired player.

As she goes to pick up the ball, the father of two is seen nodding and smiling encouragingly.

He then crouches a bit for the camera as he prepares for her next serve.

After failing to return her quick serve, the Prince bursts into laughter, nods, and walks back to the stadium entrance to let another player take his spot.

Prince Harry appeared in the new trailer for the Invictus Games today. The Duke of Sussex was filmed playing two games of table tennis

The Duchess of Sussex appeared at the end of the video taking on her husband. The mother of two gave Harry an encouraging smile and nodded

The founder of Invictus Games gives the male player an encouraging handshake and points him in the right direction before leaving the stadium.

The tagline ‘Be Part of It’ then appears on screen – however, the Duchess of Sussex surprisingly also made an appearance just before the trailer came to an end.

The video then quickly cuts to a woman picking up a table tennis racket.

Across the table, Prince Harry smiles affectionately at his opponent before the camera zooms in on Meghan.

The Duchess – who is dressed casually in a dark V-neck jacket and has her hair tied up in a bun – gives her husband a quick nod to indicate she’s ready to play with him.

Omid Scobie shared the couple’s clip and wrote, “Harry and Meghan appear in the latest promo video for next year’s Invictus Games.

“Tickets for the opening and closing ceremonies of InvictusGames have just been released.”

Tickets for the opening ceremony start from just 33 and most seats in the Merkur Spiel-Arena already seem to be sold out.