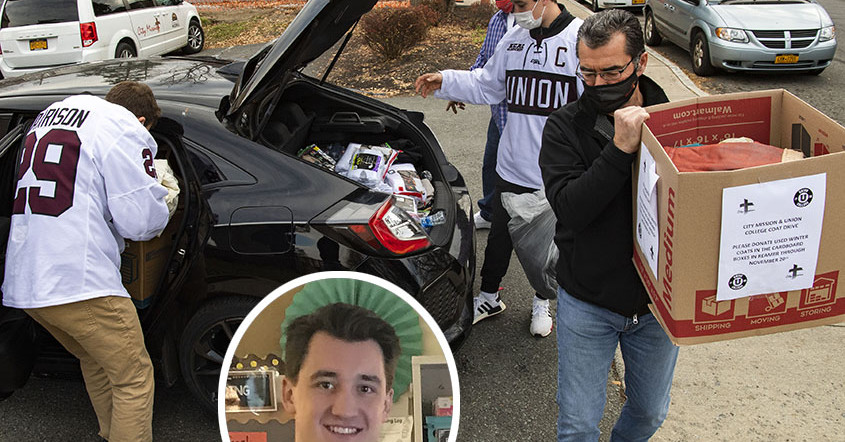 Senior Josh Kosack will never play hockey for Union College again this season, if at all.

He will still score a hat-trick.

And a coat trick.

And socks and gloves.

He started his performance with three goals on Friday morning at the Schenectady City Mission on Hamilton Street, where Kosack and senior co-captain Sean Harrison delivered about 100 coats they had collected through a campus donation.

The next stop was the provincial Department of Social Services on Broadway, to give clothes bought with $ 300 in donations, and in a few weeks, Kosack plans to bring Christmas presents for the kids to COCOA House, the mentor and tutoring center for young people in Hamilton Hill.

The Dutch are in the middle of the finals week of the autumn trimester, but are not in the middle of the hockey season, which would normally have started a month ago. In light of concerns over COVID-19, the college canceled hockey on Tuesday, meaning that unbeknownst to Kosack at the time, its last game in a Union uniform took place eight months ago, in a playoff loss with double overtime at Yale.

After stepping up his charity efforts through Kozi’s Kids last season, the Oakville, Ontario forward, didn’t want to give up his community outreach goals this season, even though there was no season. So he and Harrison made two stops on Friday, and Kosack will take a trip to Schenectady during the semipause in December to play Santa Claus for COCOA House.

“I know those kids wouldn’t be able to hang out with their friends all the time and all the pressures they face to go to school,” Kosack said, “and I spoke with [COCOA House executive director] Will Rivas. He said this is the time of the year when they start getting tons and tons of donations and presents, but this year, with all the hard times, they barely had one.

So I thought maybe there was something I could do as they can’t come to our games and I just wanted to bring some holiday spirit there. He said many of them wake up without Christmas trees and presents. That way I could put a smile on Christmas and boost some holiday spirit in the COCOA House. “

Kosack started Kozi’s Kids two seasons ago when he saw his teammates’ home game tickets go unused on Messa Rink, usually because it was too far for their families to travel. He collected the tickets and offered them to Rivas to give to children in the city whose families might not be able to afford to go to the games.

Last season, Kozi’s Kids attended almost every home weekend, and Kosack handed out mini-sticks and advice and answered questions from his biggest fans after the games.

With at least one cancellation and certainly the prospect of no fans attending this season, he came up with some ideas, starting with the City Mission coat drive.

People on campus and beyond responded.

“This is what really comes to mind, I am so impressed that, amid their own disappointment, they reach out to help someone else,” said Mike Saccocio, City Mission’s executive director. “It would have been really easy for them to be disappointed with the season and pack it up, and instead they went out and worked with their friends and did something that would make a difference to their neighbors who need it. “

Saccocio said the city mission is 100% dependent on public donations and does not receive government funding.

Last year, they handed out about 1,300 winter coats, and the boxes the Union players brought with them on Friday will boost the total for 2020.

To achieve the COCOA House goal, Kosack started a GoFundMe account called Kozi’s Kids Christmas Fundraiser and had hit $ 1,330 towards his $ 2,500 goal as of Friday afternoon.

With the season canceled and students having a long break from the end of the finals next Tuesday, Kosack will stay at teammate Joseph Campolieto’s home in Scranton, Pennsylvania and make the 2 1/2 hour drive back to Schenectady for the day. shopping and a day of shopping. pit stop at COCOA House to deliver presents for the kids sometime in December.

In the meantime, the Union players can only watch as most of the rest of Division I hockey continues with a 2020-21 schedule, including four schools from Union’s own conference, ECAC Hockey.

“We’ve been sitting on the couch for the past few days watching hockey on TV, and it’s hard to watch other people play when our season ended,” said Harrison. “But we spoke to the administration, and they wanted to make the best decision for Union and they thought it was the right one. That doesn’t make it any easier when you look at 50 teams getting their seasons going as we close it out. “

“To be honest, I have no idea,” said Kosack of his hockey future. “The terrible thought of this whole situation is that I could have played my last hockey game last year without knowing it, at Yale. That’s heartbreaking to think about. We’ll see what opportunities arise, but I really don’t know what to expect right now. “

That includes the Christmas gift drop-off next month.

Kosack planned to dress up as Santa “throw in some pillows” and hand out the presents to the kids at COCOA House himself, but that won’t happen now.

He and Harrison wore new Union hockey jerseys during their round on Friday, each with a new letter “C” on the shoulder, after being named co-captains by head coach Rick Bennett six weeks ago.

However, there is no reason why that “C” is lost. It may stand for something else.