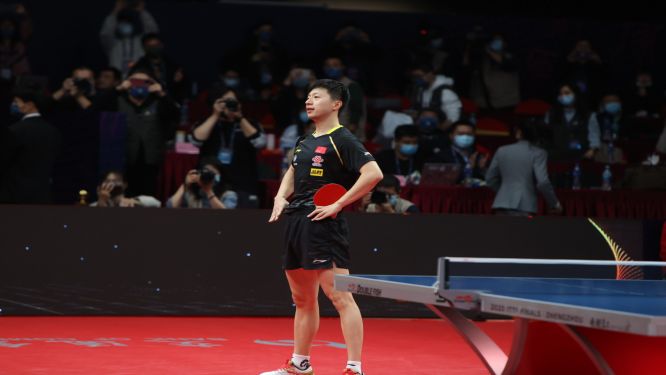 Chinese star duo Ma Long and Chen Meng set new records when they were respectively crowned champions of men’s singles and women’s singles during the Bank of Communications 2020 ITTF Finals on Sunday, November 22 in Zhengzhou, China. Ma Long landed his sixth ITTF Finals title, extending the record he already held in the league. The No. 3 seed beat Fan Zhendong, the defending champion and best seed, with a classy performance (13-11, 11-7, 12-10, 9-11, 11-8). Earlier in the day, Chen Meng became the first player to win ITTF Finals gold in four consecutive years. The best seed conquered Wang Manyu, the number 4 seed (11-9, 11-13, 14-12, 11-8, 11-5) in what was a repeat of the final a year ago, also in Zhengzhou.

After suffering a narrow defeat by Fan Zhendong exactly seven days ago in the Dishang 2020 ITTF Men’s World Cup final, Ma Long was a man on a mission in Zhengzhou.

It was a mission he accomplished with flying colors as he claimed success for the sixth time since his first success in 2008 in Macao. He has now won the ITTF Final twice as often as his closest challenger, Wang Liqin, who triumphed three times in 1998, 2000 and 2004.

“I am very happy after winning such a tough fight. Every point was hard to win and I believe Fan Zhendong could feel it too. In the end it was just a great relief for me. At the table, Fan is second to none. this present moment. Since last year we have played against each other in several finals, including last week at the men’s World Cup, and he had the upper hand. In today’s game I really wanted to challenge him and luckily I managed to win . “- Ma Long

A semifinal place secured, Chen was imperious against the Chinese opposition. She defeated Sun Yingsha, the No. 3 seed, in straight games (9/11, 11-8, 11-8, 12-10) to get a showdown with Wang Manyu, a player in form. In the penultimate round, Wang had ended his hopes for the Japanese Mima Ito, the number 2 seed, with a powerful own performance (11-3, 11-4, 11-9, 11-6). That victory brought the 21-year-old to her first international final since last year’s ITTF Finals defeat to Chen Meng, but she was unable to retaliate against her unstoppable opponent.

“The first three games were very close. The difference was always by two points. Despite being in the lead most of the time, Wang Manyu kept closing the gap and the whole game was always tight. She was very determined and played very well. shots., which put me under a lot of pressure. I felt that she really wanted to win. She made mistakes in a few crucial moments, but I also made some myself. “- Chen Meng

Chen Meng has a record of 100% in ITTF competitions in 2020. She celebrated victory at the ITTF World Tour Platinum events in Germany and Qatar before the COVID-19 pandemic ended worldwide in March. Since the #RESTART Series kicked off in November, she has been the star of the show with gold medal classes at both the Women’s World Cup and now the ITTF Finals.

The Bank of Communications 2020 ITTF Finals represented the third and final event of the #RESTART series, announcing the return of international table tennis after eight months of suspended operations due to COVID-19.

Table tennis is one of the first sports to return to the international scene since the pandemic erupted and the #RESTART series has been a resounding success, bringing action, drama and emotion to the entire global fan base. The events are conducted strictly in accordance with COVID-19 protocols to ensure the highest health and safety standards for athletes and everyone involved in the events.

Now the focus is on WTT Macao, a special promotional showcase to be held between 25-29 November 2020 that will provide a first glimpse into the sport’s future. World Table Tennis (WTT), which is responsible for all global commercial and event activities, was created to take the sport to exciting new heights by taking a fresh look at the way table tennis events are organized.

WTT Macao has an exciting original playing format and will showcase many of the sport’s biggest stars in all-new WTT surrounds. It is a moment that certainly catches the eye and leaves a special legacy for the sport. Stay tuned!

[Cek Fakta] Gibran Rakabuming Complains of being bullied? These are the facts

Even Harry Styles in Jorts can’t save the Guccis miniseries