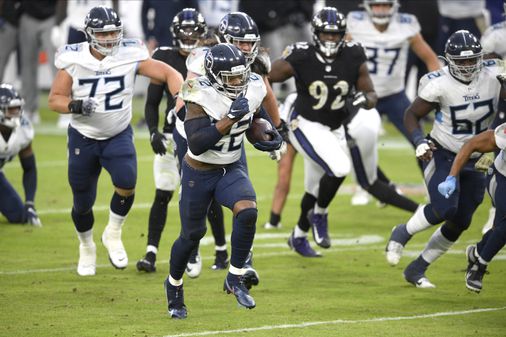 BALTIMORE Derrick Henry ran for a 29-yard touchdown with 5:21 remaining in extra time to defeat another memorable performance against the Baltimore Ravens, and the Tennessee Titans rallied for a 30-24 victory on Sunday.

Henry ran into a patchwork Ravens line of defense, finishing with 133 meters on 28 carriers. It was his sixth 100-yard game of the season, taking him past 1,000 yards for the third straight year.

It was reminiscent of Henry’s outing last January when he wandered 195 yards to take the Titans to a 28-12 upset of the best-placed Ravens in the AFC Divisional playoff.

After forcing a kick to go into extra innings, Tennessee (7-3) advanced 73 yards in six plays to get back on track after losing three of his previous four games.

Baltimore (6-4) has lost two straights and three of four. Until the fourth quarter, the Ravens did a pretty good job of stopping Henry with no injured defensive linemen Calais Campbell (calf) and Brandon Williams (ankle).

Tennessee followed with 21-10 early in the third quarter and 21-16 late in the regulation, before launching a 90-meter run with Henry’s run and some precise throws by Ryan Tannehill.

In third place of the Baltimore 14, AJ Brown caught a short pass to the right and broke four tackles before scoring while standing up with 2:18 left. Tannehill walked into the conversion to make it 24-21.

Lamar Jackson then drove the Ravens to the Tennessee 10 before Justin Tucker kicked a 29-yard field goal with 15 seconds left to force overtime.

Jackson went 17 for 29 for 186 yards, and JK Dobbins, who saw the most extensive action of his first NFL season with Baltimore, rushed 70 yards on 15 carriers and scored a touchdown in the second quarter.

Baltimore went up, 21-10, on a 31-yard touchdown pass from Jackson to Mark Andrews. The Titans used a few field goals from Stephen Gostkowski to finish, paving the way for an exciting fourth quarter.

Baltimore allowed the Titans to march 79 yards for a touchdown on their opening ball possession, but bounced back to take a 14-10 halftime lead.

Henry only had 37 yards rushing on 13 carries in the first half.

Baltimores Dez Bryant had four receptions for 28 yards, all in the third quarter, his first catch in an NFL game since December 31, 2017 with Dallas. 32-year-old Bryant quit his career with the Cowboys after the 2017 season, tore his Achilles tendon in 2018 and was inactive last season.