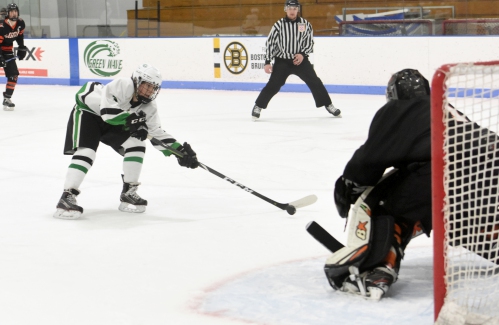 After a 3-3 draw with South Hadley on Saturday, the Greenfield hockey team wanted to come out of the opening puck drop on Wednesday against Chicopee Comp and the playing style of hockey.

The team did just that, scoring three goals in a three-minute period in the first period to pave the way for a 4-2 win at Fitzpatrick Arena in Holyoke.

It was a great high school hockey game, said Greenfield coach Adam Bouchard. Comp is a good team. It was a fun atmosphere for a game.

Kyle Barnes got the score going for Greenfield, fired down the left side and fired a bullet over Colts goalkeeper Victor Canavan’s glove. Just 17 seconds later, Kevin Baumann tore a twisted wristband off the blue line of a Barnes dish to make it 2-0 late in the first period.

Just over two minutes later, the Wave scored their third goal of the opening period. Brodie Gagne scored his first varsity goal in his career and took advantage of a scrum in front of the net to make it 3-0.

We came out and played Green Wave hockey, Bouchard said. We executed on our breakouts, our front neck, we cycled the puck and we choked their powerful score line.

David Girouard put Chicoppe Comp on the scoreboard 4:49 in the second period after a 3-for-1 break. Greenfield goalkeeper JoshuaBordeaux who finished with 25 saves stopped the first two shots on the break, but Girouard posted the third rebound,

With 4:06 to play in the period, the Green Wave got that goal back with a short position. Aidan Roche made a play in the neutral zone and sent the puck to Devin Niles for a breakaway. Niles put a handy shot over Canavans stick to set up Greenfield, 4-1.

The Colts converted to the same power play after Niles short-hander, when a Mason Whitehead wrist shot from the blue line made its way into the net.

Neither side produced a goal in the third period, although the Green Wave had a 10-5 lead in the latter period.

We came out with a hard front neck, Bouchard said. We buried them in their zone for most of the period and Joshua Bordeaux made some huge mountains along the stretch.

Greenfield will be back in action today, facing Southwick at Collins-Moylan Arena. The puck drop is set at 4 p.m.

The Mohawk Trail and Amherst Nordic ski teams took part in a relay race on Wednesday, with each relay team consisting of two boys and two girls, each skiing a 1-mile loop.

The Warrior teams took first and second places, while Amherst settled for third and fourth.

The first team at Mohawk Trails consisted of Dennis Simmons, Sylvie Mahon-Moore, West Williams and Katarzyna Wisnauckas and took first place with a time of 19 minutes 45 seconds. The second team of Warriors from Vincent Gauthier, Kala Garrido, Augustus Niswonger and Eleanor Meunier came in second with a time of 21:21.

In third place was the Amherst team of Ryan Yanko, Zoey Candito, Owen Candito and Maddy Parker with a time of 21:37. The second team of the Hurricanes of Max Rogoski, Ava Zimmerman, Kyle Yanko and Grace Wilkinson finished fourth with a time of 22:00.

The second Mt. The Institute Ski League Race took place in Berkshire East on Wednesday, with the Northfield Mount Hermon girls taking a first team win at Deerfield Academy in the nick of time.

Big Greens Claire Patton took first place overall on the slalom course, crossing the line with a combined time of 72.15 seconds between the two runs.

For the Hoggers, Izzy Campbell was the best finisher, finishing third in the overall standings with a combined time of 74.21 seconds. Olivia Weinstein was not far behind and finished fourth with a time of 75.02.

Arden Bacon (sixth) and Hillary Leeds (10th) were the other NMH top 10 finishers.

On the boys’ side, Deerfield Academy had the top four finishers to secure a team from first place. The Hoggers settled for third place.

Alex McCullough was the only NMH racer in the top 10, finishing seventh.