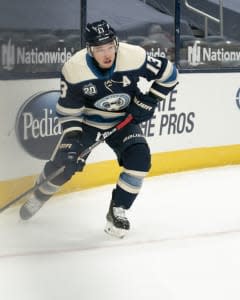 We’ve postponed quite a few games due to COVID-19 in this NHL season, but recently it was again the culprit. The Stars have put their third game in a row on the back burner due to bad weather in Texas. However, there are still nine NHL games on Thursdays, leaving plenty of options for your everyday fantasy lineup. Here are some players to target and avoid for your squad.

Cal Petersen, LOS at ARI ($ 29): It seems that the Jonathan Quick era is over in Los Angeles. Petersen has gotten the bulk of the starts this season, racking up a serve rate of 2.49 GAA and 0.926. The Coyotes have scored 2.60 goals per game, which isn’t bad, but they’ve only made 27.7 nets per game. It’s hard to score when you shoot so little.

Igor Shesterkin, NYR at PHI ($ 30): The Rangers felt they could allow it Henrik Lundqvist to leave because of Shesterkin’s presence, and so far that has been delayed. He’s posted a bailout rate of .918 as the main goalkeeper for the Broadway Blueshirts. The Flyers are having issues with COVID-19, but they’ve also scored 3.54 goals per game, so when this game happens, I’m concerned about Shesterkin’s advantage.

Ryan O’Reilly, STL vs SAN ($ 22): O’Reilly has made a steady contribution this year as he has at least one point in 10 of his last 12 games. He also has three power play points and averages 2:50 per game with the extra man. The Sharks had one of the best penalty kills last year, but they are in the bottom half of the league this year and they also have a GAA of 3.57.

Evgeni Malkin, PIT vs. NYI ($ 23): Are we seeing the beginning of the flip side of Malkin’s career? He may be a future Hall of Famer, the 34-year-old has only seven points in 14 games. Maybe he turns it around. On the other hand, on Thursday, he will face an Islanders team with a 2.20 GAA and which has allowed only 27.4 shots to the net per game.

Cam Atkinson, CLM vs NAS ($ 20): Atkinson had a tough campaign last year, but he was more like the man who recently scored 41 goals two seasons ago. The winger has nine points and 21 shots on goal in his last six games. He also averaged 2:31 per game with the extra man, and the Predators have the 30th-seeded penalty kill.

Alex Kerfoot, TOR vs. OTT ($ 14): What’s better than facing the team with the highest GAA in the NHL? To face them at home for the second time in as many nights. The Leafs get another chance on the Sens, which offers a good chance to save some salary. Kerfoot is listed as a grand piano on Yahoo, although he plays third line for the Leafs. He also has four points in his last five games.

Kirill Kaprizov, MIN at ANA ($ 17): Kaprizov has nine points in 12 games, but he also played 4:19 a game with the extra man, and that will likely drop a bit unless Minnesota opponents continue to take an inordinate number of penalties. Anaheim’s offense has been moderate, however John Gibson drives the team with a 2.33 GAA and a 0.921 savings rate.

Kyle Palmieri, NJD and BOS ($ 17): Palmieri is back from the COVID-19 list, but he has yet to score in nine games. I’m not sure this will be the game where he gets on the scoresheet. The Bruins are second in both GAA and penalty kill percentage, and that’s what’s to be expected based on how Tuukka Rask and company have looked into recent campaigns.

Seth Jones, CLM vs NAS ($ 18): Finally Jones looks more like himself. While he has eight points in the season, seven have come in his last seven games. His 2.6 percent shooting is also likely to improve. Meanwhile, the Predators have a 3.47 GAA. Time for Jones to take one over to his former team!

Rasmus Dahlin, BUF at WAS ($ 12): Dahlin has already had two 40-point seasons to his credit at the age of 20, and he still has room to grow. This year, he’s started with 60.5 percent of his offense zone shifts, the highest among Buffalo defenders, and he’s also averaged 3:54 per game with the extra man. As for the capitals, they have a GAA of 3.57, in part because they allowed 32.0 shots to the net per game.

Kris Letang, PIT vs. NYI ($ 20): Where Letang has played better than his teammate Malkin, the defender has not yet scored a goal this season. Will he eventually light the lamp? Certainly yes, but I’m not betting it will happen to the islanders. And last but not least, Semyon Varlamov has a serve rate of 1.89 GAA and .931, and his defense keeps him from being too busy either (27.4 shots to the net per game).

Drew Doughty, LOS at ARI ($ 19): Placing Doughty in your lineup has typically paid off this season, but his 17.4 percent withdrawals will no doubt drop to the average. It could happen against the Coyotes on the road Thursday. Darcy Kuemper had a few bad starts against Vegas to start the season – totally forgivable – but since then he’s had a 1.79 GAA and 0.934 serve over nine starts.