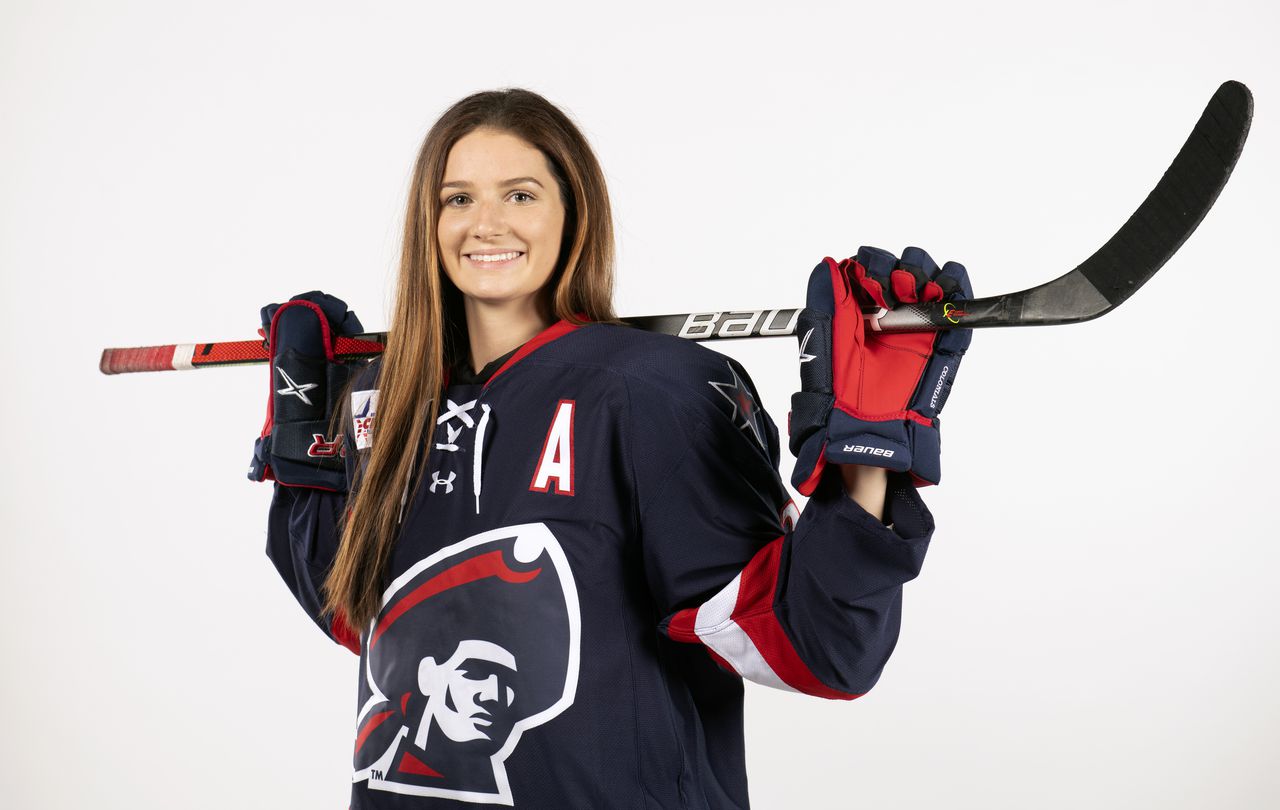 Syracuse, NY – Sophia Burns and Emilie Harley both learned to love hockey growing up in Central New York, and now they use their voices to make sure the sport is attractive and inviting to a wide variety of future players.

Harley is a senior defender with Robert Morris who went to Jamesville-DeWitt and played youth hockey in Syracuse. Burns is a sophomore striker at St. Michaels who went to CBA and played on that school combination team with Skaneateles.

The two players have recently been selected for the new College Hockey for Diversity, Equity & Inclusion initiative. That group, made up of players, coaches, and administrators of men’s and women’s hockey from around the country, works to promote cultural change across the sport.

Hockey, and sports in general, is often a place where you are told to leave your luggage when you walk in the door. So yes, you want to focus on the practice or the game, but I don’t think hockey has to be this isolated bubble and people should be free to talk and talk about the issues, said Harley, whose brother Thomas plays. in the Dallas Stars organization.

Race and inequality are topics that get hit on their toes by people who are afraid to say the wrong thing. And that’s part of the problem. We need more people who are proactive, have good intentions and are willing to make a change instead of stepping aside.

Harley and Burns recently discussed issues related to this initiative and their role in making a difference.

The state of diversity / inequality in hockey

Burns: Most of the competition I’ve played with is predominantly white. And I am grateful that I did not experience anything here. But I know a lot of my fellow committee members who were in the west or played further south, they see it a lot more where insults and misconceptions like this are very, very common. I think it varies with where you are and what you are around, really. It’s not something that stands out. But it is something that is certain when you look deeper.

I think it’s an attitude. It’s different because if they walked past this person on the street, they wouldn’t necessarily say something like that. But when they see them play hockey or see them in an environment they don’t think they belong to, it comes out. And I think that’s a huge problem.

Harley: Growing up, there was only one year I can remember, and it was in a boys’ squad, that I once played with black players. And when I went from boy hockey to girl hockey, there was absolutely no diversity whatsoever. So it is very clear to see that the distribution of hockey players, especially among the pros, is mainly white and comes from the upper middle class.

Why these problems still persist

Burns: I think it starts with the basics, really. These youth programs are not getting the full education they should have because they are not exposed to it as often as they should. We’ve seen everything that’s happened this summer. Inequality has been going on for decades, years, generations, since the beginning of time.

Harley: I think there are many reasons. But number 1 is that the history of racism and oppression is actually not that long ago. I think sometimes you have to sit and put it in perspective because it takes a really long time for people to admit their mistakes and even longer to fix them. The way I see it, a lot of work has been done so far to get the ball rolling. And so now we were jumping on the train and hopefully we can make these things a lot faster.

Realistic objectives of the committee

Burns: Our mantra is shifting at the same time, there are, addressing things as they happen. We know that we couldn’t make this change overnight because of how long it has been around. I think the most important thing for me is to show these kids who think they can’t play hockey, that they are not alone, we stand behind their backs and we support them. We assist them. We have to change the culture and the stigma to show them that play is possible.

Harley: Some of the original goals, I would say, are certainly just to educate people. And that includes diversity training for coaches, staff and hopefully players, anyone involved in NCAA hockey. Personally, I see racist insults and other offensive language in-game being punished in the same way as hits from behind.

I certainly think one of the great things we would work on is building from the ground up with youth initiatives, mainly targeting minority groups to get children involved. Just end up building a better locker room culture by getting people out of that mindset of I’m uncomfortable, or it won’t affect me.

Their message to younger players begins

Burns: I would say if hockey makes you happy you should do it. And you should do it with pride. And you have this community that is behind you. I would like to let them know that they are not alone. It will be difficult sometimes, because that’s how it has been. We make that change for them. And they have so much support behind them.

Harley: I would encourage anyone who wants to do something to clearly go for it. And if they go for it and feel like they are being knocked down, held back, or treated unfairly, I would say most people make fun of or bully others for being jealous or afraid or angry. And I’ve always learned that the best way to shut them up is to beat them on the scoreboard. So if you practice harder than anyone else, you’ll be better than anyone else, and don’t be afraid to be unique or let anyone else tell you that you don’t belong.

Burns: I have certainly seen a change. I think it means so much to me to be a student athlete and play hockey at this level. And I think of the platform that we have by being at this level that was given. I think we make changes where change is needed is something we should all be doing.

Harley: I think it’s just important that if you want to be public about things that you do your homework and think about what you’re going to say or what you’re going to do before actually doing it. I am quite comfortable speaking and being seen and sharing my opinion. But there are many ways to become less publicly involved. At the end of the day, I would rather make a few mistakes as an active participant in change than look back and regret being a perfect observer.