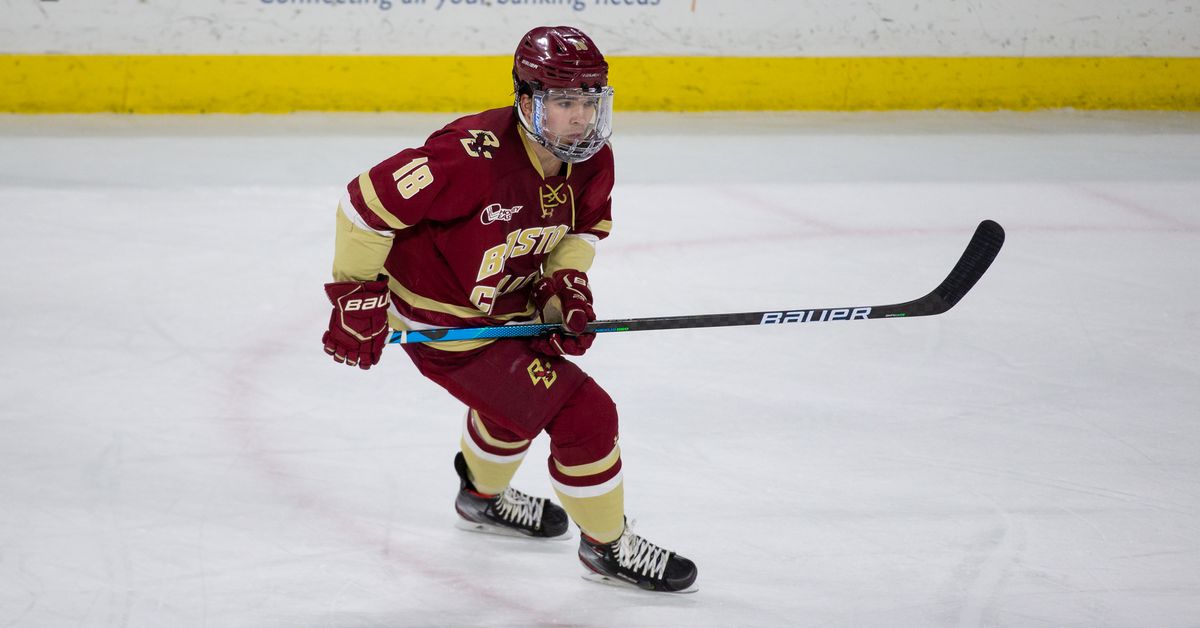 It wasn’t always nice, but the Boston College men’s hockey team beat Maine 4-2 on Friday evening. Matt Boldy scored two goals, Marc McLaughlin and Alex Newhook added one each, and the Eagles did just enough to beat the Black Bears, despite clearly not having an A game for much of the evening.

The two teams played a scoreless first period with only a few good scoring opportunities but a lot of penalties. BC had two power play chances that were wiped out early when they took penalties themselves and neither team was able to roll their lines as they would have liked. The Eagles got some decent looks on the net thanks to Matt Boldy and Nikita Nesterenko, but they couldn’t get anything past Maine goalkeeper Matt Thiessen. Marshall Warren got a bad trip penalty at the end of the period while already gritty for giving Maine some extra time at five-to-three to start the second period, but for the most part it was an ugly first 20 minutes to starting the weekend.

However, it was BC who took advantage of playing the special teams, when Matt Boldy scored the teams’ seventh shorthand goal of the season to put the Eagles 1-0. After killing the first penalty to start the period, Boldy picked up the puck on the left wing in space and was able to skate all the way into the attacking zone. He cut to the center before making a turn that ended with a backhanded shot that defeated Thiessen for the first goal of the match. The lead didn’t last as Maine leveled things out a few teams later on a goal from a bit of a broken odd-man rush. A deflected pass put Spencer Knight out of position and gave the Black Bears a wide open net to shoot at. There was some contact with Knight on target, but the original call was held up after a brief review.

BC got their lead back with about 12 minutes to go when Marc McLaughlin posted a rebound for his ninth goal of the season. The game was started on a great front technique by Casey Carreau, when he forced a turn behind Maine’s net before stepping forward and putting a wrist shot on the net. Thiessen made the original save, but McLaughlin was right through the fold to take the 2-1 lead. That was it for the scoring in the second, despite some scoring opportunities for both sides. Spencer Knight had to make some nice saves, including one on a two-for-one rush from Maine, but he was up for the task and the Eagles took their one-goal lead to third.

Maine made a tie in just over eight minutes in the third period, using consecutive BC penalties and scoring while having a 5-on-3 advantage. Knight got over his crease just a little late and was hit through his five-holes on a quick shot from the left circle. Alex Newhook regained the lead a few minutes later with a power play goal of his own, scored on a rocket from a blow shot straight from the faceoff to start the man advantage. Newhooks’ shot was well placed and passed Thiessen right under the crossbar. Maine pushed past goal and wanted to have their goalkeeper withdraw, but Carreau made a great move on the front to force a penalty with just 1:34 left. Maine eventually took out their goalkeeper, but Matt Boldy was able to throw the puck from his own zone into the Black Bears’ net for his second goal of the night to take the victory for BC.

This was an ugly long-distance game – especially in the beginning – but the Eagles could do enough to bring home the win. With Hockey East’s rankings so close to the top, that’s really the most important thing every night. They’ll expect a similar result tomorrow when they finish the weekend series with Maine at 5:00 p.m.

Women dressed as elderly caught getting vaccinated against COVID-19