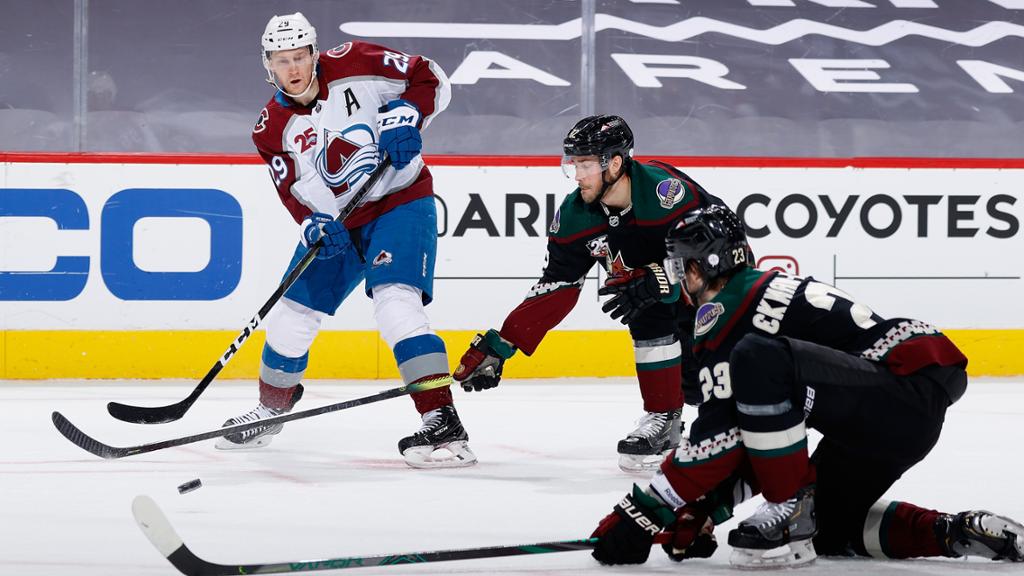 The Colorado Avalanche looks set to take its eighth straight win in the second half of a back-to-back set against the Arizona Coyotes on Tuesday.

The Avs took a 5-1 win over the Coyotes on Monday, improving to 20-8-2 in the season and 7-0-0 over their last seven games. Joonas Donskoi registered two points for his first multi-goal game of the campaign – extending his points run to five games – and Mikko Rantanen His team-leading fifth game-winning goal of the year scored, accumulating at least one point for the sixth consecutive game. Tyson Jost and Valery Nichushkin each added two assists, while the goalkeeper Philipp Grubauer stopped 24 of the 25 shots for his 19th win in this campaign.

For Arizona, Oliver Ekman-Larsson found the back of the net for the first time this season, receiving assists from Phil Kessel and Tyler Pitlick on the man advantage. Netminder Antti Raanta made 30 saves in his second consecutive start.

Tuesday’s game marks the end of the Avs’ fifth back-to-back set in their 56-game schedule, with the club still having four such sets left this year. Colorado is 2-0-2 so far when he played on the second consecutive evening.

Derick Brassard from Arizona closed the 2018/19 season with the Avalanche… Head coach Rick Tocchet from Arizona was assistant coach for Colorado from 2002-2004.

Colorado has a record of 51-31-10 ever against Arizona (since 1995-96), with a 7-6-0 record when facing the Coyotes in the second half of a back-to-back set. The Avs have visited Arizona when they played eleven times in franchise history on the second consecutive night, scoring 5-6-0 in such matchups. This season, the teams have faced each other in one back-to-back set so far, with the Avalanche winning the second game of the series 6-2 on February 27.

Tuesday’s meeting is the last game between the clubs at the Gila River Arena this year. The squads will meet twice more in Ball Arena on March 31 and April 12.

Colorado has used the same line-up for two consecutive games and will likely use the same skaters on Tuesday. Goalkeeper Jonas Johansson was able to get his first start in an Avalanche jersey, although head coach Jared Bednar didn’t say who would start in the net on Tuesday after Monday’s win.

Defender Conor Timmins has been almost medically cleared of his upper body condition while Pavel Francouz (lower body) and Erik Johnson (upper body) both for a long time with injuries.

Tuesday’s game will close Yotes’ fourth back-to-back set of the season. In the second game of such sets, the club has a 1-1-1 record, averaging 3.67 goals per game and 4.33 notches per game.

(AGAINST) PLAYER TO WATCH: ALEX GOLIGOSKI

On Monday, Alex Goligoski skated in his 900th NHL game and has amassed 80 goals and 329 assists since entering the league. Goligoski is in his fifth campaign with the Coyotes and is second on Arizona’s blueline in points (132) and assists (107) since joining the club in 2016-17, while finishing third with 25 markers. In 37 all-time encounters with the Avalanche, the veteran has scored three goals and 14 helpers, with one assist in five games this season.

The defender leads the Yotes this year with 60 blocks and is second in time on ice per game, averaging 22:21 a night. Goligoski has provided two assists in 32 games this campaign.

Colorado has won the best seven consecutive games and has the longest active winning streak in the NHL. In the seven games, the Avs have outperformed their opponents 32-8, found the back of the net 4.57 times per game and gave up just 1.14 goals per game.

The Avalanche has outperformed its opponent in 17 consecutive games and has a record of 17-6-1 beating its opponent this season, the most wins in the NHL by putting more pucks on the net.

Colorado has a 5-1-0 score in its last six away games and an 8-4-1 road record this year … In the second half of back-to-back sets this season, the Avalanche has a 2- 0-2 point … The Avs have won two consecutive games against Arizona and have a 4-1-0 campaign record against the club … Nathan MacKinnon is at a season-best, six-game point streak, good for four goals and six assists all along the stretch … Gabriel Landeskog has registered a point in five consecutive games, scoring two goals and seven assists in that period … Avalanche head coach Jared Bednar took his 165th victory on Monday bank boss in Colorado, putting him level with Marc Crawford for third place in franchise history. Bednar has a career record of 165-44-37 (.530) … Valery Nichushkin this campaign has recorded three multipoint appearances with two assists in Colorado’s last game, his most multipoint appearances in a season since 2015-16 (four) … The Avalanche has scored in 17 consecutive bouts and the club has 3, 40 goals per game average ranks third in the NHL.

UK school asks parents to cover up and dress modestly