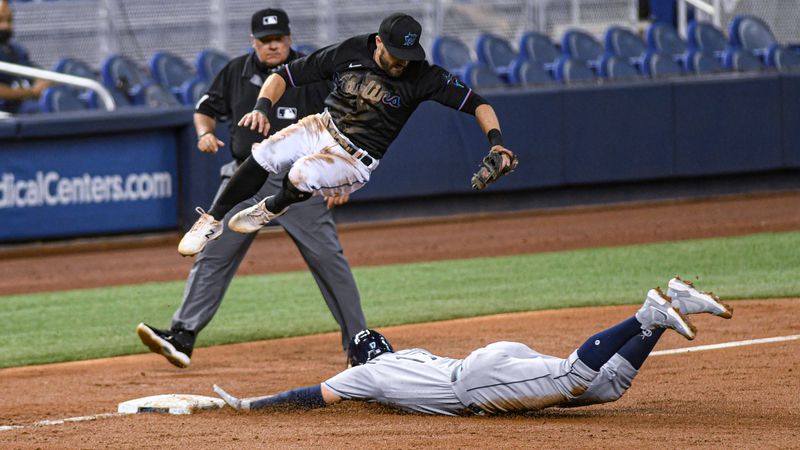 MIAMI And on the seventh day did the Rays rest?

A strange planning decision put the team in an unusual position, with Sunday taking the first Sunday of the season off.

Very bizarre, ‘said manager Kevin Cash on Saturday. Having a Sunday off in the big leagues is just not something you normally see, and definitely Easter Sunday. ‘

The reasons are related to starting the season with an interleague opponent.

With a game-wide opening day on Thursday and an interleague series limited to three (or in some cases two) games, the Rays and Marlins couldn’t play all four days, as some teams with opponents within the league do.

With a retractable roof, there was no need to be off Friday as a possible rain makeup day for the opener, as teams with open-air stadiums plan.

So that left the league officials, in consultation with the Marlins, to decide, and they chose three consecutive games and then a day off. It could be for baseball reasons, when managing the bullpen. Or maybe Easter play has not been taken into account.

As a result, the Rays have a scheduled Sunday off-day for the second time in 24 seasons. The other was of choice, when they left on August 26, 2012, to allow for an additional day of preparation for an event at Tropicana Field in connection with the Republican National Convention held in Tampa. (The Giants and Mariners are also free on Sunday after three consecutive games.)

Taking advantage of this, the Rays stayed in Miami on Saturday night before planning to fly to Boston late Sunday afternoon, where temperatures will be high in the 50s.

The Rays also have a rare Friday off this year, May 28, so a two-day interleague series with the Phillies in the Trop can be played on Saturday and Sunday.

Port Charlotte is a vibrant place, with more than 150 players training daily.

That includes 28 active (and a few others) as part of the alternate group players sent down during spring training from which the Rays can top up their roster, functioning as the Triple-A team for the time being.

And there are about 125 others, mostly less advanced players, who opened the postponed minor league camp on Saturday, with a month of practice ahead until the scheduled start of May 4 of the season.

Workouts are split for protocol reasons, so the minor leaguers have the morning shift and the alt site group the afternoon / evenings.

The Rays are planning games against the two other Florida-based alternate-site teams, the Jays (Dunedin) and Marlins (Jacksonville).

Also, a replacement would soon have to be named for Double-A pitching coach Brian Reith, who was recently appointed to the big league-staff to assist coaches Kyle Snyder and Stan Boroski.

The alternate selection of training locations, with the maximum of 28 in Port Charlotte, plus four currently in the big-league taxi squad (listed with an *) after Joseph Odom was added to the major-league roster:

Michael Wacha is expected to start in Boston on Monday instead of throwing behind an opener, although Cash said they could take another look. Opening day starter Tyler Glasnow remains on a five-day schedule and pitch Tuesday, with Ryan Yarbrough on Wednesday’s matinee road-trip finale.

Cash continued with his plan to put players in a resting position, as outfielder Randy Arozarena, second baseman Brandon Lowe and first baseman Yoshi Tsutsugo were not in the line-up.

The Marlins had the large windows on the left field open in LoanDepot Park, but the roof was closed because of high winds, which could affect the closing. Attendance was 6,179 in remote pod seats.

Paul Campbell, taken over by the Marlins from the Rays in the minor league Rule 5 draft, made his debut on Saturday and worked two innings after starter Elieser Hernandez took off with an apparent blister problem.

Sign up for Rays Report’s weekly newsletter to get fresh perspectives on the Tampa Bay Rays and the rest of the majors from sports columnist John Romano.