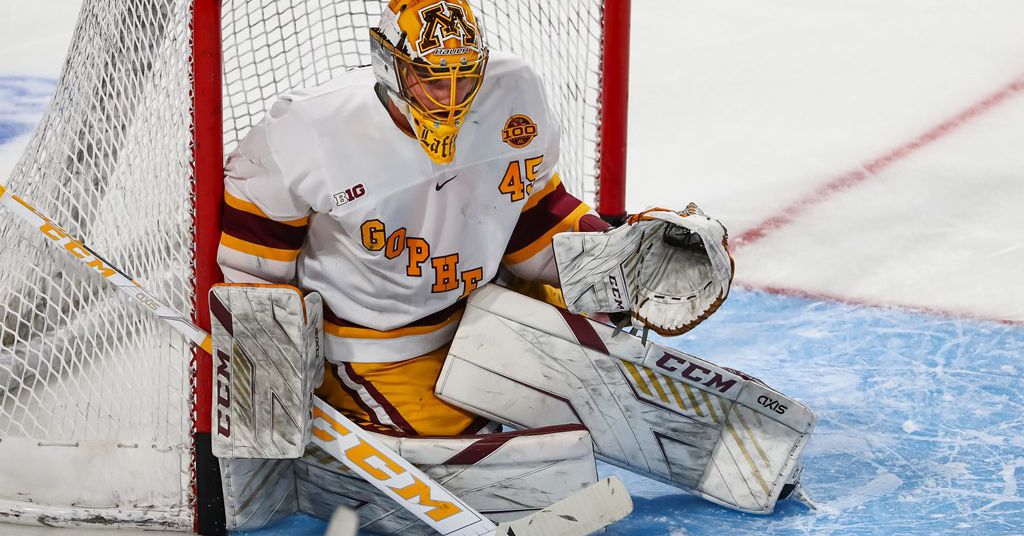 The Minnesota Golden Gophers hockey team has been getting some unfortunate but not unexpected news and excellent news in recent days. It was announced on Friday that Gopher goalkeeper Jack LaFontaine had decided to stay with the U for one more season instead of signing a professional contract with the Carolina hurricanesHe will return for his third season as a Gopher as one of the country’s top returning goalkeepers. On the other hand, it was announced on Saturday that Gopher junior forward Sampo Ranta would leave the U early and sign a professional contract with the Colorado AvalancheRanta may be making his professional debut with the Avalanches AHL team, the Colorado Eagles, in the same arena where he ended his collegiate career in Loveland, Colorado last weekend.

The best news of the week game Friday when the U announced that Lafontaine would be returning for a fifth college season and a third with the Gophers in 2021-22.

Lafontaine had the best statistical season a goalkeeper has ever had as a gopher last season, adding a laundry list of accolades including the Big Ten Goaltender of the Year, a First Team All-Big Ten selection and the Most Outstanding Player of the Year. Year. Big Ten tournamentLafontaine is one of three remaining finalists for the Mike Richter Award, a candidate for All-America honors, and one of three Gophers running for the Senior CLASS Award. He was also the 16th Gopher and the third U-goalkeeper to be named a finalist for the Hobey Baker Award. With BC’s, Spencer Knight signs with the Florida Panthers and Dryden McKays future with Minnesota State up in the air after Frozen four, Lafontaine is arguably the best returning goalkeeper in college hockey next season. It’s a good thing too, as Gopher back-goaltender Jared Moe has put his name in the transfer portal and won’t be returning to the Gophers next season. Minnesota added a goalkeeper in Champlin Park grad and current Fargo Force goalkeeper in the USHL Brennan Boynton. He’s coming in as a freshman next fall.

I am so excited and honored to announce that I am continuing my education and will be playing Division 1 college hockey for the University of Minnesota. I want to thank my family, friends, coaches, teammates and everyone who helped make this dream come true! #GoGophs pic.twitter.com/bGZR6N9kCE

The Gophers got the bad news on Saturday that they would lose Sampo Ranta and his senior year of eligibility for the pros next season. Ranta signed with the Colorado Avalanche of whom he was a third-round pick in 2018. He will report to the Avalanches AHL team, the Colorado Eagles, and could make his professional debut on Tuesday-evening. A First Team All-Big Ten roster this season, Ranta led the team with career highs in goals with 19 and points with 31. Ranta’s 19 goals placed him second in the country in this season’s scoring. The forward scored 67 points (37 goals, 30 assists) in 102 career games with the Gophers.

Senior Scott Reedy joined Sampo this week and signed a professional contract. He signed with the San Jose Sharks where he was a 4th round pick in the 2017 draft. Reedys’ official contract will start next season, but he is expected to join the Sharks AHL team the San Jose Barracuda on an amateur tryout basis for the remainder of this season. come. Reedy skated in 132 career games during his four-year career with Minnesota, scoring 77 points (40 goals, 37 assists).

Minnesota is also likely to lose a few other players to the transfer portal. In addition to Moe, a trio of Gopher seniors in Brannon McManus, Cullen Munson and Sam Rossini have entered the portal to indicate that they will not use their bonus year of eligibility in Minnesota. Sophomore Noah Weber is also in the portal. He hadn’t played a game for the Gophers in two seasons while dealing with injury issues.