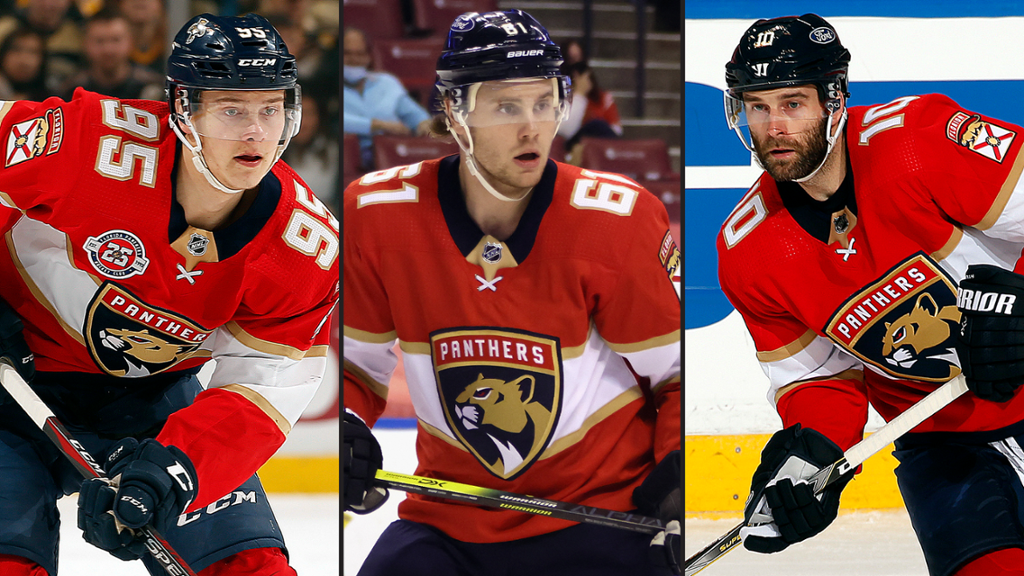 The newly acquired veteran forward Brett Connolly and young defender Riley Stillman will have the most direct impact on the current team along the long track looking for a berth for the playoffs, but an important piece going forward could also be the Blackhawks’ takeover of Henrik Borgström’s former first round NHL rights.

“I think it’s a great position to be in, to gather young players to deepen your team in the future, but also to gain experience now,” said President of Hockey Operations and General Manager Stan Bowman. “That’s what it’s all about.”

Borgström, the No. 23 overall choice in 2016, was a dominant force in two years at the University of Denver. He scored 95 points (45G, 50A) in 77 games, while capturing a national title in 2016-17 and finishing fourth in the nation in scoring in 2017-18. That last season in Denver, he was a teammate of the current Blackhawks defender Ian Mitchell, whom Bowman watched regularly.

“Every time you went to see Denver during that time, Henrik was a dominant college player. One of the best college players I’ve seen in the last 10 years. Really high-end skill and he did it all in college. for greatness in the NHL and it didn’t happen right away for him. Sometimes that’s the case for young players. There’s an adjustment to the NHL … I think if you look at his best game, it’s pretty impressive. “

The center played parts of three seasons for the Panthers, scoring 19 points (9G, 10A) in 58 NHL games and adding another 45 points (16G, 29A) in 73 AHL games with the Springfield Thunderbirds. A limited free agent last summer. Borgström went to Finland to play for HIFK Helsinki, scoring 19 points (11G, 8A) in 27 games this season.

“He has great reach and great skill with vision,” Blackhawks’ Assistant General Manager / Pro Scouting Ryan Stewart said of Borgström. “He can really skate. He can make plays and put his linemates to good use and create the kick and do dynamic things in one-on-one situations.”

“He’s a young player and sometimes the pace of the NHL game is the thing. Now he’s got another year under his belt,” added European Scouting Director Mats Hallin. “I think there will be another summer of physical training and speed – he knows what to do because he’s been there. That’s another positive. We think he’s ready for the NHL and I think he will be fine. do in Chicago, they style we play. “

While the future is hopeful for Borgström, the short-term impact of Connolly and Stillman could be felt in the coming days and weeks.

The team is currently figuring out their travel arrangements to join the group for the next few days – ideally riding to meet the Blackhawks in Columbus this weekend to avoid an NHL mandated quarantine period that involves travel with a commercial flight. It’s the same reason Vinnie Hinostroza made the 7 hours drive from South Florida on weekends to join the Blackhawks this week.

At first glance, the Stillman takeover looks like another young face on a busy Blackhawks blue line of the future, but the 2016 fourth-round roster brings a different playstyle than its new counterparts.

“He’s a different style from almost all of our young defenders that we have,” said Bowman. “The most important thing with him is his competitiveness, his aggressive style. When he’s on the ice, you know he’s on the ice. He plays hard. He’s proud of the defensive part of the game, which I think is important. You want to have players who can play and join the rush and create fouls, but I think you need to have some defenders who are really stable defenders and penalty killers and who can bring a bit of that competitive spirit. Riley is that way. I think it’s a very nice addition to our young defender we have here. “

Stillman appeared in eight games this year after skating 34 and five assists a year ago. He also has 26 points (7G, 19A) in 89 AHL games.

“He’s a strong, defensive, powerful D-man,” Stewart said. He likes to finish checks. He’s safe and easy with the puck. He’s a high character kid, won an OHL championship as one of the captains. Plays an intense game, not easy to play against. “Good stick. PK skill. Just a lot of raw assets to grow with. He’s still unproven in the NHL, but with the character and work ethic, we expect him to make a good transition.”

Connolly’s season has undoubtedly been disappointing so far with just four points (2G, 2A) in 21 games. It came in a smaller role with a strong Panthers forward, but doesn’t take away from his 22- and 19-goal seasons in the last two campaigns – not to mention 24 playoff games with six goals and three assists during Washington’s Stanley. Cup run three summers ago.

Under contract for two more seasons after this one, Connolly is arguably the biggest addition to this current squad who, at just 28 years old, can also serve a key member of the future with an offensive rebound.

“He was a good player last year, so it’s not like we’re trying to recapture something that was there five years ago,” Bowman said. “This happens throughout the league, it happens to players on our team – for whatever reason, their role changes when new players come in and whether it’s their performance or whether it’s other players who can and don’t get things. the same chances. What he has is difficult to do in this competition, which is to score goals. “

‘He is a great body. A long stick; a wide range. Great shot, ”Stewart added to Connolly. “He knows how to wander and find space and finish. Florida has a deep team up front, so he got pushed down and didn’t get the minutes he would produce (like in the past). and standing rough on the walls and finishing a few pucks with some instincts. “

With Monday’s trade deadline fast approaching, Bowman said the conversation around the competition is starting to heat up and the potential for more deals is still alive. However, one thing is certain: the long-term vision for its emerging group remains a top priority.

“I’m not hesitant to do more trades, but if this is the way it ends for us, that’s fine too,” he said. “We’re not here just to get on the board, we’re going to try to do things that we think fit our long-term view. If we can take a few more steps, don’t hesitate to do so. fit into the puzzle we’re trying to build. I think we’re in a good place now. “