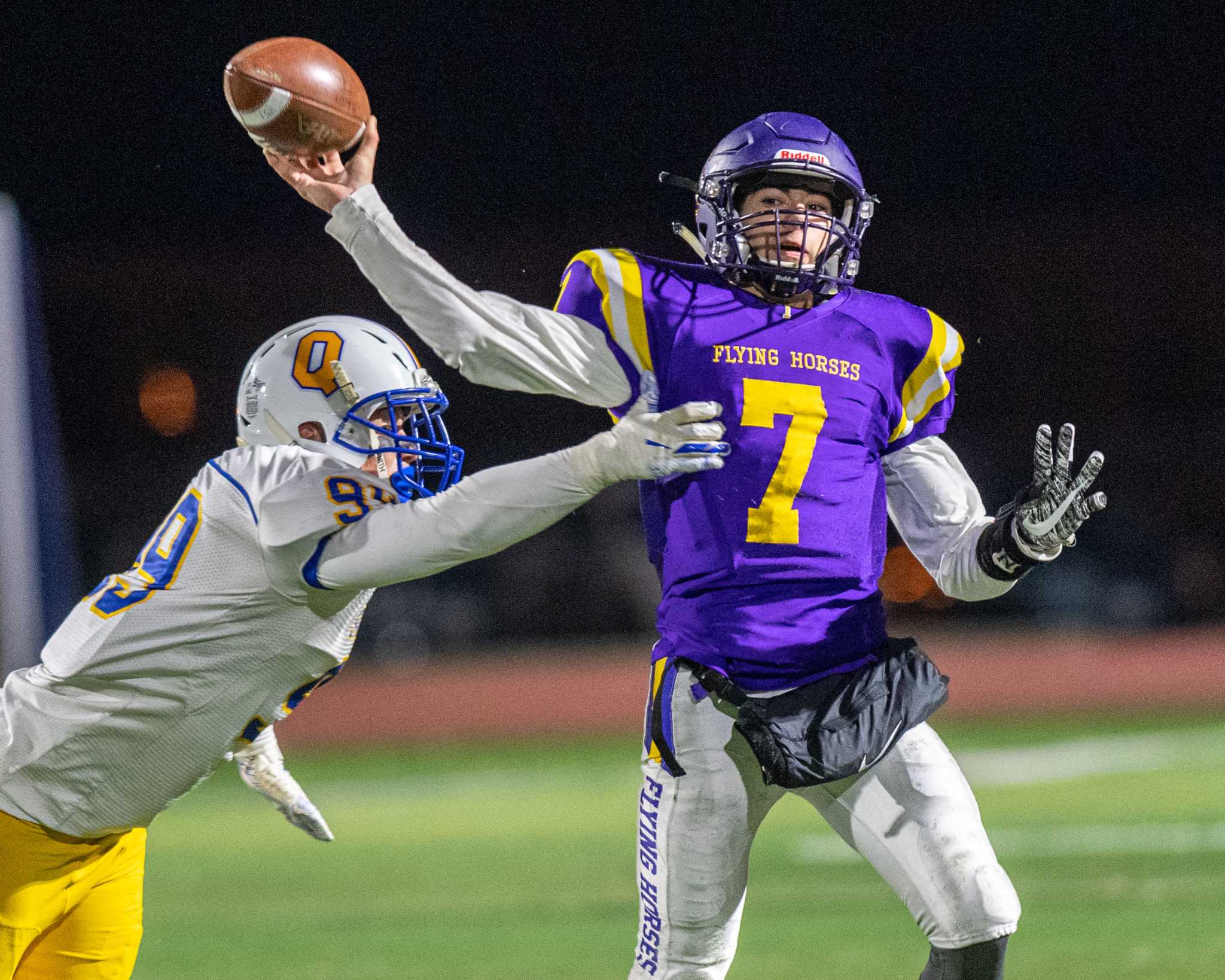 TROY – A fall without football wouldn’t be a season of downtime for Troy High senior Alex Wolfe. While the entire state was unable to play football in high school, Wolfe turned his attention to playing golf for the Flying Horses. In February and March, Wolfe played a prominent role in helping the Troy boys’ basketball team reach the final of the Suburban Council Tournament.

But as his time in high school grew shorter and shorter, Wolfe’s main sport has become football. Wolfe is a three-year starter to the Flying Horses as a quarterback and safety, and has one more mission to complete: lead Troy to a Class A title.

“I think it would be a good way to end the book, especially if a senior goes on top of it,” said Wolfe. “That is everyone’s goal. It would be special to wear the purple jersey and represent Troy High. It would mean everything. “

As a junior, Wolfe was seen celebrating Queensbury’s party at Shenendehowa’s Steuerwald Stadium after beating Troy 17-14 in the 2019 Section II Class A Super Bowl. Friday night, the Flying Horses (6-0) will take on Burnt Hills (6-0) for the standings title in a 2020 season competition held during the seven-week Fall Season II format.

Whatever the game is called, Wolfe wants to win it. He felt an opportunity was being wasted against Queensbury in 2019. Last week In the semi-final against Queensbury, Wolfe completed 6 of 10 passes for 154 yards and two touchdowns (both for senior running back Xavier Leigh) to go along with 43 yards rushing and two touchdowns in a 48-0 win. The senior will pass 56-for-85 in Friday’s game for 1,041 yards and 16 touchdowns.

“I just use (the 2019 final) as pure motivation,” said Wolfe. “I felt like last year exploited our weaknesses as a team, and even me as a player. I look back with things I could have done to change it. At this point in the season, it just gets the job done. I absolutely don’t want to feel like I had that night anymore. “

“He wants to leave his mark and legacy on this program to become one of those undefeated teams,” said Troy coach Bobby Burns. “I don’t care if it’s 13 or seven games, it’s an unbeaten season. It only happened twice here and they were special teams. This team has the chance to be a special team, but they have to get the job done. I think his motivation is there. Let’s hope we can play at the level we can play at. “

In addition to passing exploits, Wolfe has also rushed for six touchdowns. Being a three-year starter at quarterback at Troy is a rare achievement, something the senior doesn’t take lightly.

“Just being Troy High’s quarterback is special in itself,” Wolfe said. “I think it definitely has its own lane and since you start for three years, you have to have it.”

He got a little bit into it in his sophomore year. I didn’t know if he would be ready, but we had an injury and he ran to the ground, ”said Burns. “He has done so much work in the past three years. His goal this year was to win every game we played. He has really made himself a really good player on both sides of the ball. “

While more recognized as a quarterback, Wolfe has done a great job of safety.

“I think a lot of people (underestimate me as a defensive player) and I like that. I like being the underdog, ”said Wolfe. “That just gives me motivation and one more reason to go faster. I like to show people what I can do. “

“We’ve had some great protections in the past and some of them were quarterbacks,” said Burns, who led Troy to back-to-back Class AA state titles in 2016 and 2017. but also on defense. He’s just so proud of his achievements, being the leader of the team and executing the game plan. Alex has become an extension of the technical staff. He knows what we want on both sides of the ball. He’s having a great year and has one left to reach the goal he’s set. “

Wolfe’s older sister Sabrina Wolfe enjoyed a standout basketball career with Troy. The elder shares a trait with his sister that he is a ruthless competitor.

‘We would be at the house and argue all over. We would always compete outside and play one-on-one, ”said Wolfe. “I think our competitive position is what drives us both and it has made me the player I am today.”

“He hates to lose,” Burns said. Alex put so much into this. It would be a shame if we didn’t get it done. “

Wolfe, who is also running the Burns track, respects Burnt Hills and realizes he has to be his best Friday. He will compete in his last scholastic competition with the same mindset that he operated with this senior season.

“I’ve approached every game this year like I’m the best player on the field and try to prove it in and out every night,” said Wolfe. “I think we have shown as a team that we are some of the best to compete with here.”

Chipolo delves into AirTags when promoting one spot item tracker: “No accessories needed”