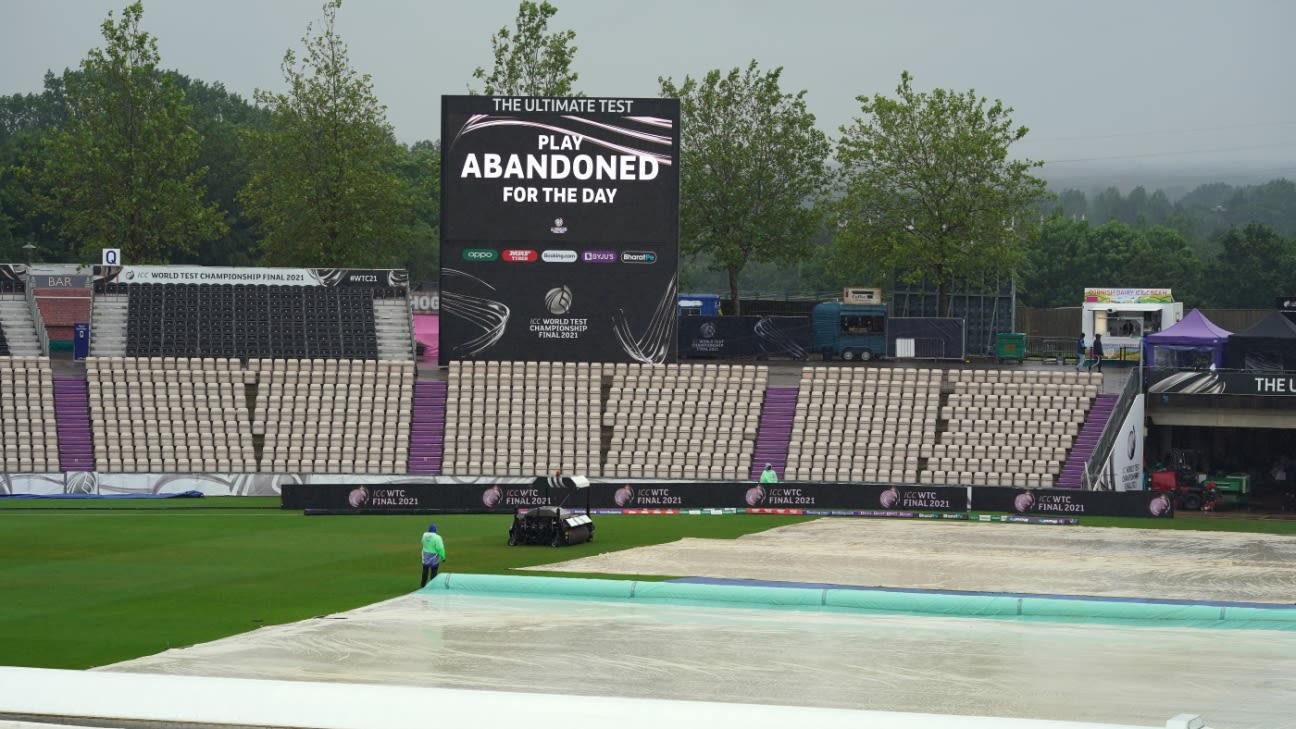 There are indications that both teams are not yet adjusting plans as they still have five days at their disposal, but India will call their XI ‘if necessary’ during the throw

India’s XI for the World Test Championship final has been chosen to “take the field and the conditions out of the equation”, according to their fielding coach, R Sridhar, who said he did not expect any changes to the team being made by the BCCI on the eve of the match, despite the fact that the first day of the match had been washed away.
The frustration on the opening day of the final, between India and New Zealand in Southampton, was mitigated somewhat by the provision for a sixth day reserve, which will now be activated in the event that the title cannot be decided in the next four years. playing for days. And for that reason, both Sridhar and Tom Latham, New Zealand’s vice-captain, agreed that there was little need for either side to formulate alternative plans.

“I expected this to be the first question,” Sridhar said. “I think the XI that has been announced is the XI that takes the field and the conditions out of the equation,” he added, referring to the team that India had named with two frontline spinners in R Ashwin and Ravindra Jadeja, alongside a trio of quicksand in Jasprit Bumrah, Mohammad Shami and Ishant Sharma. “I think it’s an XI that can play and perform on any surface in any weather. So that’s what I think this XI is all about, which we’ll put in the park.”

“But that said, the toss isn’t over yet, so we’ll…if it has to be made, a decision will be made at the time of the toss.”

New Zealand is still keeping their intentions secret at this stage. Kane Williamson’s hopes of recovering from his elbow problem will have improved with an extra day of rest after receiving a cortisone shot earlier this week, but their biggest dilemma revolves around the balance of their attack.

The prospect of further damp conditions for the rest of the week may yet lead New Zealand to ditch their spinner, Ajaz Patel, in favor of a five-man seam and swing attack. However, Latham said any such decisions would have to wait until the covers are removed and the team has a chance to assess the nature of the pitch.

“It probably won’t change much,” he said of the first day’s washout. “For us, it’s about adapting to the circumstances we face, whether it’s tomorrow or whenever it may be.

“With the extra day we have in store, the game can still play the full five days … so it’s important that we don’t get misled. We’ve been in this situation many times, because cricketers, And I think it’s about trying to stay ready when we’re called up.”

“We have not yet confirmed the final XI,” he added. “I’m sure Kane and Steady [coach Gary Stead] We have a few contingencies, but like I said, we’ll have to wait for the canvas to come off and we’ll have a chance to play.”

In the meantime, the challenge for both teams was to keep their focus on the long-term goal of winning this one-off test, while also taking out for the short term. Latham admitted that the New Zealand dressing room had mainly achieved this through table tennis and darts, but the simultaneous Women’s Test against England in Bristol had given India’s men a separate match to participate in.

“From day one, we haven’t missed anything from the girls’ competition,” said Sridhar. “We’ve all seen the game. It’s going on live in our rooms, in our team room, in our breakfast room and even today as we wait for the rain to stop. We all sat together and watched the girls play and cheer on our girls.

“We know they’re fighting to get back into the game,” he added, after India’s 17-year-old lead-off hitter, Shafali Verma, posted her second half-century of the game in response to the team to follow. “We see them putting in a strong performance there. We enjoy Shafali’s innings … her mindset is so clear.”

“Looking at the wicket, we thought we might play the final there,” he joked. “The ball is spinning a bit, so we’re wondering if we can move the final from here to Bristol. What do you think?”

However, Sridhar had no doubts that India would have its match faces when it comes time to kick off the WTC final.

“In terms of motivation, I don’t think you need to motivate someone who represents their country. And in a World Test Championship final I think there is no further and better motivation than that,” he said.

“We’ve all been very close because we’ve always been in the bubble for most of our time, so there’s a great camaraderie in this team,” he added. “So spending time with us is the easiest. The chat and the games they play is always on.”

Andrew Miller is the UK editor of ESPNcricinfo. @miller_cricket