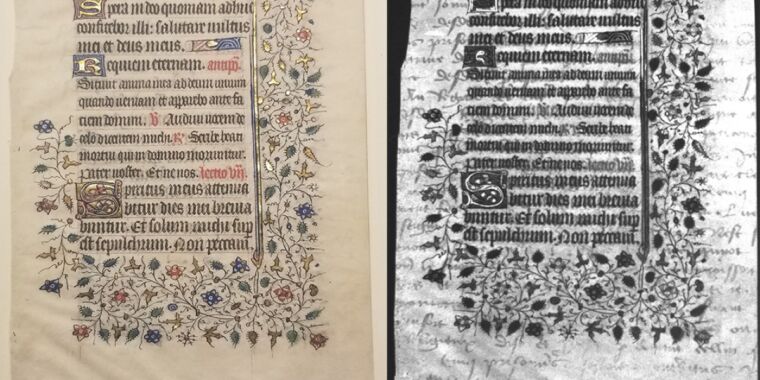 A student at the Rochester Institute of Technology used an imaging system developed as a freshman to discover lost text on the leaves of a 15th-century manuscript.

The pages of the 15th century medieval manuscripts were found to contain hidden text that only appeared under UV light. This discovery is the result of the efforts of a team of undergraduate students at the Rochester Institute of Technology. He built his own multispectral imaging system as part of a class project and was able to complete it despite the ongoing pandemic.

Revealing previously hidden text in ancient manuscripts is not unprecedented. In 2016, an international team of scientists unveiled the first few passages of Leviticus, developing a way to “virtually unfold” the heavily damaged ancient scrolls found on the west coast of the Dead Sea. Similarly, in 2019, German scientists combined state-of-the-art physics to effectively “deploy” the ancient Egyptian papyrus, which is part of the vast collection of the Egyptian Museum in Berlin. Reported. According to their analysis, the seemingly blank patch of papyrus actually contained letters written in what became “invisible ink” after being exposed to light for centuries.

And earlier this year, I reported on a new analysis using multispectral imaging. It is presumed that the four Dead Sea Scrolls fragments contained at the University of Manchester in the United Kingdom were blank readable text previously written in carbon-based ink, including some text and ruled lines. It shows that it is. .. In particular, one fragment showed the wreckage of four lines of text, about 15 characters long. I could only read the word Sabbath, but based on my analysis, Joan Taylor of King’s College London came up with a text related to Ezekiel 46: 1-3.

Therefore, RIT undergraduates are good companions. Their project started earlier this year. Nineteen students enrolled in a course known as the Innovative Freshman Experience offered by RIT’s Chester F. Carlson Imaging Science Center. The goal was to bring together students from different disciplines and combine their expertise to solve specific problems in this case and build a multispectral imaging system for analyzing historical documents.

Traditionally, students have announced completed projects at the annual Imagine RIT: Creativity and Innovation Festival in the spring. However, just as the device was nearing completion, the COVID-19 pandemic broke out in March, and the university, like all other educational institutions in the United States, closed its campus. To compensate for this, the students in the class are divided into four small groups, each with a different task. One group produced a technical manual for the imaging system, another group produced an end-user guide, a third group produced a research treatise, and a fourth group produced a video documentary about the project. The coronavirus will be happy to be announced at Imagine RIT next year.

RIT students use UV fluorescence imaging to find that the leaves of a 15th-century manuscript stored in RIT’s Cary Graphic Arts Collection are actually palimpsest, a parchment manuscript with multiple layers. I made it clear. The image on the left shows a document displayed in visible light, and the image on the right was created by a student-created imaging system.

Liz Stublen, a photographic science student, said in May that what we really valued if we couldn’t work directly on the system was to integrate more useful workplace skills into learning. is. Some people focused on programming and 3D modeling when they were building the system, but now they have been able to shift the focus of the entire class and develop their skills in that area. So this isn’t a great situation, but we were able to change it to maximize our benefits.

In particular, three students, Zoe LaLena, Lisa Enochs and Malcom Zalespent, completed the system in the summer. When classes resumed in the fall, we began investigating the leaves of 15th-century medieval manuscripts in RIT’s Cary Graphic Arts collection. Parchment leaves were obtained from historian and collector Otto Iggy about 10 years ago. Otto Iggy regularly edited such leaves from damaged or incomplete manuscripts. Of course, this collection has been studied by many scholars. However, this was the first time that everyone saw the leaves under UV light.

According to LaLena, when a student imaged one of such leaves, the page was actually a palimpsest, specifically with multiple layers of writing, and by imaging a “dark French cursive”. Became clear. During the 15th century, parchment was expensive and was often scraped clean and reused. But even after centuries, when you look at the page with the correct spectrum of light, there are still distinct chemical features. The next step is to use their imaging system to analyze 29 other known pages from Ege’s collection. This can also turn out to be palimpsest.

Stephen Galbraith, curator of the Cary Graphic Arts collection, said the students provided very important information about at least two manuscript leaves in the collection and, in a sense, discovered two texts we didn’t know about. It states. Now we need to understand what those texts are, and that is the power of spectral imaging in cultural institutions. To fully understand our own collection, we need to know the depth of the collection. Imaging science helps reveal it all to us.