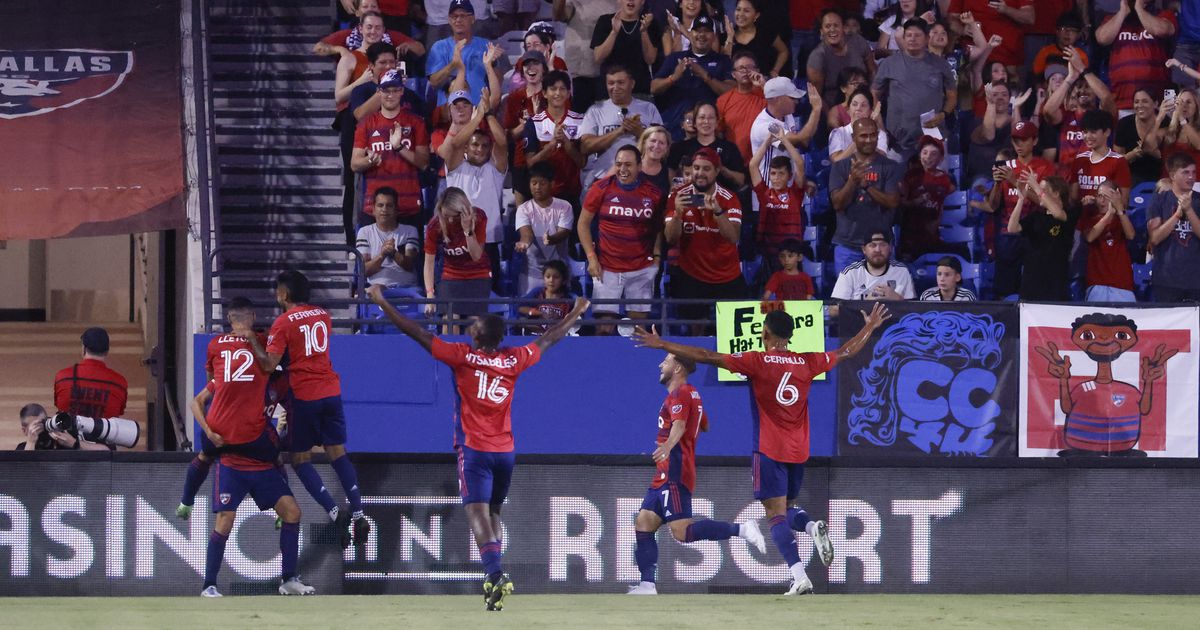 Frisco – This was exactly what it was supposed to look like. Paul Areola received a pass on the wing and passed to Jesus Ferreira. The striker tried to find the third player in the attacking trio of FC Dallas, Alan Velasco. When that pass was blocked, Ferreira got back to the ball and tucked it into the net to give FCD a 3-0 lead.

Everything went as planned for the FCD attack, and the defense kept their end of the bargain as FCD rolled to a 4-1 win over the San Jose Earthquakes on Saturday night at Toyota Stadium.

There were goals to consider for the FCD side, as Ferreira scored two goals as well as left-back Marco Farfan scoring his first-ever MLS goal, and Velasco added a stunning solo effort.

For most of the season, FCD found itself frustrated after the game, scoring early and perspiring late in the game as the opposing team tries – and sometimes succeeds – to overturn a single goal mark. With San Jose conceding several goals in their last five games on the road, the team maintained their energy after their third-minute opener in the third minute.

The goal was set up by Velasco, who dropped a ball that passed over his defender’s head and crossed to Ferreira to finish from close range.

“One of the things we talked about (before the match) was the health and determination inside the penalty area to score,” FCD coach Nico Estevez said after the match. “Today in the players’ minds we had to be ready to go. (Assistant coach) Peter (Lochen) told me that we were going to score goals because in the warm-up we scored almost all our shots. It wasn’t easy but we took advantage of the chances we had.”

Sebastien Leggett set up Farfan’s goal, which doubled the lead and took the pressure off the FCD’s attack. The new addition, which made his debut last weekend after arriving on a deal from New England, passed the ball to Farfan when the defender arrived in the area. With a touch and his shot hit COEX goalkeeper GT Marcinkowski, who was unable to save.

Confidence was understandably high after the second goal, with Velasco pulling a few tricks out of his bag in an attempt to prepare Lletget to score his first goal in the FCD, but the midfielder fired it high.

Velasco did not feature in the third goal, as Ferreira clocked his season total to 14, placing him third in the race for the scoring title.

But the Argentine rewarded his superb effort in the 57th minute, firing a shot from outside the area past the helpless Marchinkovsky, and set off to celebrate.

“We all always try to give our best for the team – sometimes it comes, other times it doesn’t,” Velasco said. “Today, fortunately, I got together and I am happy. We have to continue on this path.”

The only drawback on the perfect night in front of 15,015 fans was the FCD net in the second half. Earthquake striker Jeremy Ibobisi did his best to imitate Velasco’s superb goal, bending his shot from outside the 18-yard penalty area and beating FCD goalkeeper Martin Paes.

The win represented three crucial points for the FCD team after they emerged from a difficult road trip that saw the team take one point from two games against their conference rivals. The FCD consolidates its grip on third place in the Western Conference ahead of Wednesday’s visit from Philadelphia Union, which leads the Eastern Conference.

With the match postponed at the end of the first half, Estevez was able to give more rest than expected to some of his key players, allowing them to prepare for a quick turnaround. Ferreira and Letgit left after more than an hour of work, while Areola came out in the 75th minute, and central defender Jose Martinez enjoyed the last ten minutes and stoppage time from the bench. Ferreira and Areola did extra work this week, having featured in the MLS All-Star Game on Wednesday.

“Jesus and Paul are all-stars and played a lot of minutes, a lot of games. It was a chance to give them some rest, but once the Wednesday game starts, the players forget all that,” Estevez said. “From there, whoever looks best will have the opportunity to start.”

The game also hinted at FCD solving some of its final problems, with the attacking trio making good contact as he got down and ran and Lletget integrated well with the attackers in front of him with a pair of passes.

The club still has to do to continue this trend and it will not be easy to repeat against Al Ittihad. But on Saturday night, everything looked as it should.

The Dallas Morning News collaborates with The Striker Texas to bring coverage of FC Dallas and other prominent stories about Texas football to dallasnews.com. You can find more football coverage at thestrikertexas.com.