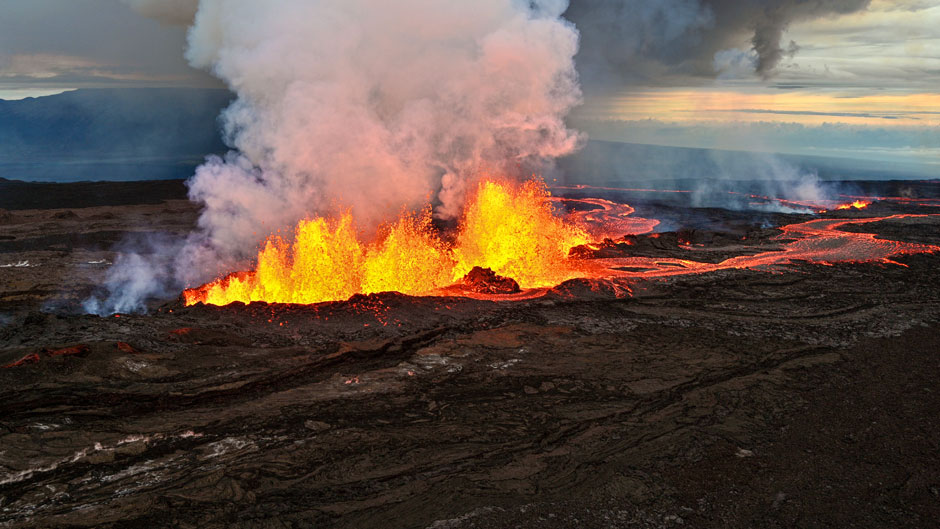 A year before the world’s largest active volcano erupted, research by two University of Miami Rosenstiel scientists revealed which of the two Mauna Loa rift zones would release magma.

The research, conducted by a University of Miami scientist and his graduate assistant, accurately predicted which of the two rift zones of Hawaii’s Mauna Loa volcano would erupt.

Mauna Loa, the world’s largest active volcano, began erupting on November 27 for the first time in nearly 40 years, spewing lava 100 feet to 200 feet into the air.

Using a satellite-based technique called Interferometric Synthetic Aperture Radar (InSAR) to measure surface displacement and estimate how much magma has accumulated under the volcano over a six-year period (2014-2020), the two researchers suggested last year that the magma movement would be upwards to the volcano’s summit and then north, making It leads to opening fissures in the northeastern rift region of Mauna Loa.

And that’s exactly what happened. said Falk Amelong, a professor of marine geosciences in the university’s Rosenstiel College of Marine, Atmospheric and Earth Sciences, who has lived on Oahu, part of the Hawaiian island chain, and has studied Mauna Loa extensively. “This represents years of hard work and extensive research bearing fruit and shows that accurate assessment of stress changes can be a powerful tool for informing predictions of future activity.”

Amelung and research assistant Bhuvan Varugu published their research in Scientific Reports, an open-access, peer-reviewed journal published by the Nature Portfolio. The study was funded by NASA’s Earth Sciences Division.

When Amelong learned of the eruption, “I was very worried that the dam would spread south because of the dangers of the pyroclastic flow. But as soon as it became clear that the dam had spread to the north, I was relieved to know that no one would be in harm’s way and that the many years of our hard work And our research has yielded accurate results.”

Late last week, lava flows from Mauna Loa’s eruption were heading toward a major highway. A December 1 update by the USGS confirmed that the pyroclastic flows “are heading north toward the Daniel K. Inoue Highway (Saddle Road) but have reached relatively flat ground and slowed significantly as expected.”

At the time Amelung and Varugu began studying Mauna Loa nearly seven years ago, it wasn’t easy to obtain data from synthetic aperture radar satellites, making it difficult for scientists to get a full picture of the volcano’s movements on the ground, according to Amelung.

To clear this hurdle, Amelung helped create the Geohazard Supersites and Natural Laboratory, an international partnership of NASA and five other space agencies that pool their satellite resources to make SAR data on geohazard sites more readily available to the scientific community. In the Mauna Loa study, the two researchers used data provided by the Italian Space Agency. “We can now perform complex geo-risk assessments of volcanic sites in just a few hours,” Amelong said. “It’s a great example of scientific progress.”

When Amelong lived on Oahu, he visited the Big Island of Hawaii every few months to study Mauna Loa, reaching its summit several times.

“It’s cool because it’s so big,” he said. “It is a natural laboratory for understanding the interactions of earthquakes and volcanoes. But it is important to remember that they are dangerous. This time, it seems, we were lucky in that the eruption did not cause much damage. An eruption in the south could reach populated areas in a matter of hours “.

Amelong and Farugo answered some questions to explain their research and the nature of volcanic eruptions in more detail.

Detail the exact nature of your Mauna Loa study and how it predicted the location of this latest eruption.

Farogo: When magma is feeding beneath a volcano, it often shows deformation of the earth at the surface. We extracted ground deformation on Mauna Loa from satellite imagery over a period of six years (2014-2020) and mathematically inverted it to infer the location, shape, and growth of the magma body. We studied the factors affecting magma growth as it reaches the shallow level under the volcano and when stress builds up due to magma pressure. In 2015, the magma accretion area moved south but there was no eruption, then it returned to its original location. Overall, from six years of magma pressure, we identified significant pressure build-up in the upper and northern part of the shallow magma body and identified them as future trends of magma growth. Recharging of magma has been going on since (2014 to 2022), and the current eruption occurred when magma moved first to the summit and then north, opening fissures in the volcano’s northeast rift zone. Therefore, our study helped to identify areas of stress accumulation that could be potential outbreak areas in the future.

What early signs, such as increased earthquake activity, indicated that Mauna Loa was about to erupt?

Amelong: In August and September, the number of shallow earthquakes as well as the inflation rate increase about three times.

Could we see a big earthquake caused by this explosion?

Amelong: Yes. Hawaiian volcanoes have horizontal faults at the tips under the wings that sometimes rupture in large earthquakes. This eruption began with the entry of a blade-like body of magma into the volcanic edifice known as the dike. This dike carried the crack under the eastern flank. However, the inflation of the last twenty years has mainly carried the error under the western side. Unfortunately, we don’t know at what threshold the bug will explode. A large earthquake of magnitude 6 or greater can occur at any time. But it may also require additional loading after it erupts by intrusion of fresh magma.

What’s so special about Mauna Loa?

Farogo: Mauna Loa is the largest subsurface volcano with a rich eruption history, about 33 times in the past 200 years. Its massive size is indicative of historic lava flows. Surprisingly, many of the volcanic eruptions on Mauna Loa have been preceded or followed by an earthquake. Therefore, there is a strong correlation between earthquakes and eruptions there.

Amelung: Every eruption is associated with a volcanic-tectonic earthquake, but these small earthquakes represent the fracturing of rocks in response to the rise of magma. They differ from tectonic earthquakes, which occur at tectonic faults. If there is a tectonic fault near an active volcano, it may be triggered. There are two possible triggering mechanisms. The first is the removal of magma from the magma reservoir which opens the fault. The second is the intrusion of magma into the volcanic edifice which can lead to rift loading. This second mechanism works on Mauna Loa.