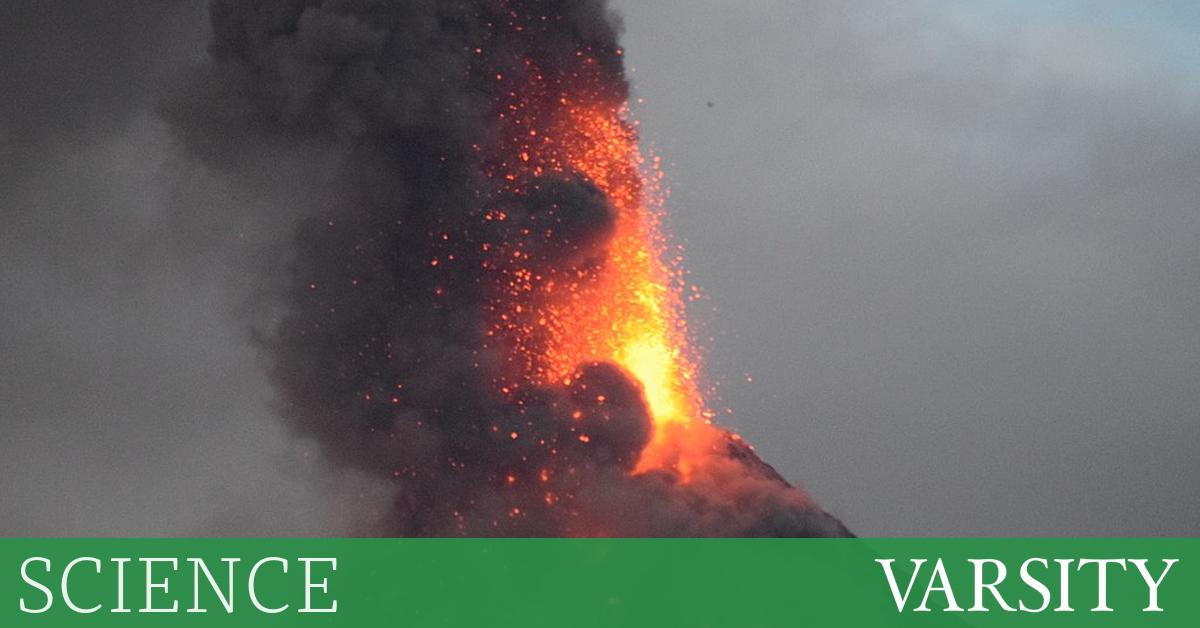 “Volcanic eruptions pose a threat to our dynamic planet that the human race has had to adapt to across societies and generations.” Darkimages08 / Wikimedia Commons

Volcanic eruptions pose a threat to our dynamic planet that humankind has had to adapt to across societies and generations. In fact, many settlements are now concentrated around volcanoes due to the opportunities they provide, including tourism, fertile soil for agriculture, and the potential for geothermal power generation. Therefore, forecasting when they will erupt, to enable proper evacuation, is vital to protect this population.

Fortunately, volcanoes are well studied and there are several warning signs that enable this prediction. One of the signs is the detection of shallow and low-volume earthquakes, which result from the rise of magma, which is semi-molten rock that rises because it is less dense than the surrounding solid rock. Exposure to obstacles on the way up creates pressure, which causes the rocks above it to crack. These earthquakes are early warning signs – the eruption of Mount St. Helens in May 1980, for example, predicted seismic activity from mid-March of that year. The level of activity might increase sharply immediately before an explosion, but, as with Mount St Helens, this is not always the case.

“Better monitoring and understanding means many lives can be saved.”

Magma chamber stress can be monitored to predict when the pressure will be released and thus when an eruption is likely. This process has been greatly improved in recent years by applying the Kalman filter to signals, which looks at temporal data and takes into account statistical noise to estimate future patterns, and thus when pressure is released, triggering an eruption. This method of analysis was applied with success, notably to study the 2008 Alaska eruption of Okmok volcano, although the stress signals, which included data such as Earth’s deformation, were particularly accurate. Okmok volcano was also a unique example because a magma chamber grew to accommodate the increase in pressure, which likely explains the lack of observed seismic precursors and why the Kalman filter was useful in taking a more elaborate approach.

In mid-October it was reported that Grimsvotn volcano in Iceland may erupt soon, another useful example, such as Okmok, highlighting why volcanoes need to be monitored individually, as each will have a unique tectonic and topographical circumstance. Glaciers cover Iceland widely, affecting the range of observation and the effects of eruptions. For example, the tremendous heat of an eruption of magma often causes glaciers to melt, and depressurizing the weight of ice often causes explosions. Moreover, the water can then mix with the resulting lava flow, other volcanic rocks and ash, to create a rapid flow called a lahar. However, this may not always be the case if the ice does not thaw quickly. In Iceland, and many other glacial sites, structures called tuyas can form where the lava erupts in the form of a flat “table top”. Understanding different structures helps scientists predict the nature of products and the spatial extent they will cover.

It can be said that the most dangerous products of a volcanic eruption are the volcanic flows generated from the collapse of the convective column of the ash cloud.

The gas release serves as a warning sign and effect of volcanic eruptions. Their release could indicate an eruption that will soon follow. However, gas contents must be watched closely because many active volcanoes steadily release gases even when they are not close to an eruption. Changes in the formation could be an indication of an impending outbreak. For example, just two weeks before the eruption of Mount Pinatubo in the Philippines in June 1991, the sulfur dioxide content in the off-gases increased nearly tenfold. Total emissions of sulfur dioxide caused a decrease in global temperatures of 0.6 ° C due to the formation of aerosol particles, which reflect the incoming solar radiation, indicating the very wide-ranging effects that the eruptions can have. This includes ash distribution disrupting air travel, including, perhaps most notably in recent years, during the 2010 eruption of Eyjafjallajokull volcano in Iceland, which resulted in the cancellation of more than 100,000 flights.

On a more local scale, arguably the most dangerous products of eruption are pyroclastic flows, resulting from the collapse of the convective column of the ash cloud. These are mostly made of rock, ash, and gas, the temperature is hundreds of degrees, and they destroy everything in their path when moving at speeds of hundreds of miles per hour. Smaller pyroclastic flows may result from collapse of lava flows. While precipitation from tephra, crumbling rocks, is definitely dangerous in the beginning, this distributes various minerals that contain nutrients, which can be exposed to weathering and incorporate them into fertile soils. Once the area recovers from the eruption event, this fertility offers significant agricultural opportunities for the communities around the volcano.

Geological hazard maps can be produced based on studies of the spatial effects of past volcanic eruptions. These are especially useful for advising less technologically advanced societies by highlighting key areas of risk. However, these are subject to changes over time and the effects of individual eruptions may vary greatly depending on the strength and quantity of the products.

In general, the use of monitoring and prediction techniques such as those discussed in this article should be increased throughout the world as societies develop and acquire suitable techniques, such as those for obtaining data on magma chamber stress to be passed through a Kalman filter. Although physical settlements are only able to survive the effects of the explosions to a certain extent, improved observation and understanding will mean that many lives can be saved, enabling further human coexistence alongside the irrepressible forces of nature.

So we depend almost completely on advertising for funding, and during this unprecedented global crisis, we expect a few difficult months and years to come.

Despite this position, we’ll be looking at innovative ways to look at serving our readers with digital content and of course, in print as well.

We are therefore asking our readers, if they so wish, to donate no more than £ 1 to help with our operating costs at least until this global crisis is over and things start to return to normal.

Thank you very much, all here at Varsity would like to wish you, your friends, families and your loved ones a safe and healthy few months.

NHS leaders warn against Christmas mess. How careful should UK public plans be?