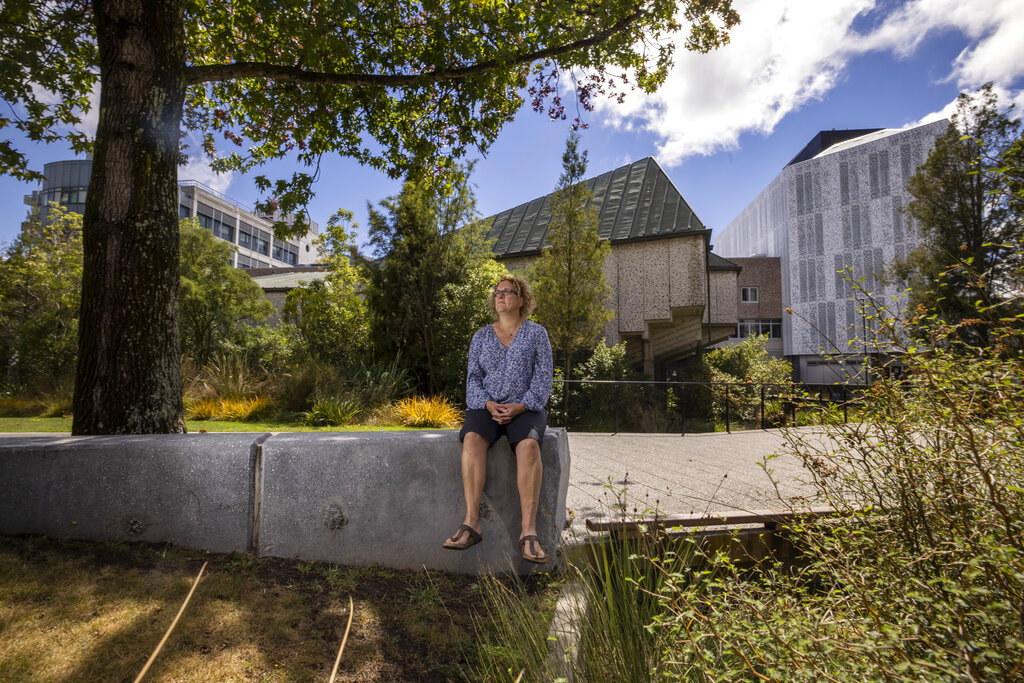 Anne Brewer, the only survivor of a bus that collapsed from a building debris during the Christchurch earthquake 10 years ago, sits at her workplace in Christchurch, New Zealand, Wednesday, February 10, 2021. A woman used her anger to ensure the buildings were safe. Others found peace after the tragic losses. Ten years after the earthquake in Christchurch killed 185 people and devastated the city, some of those severely affected are taking part in their travels. (AP Photo / Peter Meecham)

Not the story of my life

Ann Brewer was taking a bus from the coastal suburb of Sumner to the city center when the magnitude 6.3 earthquake struck. Bricks were strewn with the facade of the building collapsing, smashing the bus roof and killing all 12 people on board, as well as four other people in the vicinity. Brower was in excruciating pain, pinned under the collapsed roof. The pressure continued to build until her pelvis broke off and she lost consciousness.

Originally from North Carolina, Brewer, an assistant professor of environmental science, was shaken years before the 1994 Los Angeles earthquake when she was living in Claremont, California. In Christchurch, she woke up on the bus, aware that she was trapped and alone.

I thought this situation was unacceptable. “This is not the story of my life,” she said. “So I did what any reasonable person would do, and yelled at the top of my voice.”

A man appeared with bright blue eyes. Others came, dug through the rubble, pulled the roof with their bare hands, talked to her about hunting, asked her about her hopes and dreams, and anything that took her mind away from what was happening.

Strangers took her in the back of a truck to the hospital, where she would stay for two months. After the surgeries and rehab, I was finally able to walk again without crutches.

Brauer sometimes wonders why she was so alive when everyone around her died. The Dalai Lama’s visit to her and six other survivors four months after the earthquake helped set the record straight.

Brewer remembers the Dalai Lama saying: “You have something to offer.” “All you need is to let go of what he should have been doing, and figure out what that thing is.”

In Brower’s case, part of the answer lies in making buildings safer. She was furious to learn that the city council had searched the building after an earlier earthquake five months earlier and found the façade unsafe, but had not implemented a repair.

“Anger can be constructive,” Brewer said. “When Parliament started thinking about changing the building code, I said, ‘Okay. OK. This is something I can participate in. I have a few things to say about this. “

Brower is also still concerned after touring the US that cities from Seattle to Charleston, South Carolina, are facing similar problems with their old buildings, which could personalize cities but also be a danger.

In New Zealand, Brower wanted old buildings to be covered by building codes and for regulators to prioritize repairing those parts that would fall first in an earthquake, such as parapets and unreinforced construction. But she encountered resistance. She wrote opinion pieces and gave radio and TV interviews but it looks like lawmakers will not budge.

I finally got a five-minute meeting with the minister in charge at the time, Nick Smith, and he ended up agreeing that a higher priority is needed for insecure interfaces. In what lawmakers called the “Brower Amendment,” New Zealand cut half the time landlords had to repair dangerous buildings. Smith described Brower as a true New Zealand hero.

“I didn’t get everything I wanted, but I got close,” Brewer said. “And you should celebrate that.”

After the earthquake, Prue Taylor wasn’t unnecessarily worried at first when she didn’t hear from her husband, Brian. She knew he was having a lunchtime meeting in town and loved to stay and chat. I thought he would be busy helping people after the earthquake.

But it turns out that Brian immediately left the meeting that day to bid farewell to a group of Japanese students at the CTV building where he was working as director of King’s Education School of English. The building collapsed and 115 people were killed, including Brian.

When Prue Taylor arrived at the building, it was a surreal sight, a huge pile of rubble as the smoke rose and the elevator shaft still standing. She stayed there with her son Hamish for hours while the rescuers were searching for survivors.

“It was difficult to leave the place, not finding him or knowing if he was alive or dead or anything related to it,” Taylor said.

Brian and Bro met as college students and have been married for over 40 years. Bru was the principal at Christchurch Girls’ High School but she’s been talking to Brian about retiring and traveling more.

“I still think, what would Brian have done if I had died?” Taylor said. “And I think we would have felt the same way, and that there are things that we can do with our communities. In my case, my school community.”

Taylor is still furious about building the CTV Building, after an investigation found that its design was fundamentally flawed and never had to be approved.

“Cheap and shoddy is really the way it is described,” she says.

She unexpectedly lost her grandson a year after the earthquake caused additional grief to the family.

She said, “You just start to think,” This is life. ” “It made me more aware of what people are going through in their lives, and the tragedies people endure.”

She says the sense of collective grief in Christchurch after the earthquake helped her get over it. She says people are becoming kinder and friendlier to each other, they salute neighbors they have never met before, bring bread, and sympathize with those who have lost it.

The long journey of grief

Jonathan Manning was awake near the collapsed CTV building with his two children Kent, who was 15 at the time, and Liz, 18, when a police officer told them she had terrible news.

Until then, the kids had been hoping that Donna Manning was somehow alive: “My mom is a superwoman,” Liz told a reporter moments earlier. But the officer told them there was no longer any hope of finding survivors.

Jonathan Manning said, “This is the moment he really sank for the three of us.” “The kids split up. I did, too.”

Jonathan and Donna, the presenter and TV producer, had split nine years ago. Jonathan now felt a responsibility to help guide his children through their grief. He wished he could protect them from him, but he knew he could not.

He rented a place so they could all live together, which is something Liz initially opposed but eventually accepted. He said the next two years were tough, as Kent finished high school and Liz ventured into a paid job.

“They fought so much in the fog, in malaise,” said Manning. “Then, slowly, over time, things started to move forward and improve. Grief is a very personal journey, a long journey, and recovery takes time.”

Manning, who works with Wills in the Salvation Army, said he is extremely proud of the adults who became his children. Liz now lives in Western Australia, and is studying to become a counselor and engaged to marry. Kent is a trained carpenter in Christchurch and he just bought his first home with his partner.

Manning says he is grateful to his family and friends, the Donna brothers, who have helped them since the earthquake, and people from all over the world who have contributed to a trust fund that helped children start their adult lives.

Manning said, “I think their grief never leaves them, but their lives grow around him.” “They still miss their mom.”

He believes his children have become more sympathetic since the tragedy. He says every anniversary stirs emotions, but these days they all feel more at peace.

“America is back,” US Secretary of State Antony Blinken told BBC News