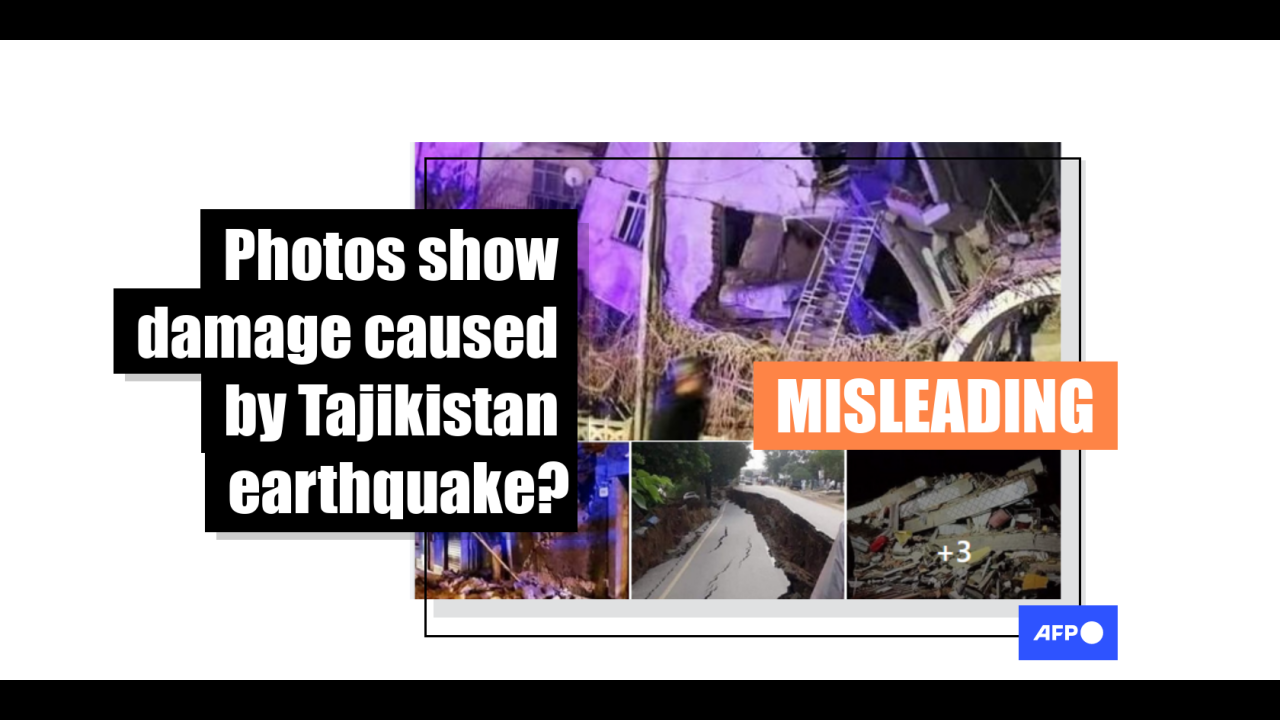 Several Facebook and Instagram posts have published six photos along with claiming to show the devastation caused by an earthquake in Tajikistan in February 2021. This claim is misleading: Four photos have appeared in reports of earthquakes that struck Turkey, Italy and Pakistan before. Until February 2021. Only two photos have been shared in the publications in reports on the effects of the earthquake in Tajikistan felt by India.

The six photos were posted to Facebook here on February 14, 2021.

The caption in Indonesian reads in part: “Tajikistan

A 6.4-magnitude earthquake jolted Azad, Kashmir, on Friday evening at 22:02. The epicenter was located in Tajikistan at a depth of 80 km.

No casualties were reported so far. The earthquake was felt strongly in northern India, in Jammu and Kashmir, Punjab, Haryana, Himachal Pradesh, Delhi – NCR and Uttarakhand. According to the Indian Meteorological Department (IMD), the epicenter is located in Tajikistan. IMD said the quake had a magnitude of 6.3. It took place at 22:30 West Indonesia Time. “

A 6.3-magnitude earthquake struck the central Asian country of Tajikistan on February 12, 2021. The earthquake was felt across the region, including northern India, according to Hindustan Times and Hinduism.

The images have also appeared in other Facebook posts with a similar claim, for example, here, here, and here.

Photos were also shared with a similar claim in English, including here, here, on Facebook, and here, and here on Instagram.

However, the claim is misleading.

Reverse image searches found that four of the images had been shared in media reports about the effects of earthquakes in Turkey, Italy and Pakistan in the past three years.

The first image appeared in this report in French, which was published by the Turkish state-run Anadolu Agency on January 24, 2020.

In the English translation, the headline of the report read: “Turkey / earthquake in Elazig: 35 aftershocks recorded.”

The first paragraph of the report states: “A 6.8 magnitude earthquake occurred on Friday evening in Elazig region, southeastern Turkey.”

A 6.8 magnitude earthquake jolted eastern Turkey on January 24, 2020, killing at least 29 people and injuring nearly 1,500, according to what AFP reported here and here.

Here is a comparison between the first photo in the misleading post (L) and the Anadolu Agency photo (R):

The second image appeared on December 27, 2018, report of an earthquake in Sicily, Italy, caused by the volcano of Mount Etna. The photo, which was attributed to the Australian Associated Press, contains a caption: “A damaged house in Fleury, Sicily, Italy.”

A number of people were injured and buildings damaged after a 4.8-magnitude earthquake near Italy’s Mount Etna on December 26, 2018, days after the volcano erupted, AFP reported here.

Here’s a screenshot comparison between the second image in the misleading post (L) and the photo of the Australian Associated Press (R):

The caption on the photo reads: “Turkish officials and police are working at the site of a building collapse after a 6.8 magnitude earthquake in Elazig, eastern Turkey, on January 24, 2020. A strong 6.8 magnitude earthquake struck eastern Turkey, killing at least four people. People, causing The buildings collapsed and the panicked residents took to the street. Rescue teams were dispatched to the site of the earthquake, whose epicenter was in the small town of Sivres located on the banks of the lake in the eastern province of Elazig.

Here is a screenshot comparison between the third image in the misleading post (L) and the AFP (R) image:

The fourth photo showing a major crack on a road was published by Pakistani media Geo News in this report on September 24, 2019. Its title is: “The images and videos show the devastation caused by the earthquake in northern Pakistan, AJK.”

The first paragraph of the report states: “A 5.8-magnitude earthquake in northern Pakistan and Mirpur in Azad Jammu and Kashmir on Tuesday resulted in dozens of injuries and damage to city infrastructure, especially roads.”

Agence France-Presse reported that the earthquake killed at least 19 people and injured hundreds of others.

Here is a screenshot comparison between the fourth image in the misleading post (L) and the Geo News (R) image:

The fifth and sixth pictures

The remaining two images appeared in Indian media reports of how the February 12, 2021 earthquake was felt in Tajikistan, in northern India. One of the photos shows people walking out of their homes in Delhi, while the other was taken in Srinagar, according to local media reports.