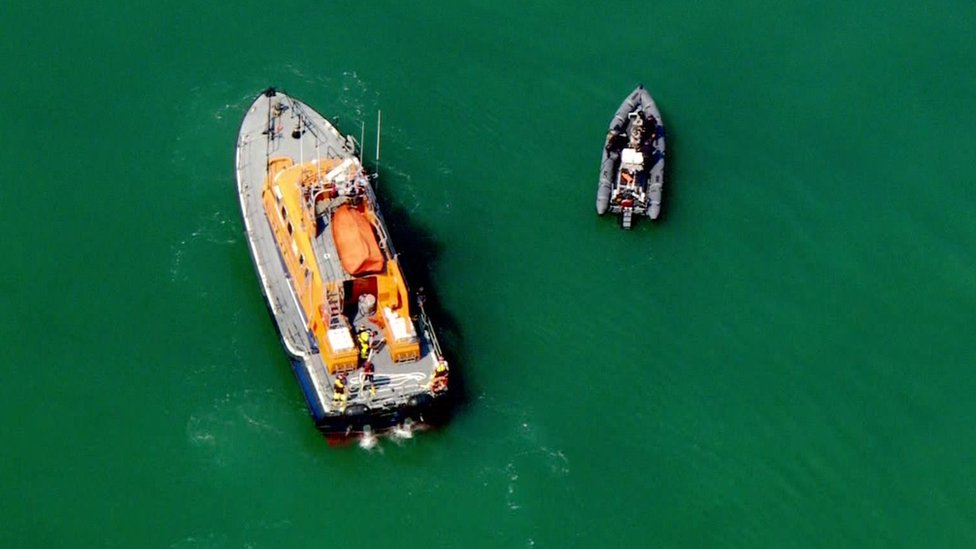 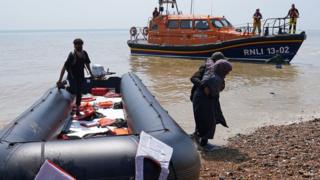 The government has announced an agreement with France in an effort to ban migrants traveling to the UK by small boat.

Many migrants try to cross the English Channel – the stretch of water between England and France – by small boats or dinghies.

As part of the deal, France has said it will double the number of police patrolling its beaches, where many migrants leave.

Migrants have different reasons to try to come to the UK – some are asylum seekers who have fled war or persecution in their home country. Others are coming to the UK illegally in the hope of finding more opportunities.

Many come from places like Syria, Afghanistan and Iraq where many homes have been destroyed and people have become homeless due to the fighting. 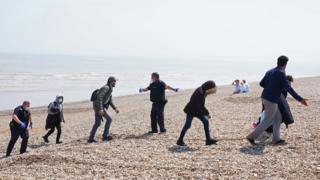 A group of people, thought to be migrants, are escorted by the Border Patrol to Dungeness on Tuesday

How many migrants travel to the UK this way?

On Monday, July 19, at least 430 migrants crossed the Channel, including children. This is the highest figure ever for a single day.

The previous census was in September 2020, when 416 migrants are believed to have passed.

Already the total number of migrants crossing the English Channel this year has exceeded the 2020 figure, which was 8,461.

However, in 2019, a total of around 45,000 people sought asylum in the UK. So those that come with dinghies and small boats are only a fraction of the total. 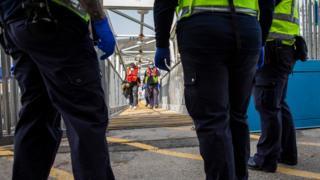 Why are so many choosing this route at the moment?

This route is often used by migrants who have arrived in mainland Europe but want to travel to the UK and reach the port of Dover in Kent, south-east England or other places along the coast like Dungeness, also in Kent.

The numbers vary with the seasons. The numbers are usually higher in the summer months as the weather is better and the seas are calmer, which means that travel seems safer. Boating can also be seen by migrants as less dangerous than other options, such as hiding in trucks, containers or trains.

But crossing seas into things like dinghies or small boats is very dangerous. Also, most migrants have to pay large sums of money to criminal gangs to make the trip through the canal.

The water that these migrants are trying to cross is one of the busiest transport lanes in the world, which means that they are very large boats traveling in the area, while the boats that people are traveling on are often very small and unsafe and the water is very cold 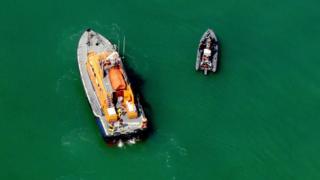 What happens when they get here?

Many migrants crossing the English Channel seek asylum as soon as they arrive in the UK. Asylum seekers hope to obtain refugee status, which means they can stay in the UK.

They have to prove that they cannot return to their country of birth because they fear persecution because of things like their race, religion or political opinion.

Decisions are made by a case officer, who works for the government. They look at things like the country of origin of the asylum seeker, or evidence of discrimination.

This is supposed to be done within six months, although many asylum seekers wait longer for a decision. 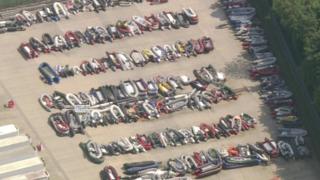 There are dozens of small boats in storage in Dover

Why do people see it as a problem?

As well as the risk that migrants are trying to cross such a busy portion of water on small unsafe boats, the government wants to maintain control over who is entering the country and it is more difficult when people enter this way.

MPs are currently seeking to change the laws on migration and asylum seekers, hoping to distract people from trying to enter the UK this way.

The Secretary of the Interior, Priti Patel MP, hopes the new plans to work with France will stop the passage of people. She says the new funding from the UK will help French officials “respond by posting more security forces further along the coast, installing and using the latest surveillance equipment across northern France”.

Some French politicians have said that the French coast is too long to fully protect it; “We have many miles of shore to monitor,” explained French MP Pierre-Henri Dumont.

A recent poll found that most Britons support tougher measures against people entering the country illegally. The YouGov poll – which asked nearly 2,000 adults what they thought about migration issues – found that 61% believed that a migrant coming to the UK from a ‘safe country’ (for example France) should not be allowed to stay in the UK as an asylum seeker.

However, the UK’s plans to stop people from entering the country have been criticized by charities including Refugee Action, which has called them “extreme and bad”. Charities worry that people in need of help from the UK may not be able to get it if the country’s rules become stricter.

Russia in all but the name: the ROC team goes to Tokyo with a siege mentality | Russia Olympic Team