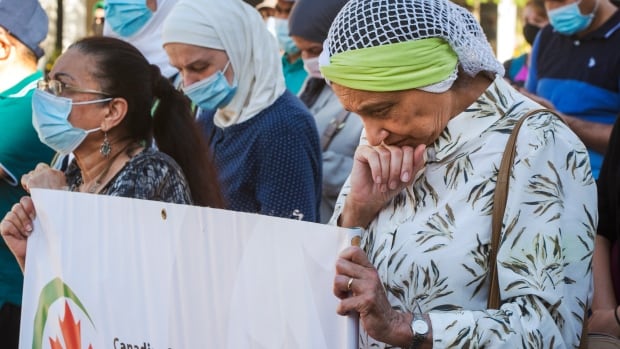 The head of a group representing the Muslim people in Quebec says many members hope there will be a plan for concrete action coming from Thursday’s national summit on Islamophobia and that some specific issues related to the province will be addressed.

Yusuf Faqiri, director of Quebec affairs for the National Council of Canadian Muslims (NCCM), said the province’s ban on religious symbols for many government employees is a major concern for Quebec Muslims entering the summit.

“It is high time the government worked on this,” Faqiri said, explaining that the federal government should intervene and take a stand on the law. “This is the most important issue, many would argue.”

Faqir called Bill 21, or the law of secularism, “legalized discrimination.”

He added that what he hopes to get from the summit is a “genuine and sincere partnership with all levels of government”, in which officials “support denunciation with political action”.

The summit is largely in response to an attack on London, Ont. last month. A 20-year-old drove his car to the Afzaal family, killing a teenage mother, father, grandmother and daughter while they were out for their evening stroll.

A nine-year-old boy, Fayez, was the only survivor.

Leading up to the summit, the NCCM issued dozens of policy recommendations drafted after consulting with thousands of Canadian Muslims who would like to be seen implemented through the meeting.

Faqir teamed up with Mohamed Labidi, co-founder and former president of the Quebec City Mosque, to make the announcement in Quebec City on Monday.

Labidi said Islamophobic actions are escalating and becoming more frequent, and Muslim people are “in his best interest” when it comes to confronting hatred in Canada.

“We are the best position to give the government solutions to fight Islamophobia and hatred in general,” Labidi said.

Faqiri said it was symbolically important to announce the NCCM recommendations in Quebec City, where six men were killed and dozens more injured when a shooter opened fire after the evening prayer on January 29, 2017.

“It was important for us to be in Quebec City because we need to know that this issue is not just for Quebec Muslims, but it is for Quebecers across the province,” he said. “We needed to be there to show that we support the local community, but it is also important to be there in the place where one of the worst Islamophobic attacks took place.”

Faqiri said it is up to all levels of government to take concrete measures to stop Islamophobia and the NCCM recommendations are addressed to federal, provincial and municipal officials.

“The time is now, more than ever,” he said, adding that there are still elected officials in Quebec who deny that systemic racism is a problem in the province. “What needs to happen now is the work that needs to happen.”

Some of the recommendations include a special envoy for Islamophobia, changes in education policy and curricula, and the reform of the Canada Revenue Agency.

Two of the recommendations relate to Quebe’s controversial law of secularism.

One asks the federal Attorney General to intervene “in all future cases challenging Bill 21 before the courts.”

Another calls for the creation of “a fund to help those affected by Bill 21 have a degree of financial security until legislation is struck”.

Faqiri said the attacks in London, Ont., And Quebec City, and countless others, have shown the need for significant change.

“The time has come for denunciation, now is the time for a real action to happen, because it is a life and death situation in Canada,” Faqiri said.

Nina Karachi-Khaled, chair of the national board of the Canadian Council of Muslim Women, also highlighted Bill 21 as a major concern for members of her organization.

She said the law disproportionately affects minorities, many of whom are already afraid of being victims of violence and harassment in their daily lives.

“Many of our members are feeling scared to go out for a walk, to do homework,” she said.

She said there would be summit attendance in the form of check-in and report cards and that her organization would do everything it could to help the government fight Islamophobia.

“This is not just an issue for the Muslim community, it is an issue we all need to work on together,” Faqiri said.