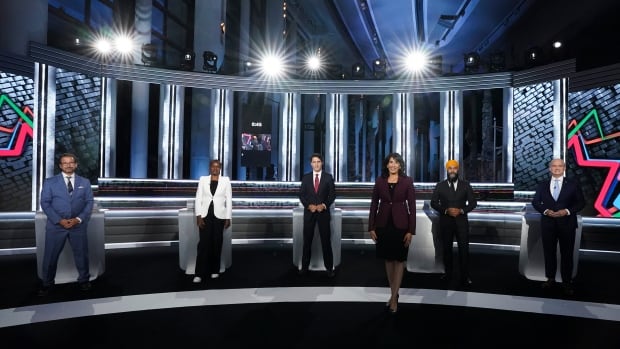 The debate began with a heated exchange between Qubcois Bloc Leader Yves-Franois Blanchet and debate moderator Shachi Kurlover Bill 21 which barred some civil servants, including teachers, police officers and government lawyers, from wearing religious symbols at work and the Bill 96 , which would make French the only language needed to work in the province.

“You denied that Quebec has problems with racism, yet you advocate legislation such as Draft Laws 96 and 21 that marginalize religious minorities, Anglophones and Allophones. Quebec is known as a separate society, but for those outside the province, please help them understand why “Your party also supports these discriminatory laws,” Kurl asked.

“The question seems to imply the answer you want,” Blanchet replied. “Those laws are not about discrimination. They are about Quebec values.”

Kurl, president of the Angus Reid Institute, asked Blanchet more than once why he supports what she called “discriminatory laws.”

“You can repeat as many times as you want that they are discriminatory laws,” Blanchet said. “We are saying that they are legitimate laws that apply in the territory of Quebec and there seem to be people here who share this view.”

Speaking during a campaign stop in Hamilton today, Trudeau said he was surprised by the question.

“My position on this is known, not in favor of that particular law. But it is wrong to suggest that Quebecers are racist,” he said.

“As a Quebecer, I saw that question as really offensive. I think, yes, there is a lot of work to be done to continue to fight systemic racism across the country and in every part of this country. But I do not think that this question was acceptable or appropriate … I had a hard time processing it [it] even last night ”.

When asked why he did not withdraw during the debate, Trudeau said he did not think it was appropriate to terminate the moderator.

Conservative leader Erin O’Toolesaid he also found some of the questions during the debate, organized by the Leadership Debate Commission and produced by a media coalition, “a little unfair”.

“Quebecers are not racists and it is unfair to make a comprehensive categorization. They have taken decisions and laws passed by their national assembly,” he said from Missisauga, Ont.

“We have to make sure we work together and respect each other. That’s why I said I would never challenge a law passed by the Quebec National Assembly, Queen’s Park or here in Toronto or by any provincial assembly. . “

O’Toolead said he would never introduce a bill like Bill 21 federally.

At a special news conference in Ottawa, NDP leader Jagmeet Singh said it is a mistake to think that systemic racism is isolated in a province or territory.

“It undermines the fight against those forms of discrimination. We have to accept that this exists everywhere in the country. One of the biggest examples is that indigenous communities do not have clean drinking water. This is a terrible example of how serious it is.” it’s systemic racism, it’s discrimination, “he said.

“We have to be very clear, this is not a problem of any province or territory. It exists everywhere in Canada. And to address it, we have to accept that it is everywhere and work together to eradicate it.”

“There is a perception that systemic racism does not exist in Quebec. But in fact, it exists throughout Canada,” she said during a campaign stop in Ottawa.

“With regard to Bill 21, I have always been clear in saying that I believe it is discriminatory legislation. This is a law that is a violation of fundamental rights and freedom of expression, as well as freedom of religion, and it is not because yes “I say I do not like Quebec. My husband and I have quarrels from time to time. We have been together for 30 years, but we have quarrels and when he makes mistakes, I say so. But I tell him with respect and friendship.”

Quebec Prime Minister Franois Legault went on the offensive at a scheduled news conference Friday, addressing what he called an “attack” on two “perfectly legal” bills.

“To claim that the protection of the French language is discriminatory or racist is ridiculous,” Legault said.

“I will certainly not apologize for defending our language, our values, our powers. It’s my duty as Prime Minister of Quebec.”

“Someone who is supposed to be a judge decided to be part of certain teams, saying those laws are discriminatory,” he said. “It’s unacceptable.”

The prime minister apologized to the debate commission, which said on Friday it was not writing the questions.

Earlier this year, a court in Quebec found that Bill 21 violates the fundamental rights of religious minorities in the province, but those violations are permissible because of the clause despite the Constitution.

Justice Marc-Andr Blanchard also ruled that the most controversial parts of the law banning religious symbols for many government employees could not be enforced in English schools.

The main results from the leaders’ debate

CBCs chief political correspondent Rosemary Barton discusses key exchanges during the leaders’ only English-language debate and why they are unlikely to lead to a major change of momentum, except perhaps in Quebec. 2:15

Lenovo blames the “firmware” issue for blank-screen smart displays and says Google is working on a fix six months after the complaint began.

Renaming US 27 for Trump a straightforward process, if Florida lawmakers agree