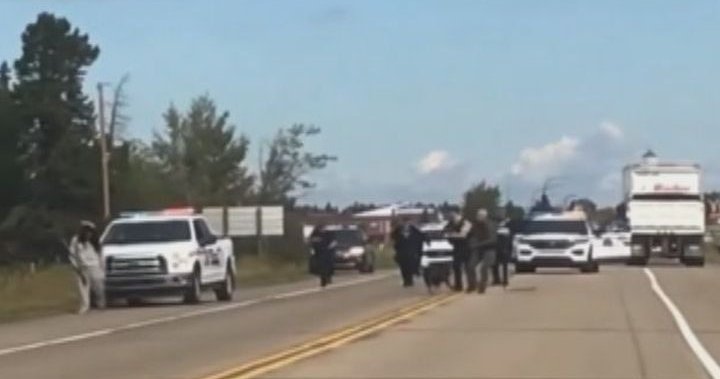 WARNING: This story contains a link to a video containing graphic content.

The RCMP in Alberta used one of their vehicles to knock down a man they believed was carrying a firearm on a highway south of Edmonton on Friday before arresting him.

Two people, one who saw the man before he was hit and one who saw him later, told Global News that he is a Native American.

The incident began to unfold around 11:45 a.m. when members of the Wetaskiwin RCMP detachment were called for someone carrying a firearm while walking south on Highway 2A, police said in a press release issued Friday evening.

“The Wetaskiwin RCMP, with the help of the RCMP Police Dog Services, responded to the area and quickly found a lone male walking with a firearm,” the RCMP said. “Since the suspect was not following the verbal commands of the police to remove the firearm, for public and police safety, a police car was used to disarm the man.

“A 35-year-old man was later arrested. Officers on site provided medical assistance, and the man was then transported to an area hospital via ground ambulance with life-threatening injuries. No officers were injured as a result of this incident. “

Police said the incident will be reviewed through an “RCMP internal review process” and not by the Alberta Serious Incident Response Team.

“This incident was reported to the director of law enforcement in Alberta and was deemed inappropriate; however, although designated to be in the field, ASIRT will not conduct an investigation, “the RCMP said.

A video of the arrest was posted on social media and shows the RCMP vehicle hitting the man twice from behind. After the man is hit for the first time, someone can be heard shouting, “drop the gun!” The man then continues to walk before being hit again before police officers and a police dog rush towards the man to take him into custody.

Maskwacis’ Peter Desjarlais told Global News he passed the man on the street and told him “it looked like it was a rifle” he was carrying. When he stopped at a nearby business, he asked some people there what was going on and said he was told the police were responding to a man with a gun, but that it was not a real gun.

Desjarlais said people told him the man was walking on the highway because his trip left him. He said he was shocked when he later saw the video of how the man was arrested.

“There was no need for that,” he said. “The weapon was not real. There were other ways they could have handled it. They had a dog … to knock it down. “

At a news conference Friday night, Chief Inspector Darcy Fleury, the RCMP officer in charge at Central Alberta Center, told reporters he could not comment on allegations made by community members that the man did not carry a real weapon.

“I do not like to see what I saw today,” he said. “I have seen him many times where our people are being mistreated.

“I want to see justice.”

Asked how the RCMP would respond to members of the local community who are upset about the way police handled the situation, Fleury said the RCMP would explain to community members why officers thought they should take action. .

“This incident, indeed, is the person with the firearm,” he said. “We will communicate with the community.

“This person was still walking and definitely had a purpose for the community …. So I think the message is that RCMP is there for the safety of the public.”

Luci Johnson is a court employee from the area and said she passed by the man after his meeting with police.

“We did not understand its severity,” she said. “We knew something was happening, but we did not think it was as dramatic as we had seen.

“We are human beings. How can we not have compassion for such a thing?

Johnson said the husband had children and she fears how this incident will affect them.

“We know RCMP has a job to do, but that was not part of their job,” she said. “If they are going to use the dog in that capacity that should be enough.

“We see some of the incidents that have happened here and they just shake their heads.”

Johnson described her reaction when she saw the removal video after it happened.

“The first time (the vehicle hit the man) was shocking, but the second was unbearable,” she said. “It was depressing to see.”

Johnson said she believes the RCMP relationship with the community needs improvement and that “they need to take a step back and look at our community”.

“There have been historical traumas,” she said, adding that while the RCMP’s role is to protect society, it sometimes feels that the police “are coming and hurting us.”

“It was too much for them to do to members of our community … how do we sit down and recover from something like that? … What will the RCMP do about it?”

As of 7:30 p.m., police said a RCMP collision reconstructor remained at the scene while an investigation into what happened is ongoing.

Police said traffic south on Highway 2A, about 1.5 km south of Wetaskiwin, was still being diverted and this was expected to stay that way for several hours.