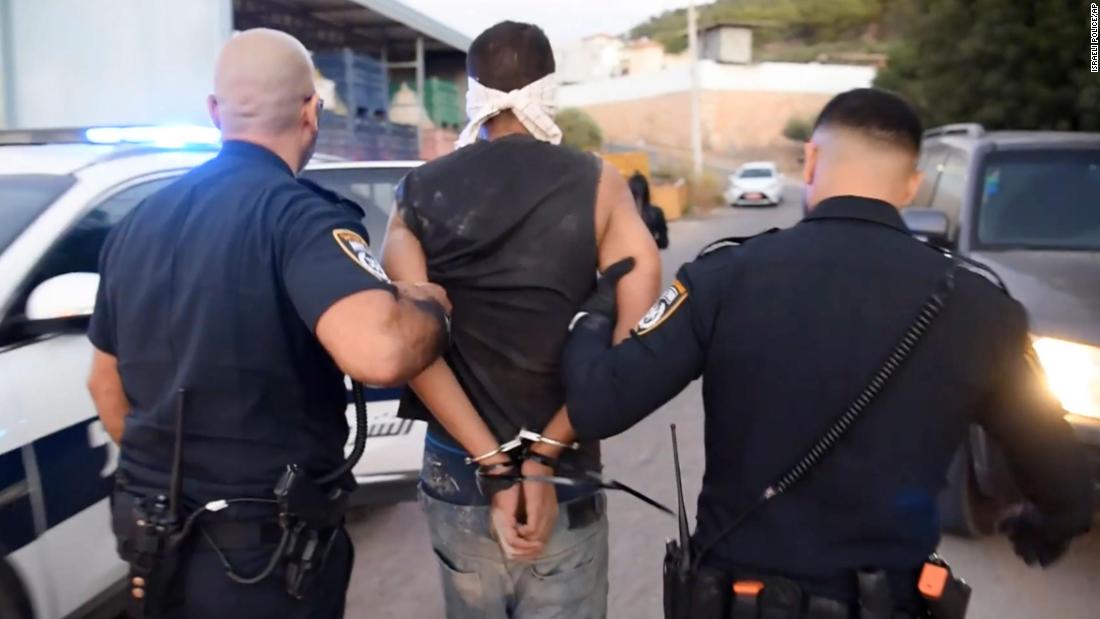 The first two were arrested Friday night in Nazareth, about 30 kilometers (18 miles) from the Gilboa prison where the blast took place, while two other fugitives were caught in the early hours of Saturday in the village of Umm Al-Ghanam, about 25 kilometers (15 miles) from the prison.

A police statement Saturday said Zakaria Zubeidi and Mohammed Al-Ardda were found in a truck parking lot after an operation involving soldiers, police and intelligence officers.

The video released by police showed the two men – blindfolded and handcuffed – walking towards police vehicles after their arrest.

Israeli media have also reported that prison watchtowers were left unmanned, or guards were asleep as the blast occurred. Authorities have not confirmed these reports.

It also appeared in the Israeli media that the prison projects, showing the crossings, had been uploaded online by the building’s architects, although it is not known if the inmates took advantage of the information in their escape.

Five of the men are members of the militant group Islamic Jihad. Mohammed Al-Ardda and Mahmoud Al-Ardda are brothers. Zubeidi is a former commander of the armed wing of the largest Palestinian faction, Fatah.

The escape has prompted security measures in Israeli prisons, including the movement of prisoners to other facilities, according to a spokesman for the Israeli Prison Service, who said Palestinian prisoners had protested and set fire to their cells. protest.

In a development certainly predicted in response to the retrieval of men, a rocket was fired from Gaza into Israel on Friday evening. The launch was intercepted by the Israel Iron Cup air defense system, the military said, and there were no reports of any damage.

In a retaliatory attack, the Israeli military said it had attacked a Hamas machine gun post, storage site and military complex in Gaza.

The escape of the six prisoners has attracted the full attention of Israelis and Palestinians throughout the week. For many Palestinians, prison release has become a symbol of resistance. Mustafa Barghouti, a longtime independent voice in Palestinian politics, said the news that some of the men had been recovered “does not diminish their heroic achievements”.

“Six militants fought and are still fighting, with their bare hands for days in a fierce battle against the Israeli army and all its security services and technical and financial capabilities,” he said.

Israeli Public Safety Minister Omer Barlev thanked the security forces for their efforts in retrieving four of the six men and vowed that the two remaining fugitives would also be captured.