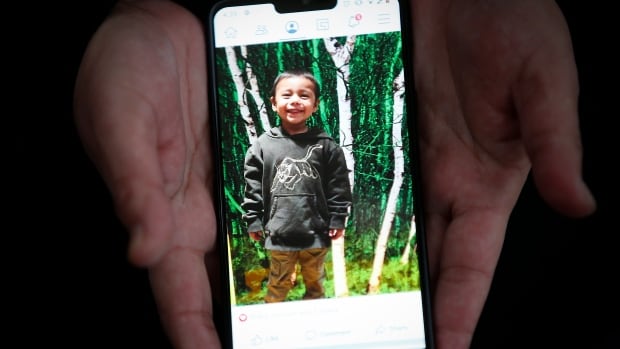 Hours before three-year-old Hunter Straight-Smith was stabbed, Daniel Jensen, who is accused of killing the baby, was told the boy and his mother were planning to leave, the woman told the jury on Tuesday.

Jensen is on trial in Manitoba Court of Queen’s Bench, charged with first-degree murder in the 2019 Hunter stabbing. The 34-year-old pleaded not guilty.

Clarice Smith, Hunter’s mother, told the court Tuesday that before the fatal death. 30 stabbing, Jensen was living with them.

She said that night, she visited several bars and lounges in Winnipeg with a couple of friends and Jensen, with whom she was in a constant relationship, again.

While she was in a car at one point, she Jensen quarreled, Smith told the jury.

He said, ‘I will take your son from you.’– Clarice Smith

She said she could not recall the reason for the dispute, but it escalated.

“He said, ‘I will take your son from you,'” Smith testified.

The threat prompted Smith to decide that she would go with Hunter to her community in Manigotagan, about 150 miles northeast of Winnipeg, without Jensen. She originally planned to bring Jensen with her.

“I do not know where we would go, but I would go [Hunter]somewhere … because I did not feel safe with Dan, “Smith testified.

Smith told the jury that she entered the bedroom where the three slept and dressed Hunter in a sweater and sweater. Then a friend came and persuaded her to go to a bar at the North Hotel on Main Street, so she put him to sleep again.

When asked in court if it was the last time she saw her son alive, Smith said yes and started crying. The trial took a short break.

Smith testified that Jensen became jealous at the bar that night when she talked to some acquaintances.

She later told him there was a change of plans regarding her future arrangements.

“I just told him Hunter and I were going to go to my mom,” she said.

Smith testified that Jensen attacked her and left the bar, and she never saw him again that night.

Crown prosecutors claimed Monday, the first day of the trial, that Jensen was so furious with the boy’s mother that he tried to hurt her in the most cruel way he knew, taking the life of her only son.

Crown AttorneyCourtney St. Croi told the jury Monday that Jensen went to Hunter’s home on Princard Avenue, where he climbed up and stabbed the sleeping boys six times in the neck and face.

Hunter was taken to hospital and placed on life support due to brain damage from severe blood loss. He was removed from the cars three days later and died.

Jensen was initially charged with several felonies, including attempted murder, but that charge later improved.

The trial, which is scheduled to last a month, continues on Wednesday.