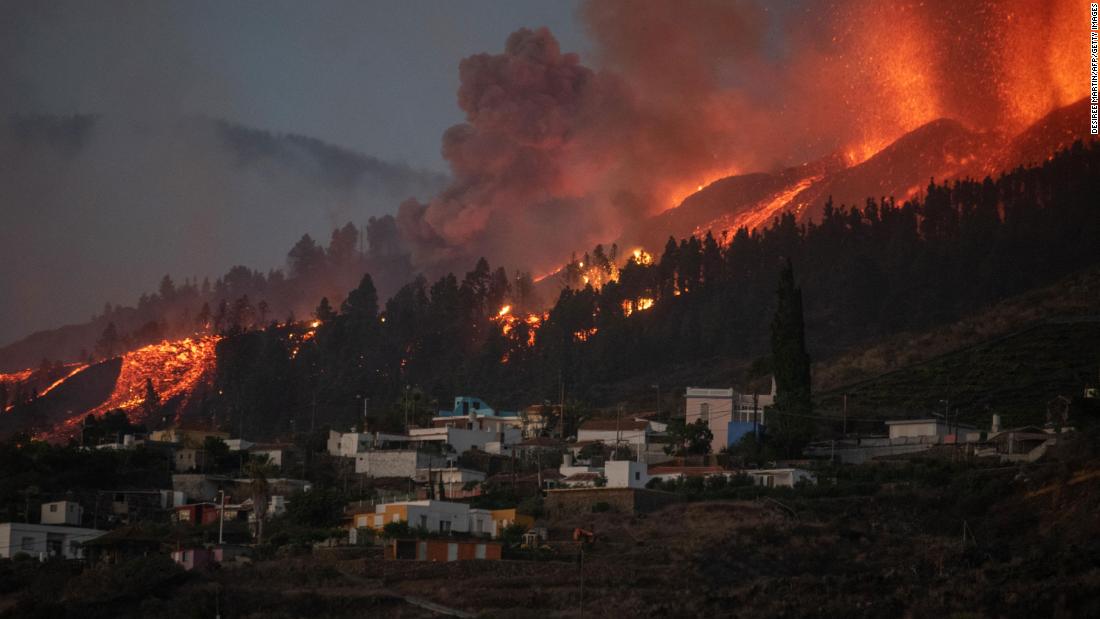 Angel Victor Torres added in a Twitter post that there had been no reports of injuries or deaths so far.

The Canary Islands emergency services posted on Twitter late Sunday that 5,000 people had been evacuated from the area closest to the blast.

That figure included 400 tourists evacuated from a hotel in La Palma and taken to a hotel on the nearby island of Tenerife, Torres told Spanish station SER in an interview.

After a night of spectacular lava images illuminating the island village, Torres told SER that experts believe there is still only one point of eruption from the volcano, near a “lightly populated” part of the island, which has a population of about 80,000 people.

Views from the island showed at least one highway cut from a lava wall; Local officials said some houses were damaged.

Officials have warned locals to keep their distance from the blast.

European Commission President Ursula von der Leyen expressed solidarity with the people of La Palma in a Twitter post on Monday. She added that “we are in contact with the Spanish authorities to provide any additional assistance that is needed.”

Spanish Prime Minister Pedro Sanchez has remained in La Palma, one of the smallest islands in the Canary Islands archipelago off Morocco’s Atlantic coast, after rushing there on Sunday.

After delaying his trip to New York for the United Nations General Assembly, Sanchez and other officials visited an evacuation center on Monday. He would later take a closer look at the volcano and its destruction.

The Canary Islands Volcanological Institute (Involcan) wrote in a statement on Facebook on Sunday that more than 25,000 earthquakes had been detected in the previous nine days around Cumbre Vieja volcano.

Spanish news reports said the last major eruption from the volcano was 50 years ago.

The regional president said about 400 firefighters were on site to fight any fires caused by lava flows.

The Spanish Ministry of Transport wrote on Twitter that it had banned ships from sailing too close to the volcano, due to the dangers posed by lava flowing into the sea.

The Canary Islands are a popular tourist destination for British, German and other European visitors.

CNN’s Al Goodman reported from Madrid with Vasco Cotovio in Lisbon, as well as Martin Goillandeau and Jeevan Ravindran in London.

A new Pokumon trading card game is coming to PC