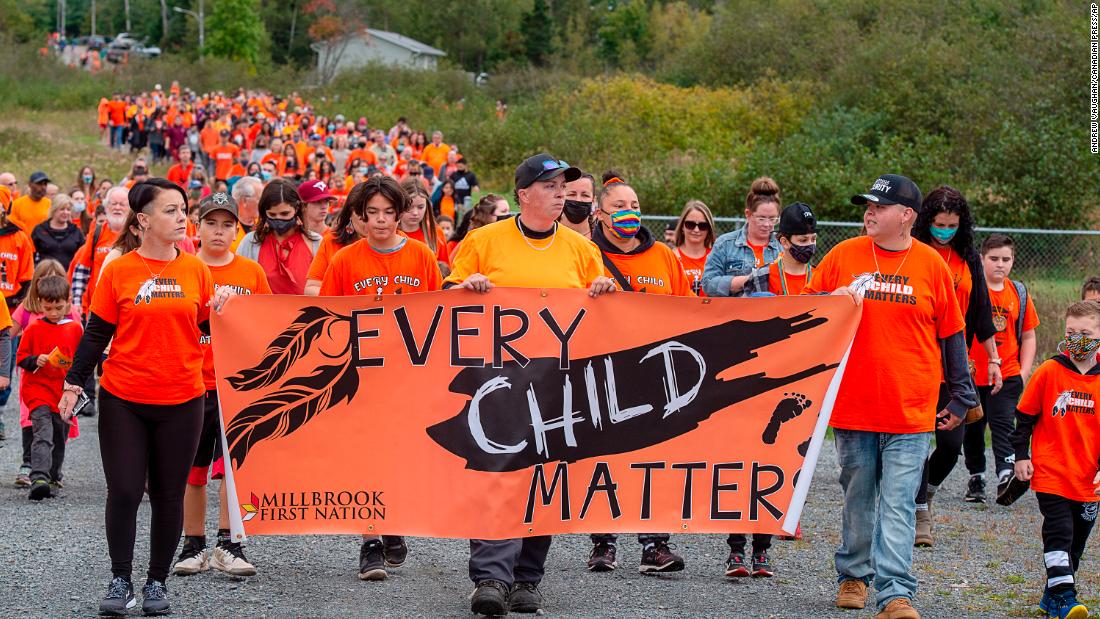 The legal break came a day after a federal court passed a 2016 ruling ordering the Canadian government to compensate indigenous children who were placed in foster care. Thursday National Day for Truth and Reconciliation and the court ruling highlights the history of discrimination and harm to First Nations communities.

Prime Minister Justin Trudeau said the holiday recognizes “the damage, injustice and intergenerational trauma that indigenous peoples have faced – and continue to face – because of the residential school system, systemic racism and discrimination that continues in our society.”

“We all need to learn about the history and heritage of residential schools,” he said in a statement. “Only by confronting these difficult truths and correcting these mistakes can we move forward together toward a more positive, just and better future.”

In 2019, Trudeau said he and his government acknowledged the damage done to indigenous peoples in Canada that was genocide, saying at the time that the government would move forward to “end this ongoing tragedy.”

Estimates show that more than 4,000 children died while in residential schools over a period of several decades, the Truth and Reconciliation Commission of Canada said in a 2015 report the legacy of the residential school system.

The report detailed decades of physical, sexual and emotional abuse suffered by children in government and church institutions.

Earlier this year, hundreds of bones of indigenous children were found in several countries, sparking calls for accountability from lawyers and indigenous people across the country.

The Governor General of Canada Mary May Simon said on Thursday that “the true history of Canada has been uncovered”.

“These are unpleasant truths and often difficult to accept. But truth also unites us as a nation, unites us to dispel anger and despair and to embrace justice, harmony and faith,” said Simon, who is the first indigenous person in her role.
Last week, Canadian Conference of Catholic Bishops apologized for its role in the residential school system and expressed “deep remorse”.

“We acknowledge the grave abuses committed by some members of our Catholic community; physical, psychological, emotional, spiritual, cultural and sexual,” the organization said in a statement. “We also sadly acknowledge the historic and ongoing trauma and legacy of the suffering and challenges facing the Indigenous Peoples that continue to this day.”

Local defenders had demanded an official apology from the Catholic Church and the Pope.

The organization said those requests had been heard and a delegation of indigenous survivors, old and young, was scheduled to meet with Pope Francis in Rome in December.

Tens of thousands of First Nations children who fled their homes and settled into welfare may soon receive compensation after them a court ruling Wednesday.

In 2007, the Care Society and the First Nations Assembly filed a human rights complaint alleging that Canada was discriminating against First Nations children and families living in reserve by not funding child and family services. That practice resulted in many of the children entering custody, they argued.

After years of litigation and court hearings, the Canadian Court of Human Rights ordered the federal government in 2019 to pay Canadian children, parents or grandparents $ 40,000 (about $ 31,000) each, according to court records. They can receive $ 20,000 for pain and suffering and $ 20,000 for discriminatory practices.

Children who entered custody before 1 January 2006 and remained in custody until at least that date may be entitled to compensation, court documents show.

While it is unclear how many people can be compensated, the Assembly of First Nations has previously estimated that up to 54,000 could benefit.

The national government challenged the decision, but the Federal Court of Canada overturned it and upheld the previous ruling Wednesday.

“It is undisputed that the First Nations occupy a unique position within the constitutional legal structure of Canada. Furthermore, no one can seriously doubt that the people of the First Nations are among the most disadvantaged and marginalized members of Canadian society.” Justice Paul Favel wrote in his decision.
CNN turned to the Care Company for comment. Assembly of the First Nations described the verdict as “monumental” and one that claims that indigenous children and their families deserve justice.

“This is justice in action for the children and families of the First Nations, however, nothing can replace childhood and ties to the languages, lands and loved ones stolen from Canada’s discrimination. We have consistently made a reasonable and “Canada’s right to stop fighting our children in court not only for the sake of truth and reconciliation, but also for the healing path forward,” RoseAnne Archibald, national leader for the Assembly of First Nations, said in a statement.

CNN’s Paula Newton and Max Foster contributed to this report.

How to add checkboxes in ToDo list to Google Docs