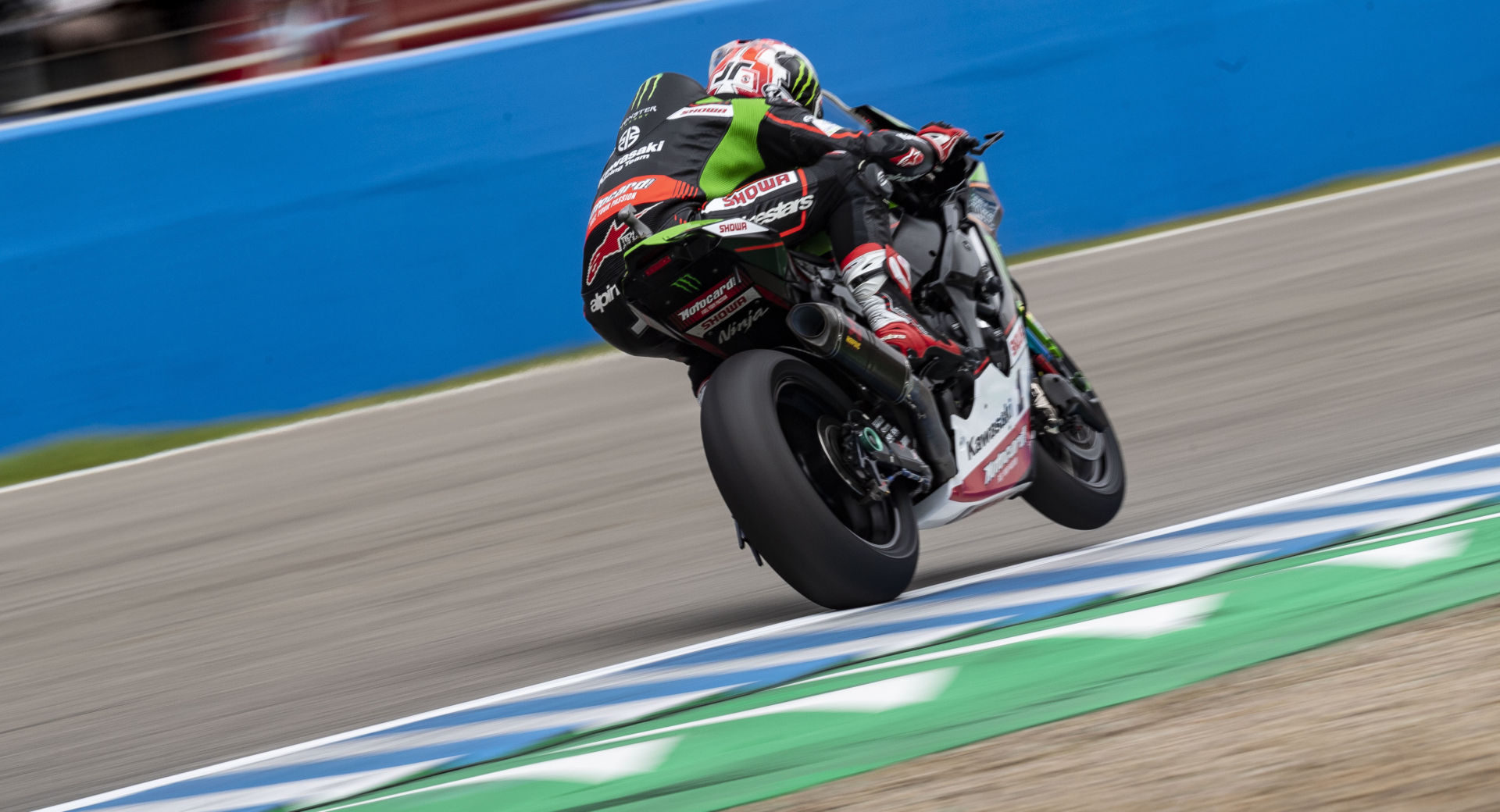 More, from a press release issued by the Dorna WorldSBK Press Office:

11 riders covered in less than nine tenths of a second, the Portuguese Circle Motul is forming as a thriller

The 2021 MOTUL FIM Superbike World Championship season is in its final stages as the final European round emerges at the Autodromo Internacional do Algarve for the Portuguese Round Motul. Pista Portimao welcomes the next chapter of the Championship duel and the first day the lead went to Jonathan Rea (Kawasaki Racing Team WorldSBK), with Ulsterman leading a Kawasaki 1-2 in Portugal.

It was a strong session for Jonathan Rea (Kawasaki Racing Team WorldSBK), as the Portimao master headed FP1 on Friday morning before continuing to finish first again in the afternoon. Rea improved by less than six minutes to add his lead over the rest of the field, completing a solid opening day job. Teammate Alex Lowes was third in FP1, with both Kawasakis showing off strongly in the coldest temperatures. Lowes improved his overall time in the final 20 minutes of the second session, which means he finished in overall place.

Finishing in third place at the end of the first day and looking like his old self, Garrett Gerloff (GRT Yamaha WorldSBK Team) was in third place and came back with the pace. The American rider was second in FP1, but was only hit by Lowes in the overall standings at the end of the day. He led the Independent charge while Loris Baz (GoEleven Team) joined him in the top six overall in the sixth. The super-sub-Frenchman, replacing Chaz Davies, is at the right pace in the county where he returned to the podium last year after a six-year wait. Baz did 38 laps, more than anyone else in the top six, taking valuable time on the track with the Ducati Panigale V4 R.

It was a very promising first day at the Portimao office for Honda, with Leon Haslam (Team HRC) one of the biggest upgrades compared to the morning time. The pocket rocket crashed 1.2 hours from its morning time, running well within the first three for most of the second half of the second session. On the other side of the garage, the sun was also shining as Alvaro Bautista was within the top eight in FP2 and for most of the session, less than half a second from first place. As a result of the first day, Haslam finished in fourth place overall, with Bautista in ninth.

It was a strong day for Yamaha after Toprak Razgatlioglu (Pata Yamaha with Brixx WorldSBK) started his weekend. The Championship leader, who had a 20-point advantage, was fourth in the morning session and was consistently within the top four in the afternoon. Toprak set very steady lap times, with many laps all within a few tenths of his fastest time, but eventually, he finished fifth. Teammate Andrea Locatelli had a pretty quiet day overall, going into his business in the top eight and finishing the day in tenth overall.

WORK P TOR TO BOR: Ducati and BMW are ready for Saturday improvements

It was not the first easy day in Portimao for Ducati, with Scott Redding (Aruba.it Racing Ducati) ranking at the top of Ducati in the morning in sixth place, while teammate Michael Ruben Rinaldi was only 13th. . Both were well within the top ten in FP2, but only Rinaldi was able to improve, as Redding lost time on the pitlane following a technical issue. Going out for a flying lap at the end of the day and setting his fastest time, Redding finished in seventh place at the bottom of the business, while Rinaldi was eighth.

Friday saw another complicated start for BMW, with no representation within the top ten. Michael van der Mark (BMW Motorrad WorldSBK Team) was slightly faster in the afternoon than in the morning, but also consistent, with both cases in group 142.3. For Eugene Laverty (BMW Motorrad WorldSBK Team), he was back in action in place of the injured Tom Sykes and finished the day in 15th place, although the Irishman suffered a technical problem in his last run at the end of FP2.

HOLIDAY: a surprise from afar?

FAMU Professor elected to the International Board of IFOAM Organics

Why Warby Parker sees a big future in physical stores