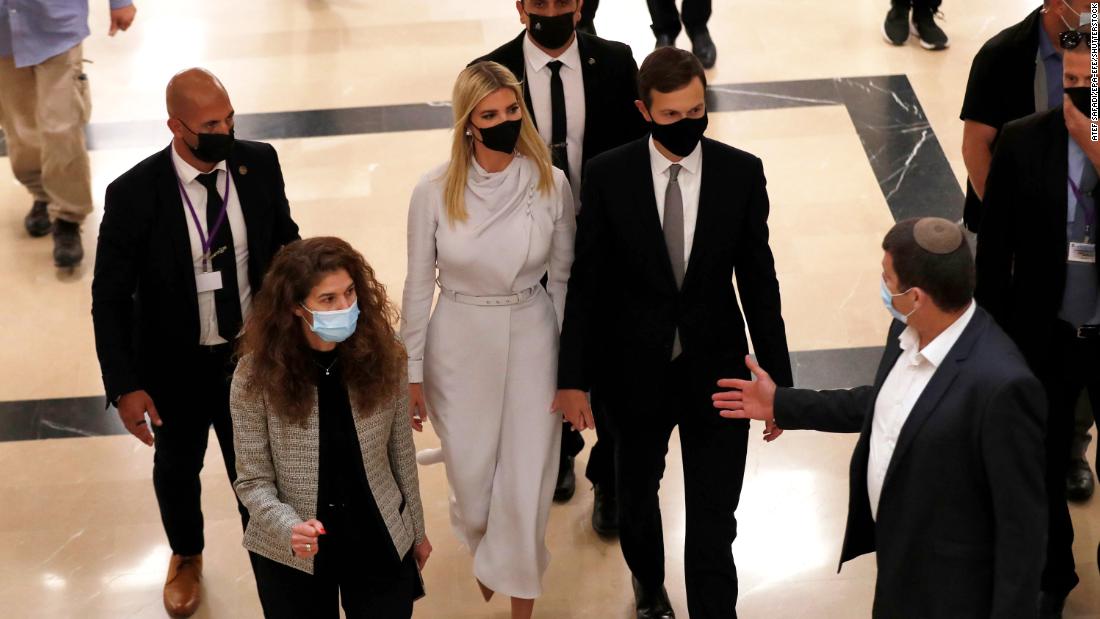 “That’s where the royal family goes,” said one participant, Ivanka Trump and Jared Kushner were flooded with greetings and selfie requests.

At the new Museum of Tolerance, highlights from the signing of the Abrahamic Agreements were played as the daughter and son-in-law of former President, former Secretary of the Treasury Steve Mnuchin, former Secretary of State Mike Pompeo and other Trump administration alumni mixed with rich and powerful on ceviche, steaks and lots of drinks.

The whole event had a “Alice in Wonderland” feeling, as if those present had fallen through the glass and in an alternate reality where Donald Trump was still President of the United States and Benjamin Netanyahu was still Prime Minister of Israel.

In theory, this was a starting point for the Friedman Center for Peace through Force, an organization founded by former US Ambassador to Israel David Friedman, who seeks to advance the Abraham Accords – the US-mediated September 2020 agreement on normalize relations between Israel and the United Arab Emirates, Bahrain, Sudan and Morocco.

In practice, it felt like a Trump reunion and a campaign event for Pompeo, who received an award recognizing his work on the Abraham Accords, stubbornly avoiding journalists.

Many in attendance loudly wanted Pompeo to run for president of the United States in 2024 – something he is said to be considering if Trump does not run again.

“We have to order Pompeo wine!” said the wife of a diplomat at the bar when she learned that some of the drinks offered were from the Psagot wine cellar, located in an Israeli settlement on the West Bank that she named one of its reds after Pompeo last year.

The others were even clearer.

“Time is running out for the Trump administration and we saw some of your accomplishments behind us, but we hope President Pompeo will continue down that path,” said billionaire philanthropist Sylvan Adams, a co-chair of the event, with great applause. that he thought architects Pompeo and Abraham Accords would have been a “much more deserving” Nobel Peace Prize winner this year.

The current leaders of the US and Israel, President Joe Biden and Prime Minister Naftali Bennett, may not have existed. Only one member of the Israeli cabinet’s service – Interior Minister Ayelet Shaked – appeared to be present.

In a brief interview with CNN at the event, Friedman said he had remained in close contact with Trump administration alumni who flew over the event and that it had not been difficult to force them to make the long trip to Israel. . Kushner and Trump arrived at 4 a.m. Monday morning and left the same evening.

“I love all these people: Jared, Ivanka, Mnuchin, Pompeo; We worked very closely together, we really liked each other – which is unusual, by the way, for administrations in politics – and it’s good to see everyone here in Jerusalem, “he said.

Earlier in the day in the Israeli parliament Kushner, Trump, Netanyahu and others had attended the launch of the Abraham Accord group. The group, made up of more than 100 members of parliament, aims to work on measures to expand the Abrahamic Covenants.

And while the evening celebrations seemed to be a toast to the Trump administration, the Knesset event had the feel of a Netanyahu campaign rally.

Almost every time the name of the former Israeli prime minister was mentioned, parts of the audience burst into applause. The same cannot be said whenever the names of Biden or Bennett appear.

When Netanyahu arrived — halfway through the event — with his wife Sara in retreat, about a quarter of the audience made a standing ovation, despite the fact that the Moroccan Ambassador to Israel was in the middle of the speech at the time.

During his speech Netanyahu filled himself, quoting excerpts from his book and old speeches that he said perfectly presented how peace could be achieved with the Arab nations.

Welcoming the work done by the Trump administration to reach such agreements, Netanyahu said he believed he and Kushner, along with the rest of the Trump team, had “changed history.”

Just hours later Netanyahu, who appears to have taken a page from the former president’s playbook on how to deal with your successor, condemned Bennett from the Knesset stage, saying he “was not a real prime minister “.

For both Netanyahu and the Trump crew, this was a day spent enjoying past glories, looking back at what had been and forward – perhaps – to what might come again.

“Progress on a number of fronts” after US-Taliban meetings, says spox State