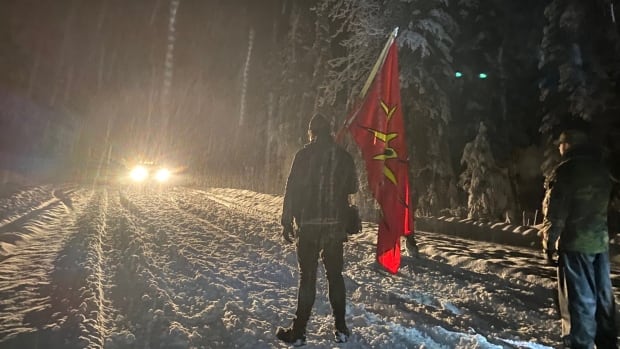 Fifteen other people, including two journalists and a key leader in the fight against the offshore gas pipeline, were arrested Friday as police action continued against opponents of the project being built west of Prince George, BC.

The RCMP broke down the door of a resistance camp, known as Camp Coyote, which has occupied a key job for Coastal GasLink since Sept. 25, and arrested several residents, including two whom police say identified themselves as journalists.

The camp had thwarted Coastal GasLink plans to drill a tunnel for the natural gas pipeline under the Wedzin Kwa or Morice River.

Police say that upon arriving at the camp on Friday, they read a copy of a notice from the BC High Court order allowing the pipeline construction to move forward and warned those inside to leave several times, before entering by force and arrest.

So far, a total of 29 people have been arrested for violating the order of the BC High Court in a multi-day operation by the RCMP, which the police force says has also included the removal of felled trees and inverted equipment for it. made forest service roads that support the construction of pipelines. passable.

Renovated blockage of the Wetsuweten pipeline results in arrests

Several people were arrested in an illegal barricade set up by Wetsuweten members and hereditary leaders who oppose the offshore gas pipeline, despite the project having the support of elected First Nations leaders. 2:06

On November 18, 14 people were arrested after the RCMP dismantled blockades along the Morice River Forest Service Road leading to two labor camps.

The blockade blocked about 500 Coast GasLink employees, prompting water rations and fears of food shortages as the company refused to comply with an eviction notice issued by the Gidimt’en checkpoint, which controls entry into part of the territory. Wet’suwet’en.

Police said of the 14 people arrested on Nov. 18, one has been released without charge, eight have been released on parole and five are being transported to Prince George for a court appearance Monday.

The detainees on November 19 are being held by the RCMP in Houston, BC prior to their first court appearance.

Jennifer Wickham, media coordinator for the Gidimt’en checkpoint, said her sister Sleydo ‘(Molly Wickham) was among those arrested Friday.

Sleydo ‘has been a key voice of the opposition and the organization against the pipeline.

The Canadian Association of Journalists said the detainees included photojournalist Amber Bracken, who was in charge of The Narwhal newspaper, and documentary filmmaker Michael Toledano.

Sleydo ‘said last month that Gidimt’en members are taking their stand now to protect Wedzin Kwa, or the Morice River. “They are our sacred springs, our pure drinking water and our salmon river,” she said.

In 2020, the implementation of a BC Supreme Court order led to nationwide protests, including the closure of railways in eastern Ontario.

Members of the Gidimt’en Clanhave once again called on supporters to repeat history and close key infrastructure, such as highways and railways.

In response, support rallies were held in communities across Canada on Friday, including Victoria, Toronto, and Caledonia, Ont., Where the Highway 6 bypass was closed.

“The Wet’suwet ‘people have protected yintah (territory) for thousands of years and it will never stop,” Wickham said.

Coastal GasLink has signed agreements with 20 councils of selected First Nation groups along the pipeline route, including from the Wet’suwet’en territory, but has not won the approval of a majority of the successor chiefs.

In an online statement, Coastal GasLink confirmed that supplies had reached the two workers’ camps that had previously been disrupted. The company called the steps taken by the RCMP “unfortunate” but necessary to restore access to bring supplies, including food and water, to their employees and contractors.