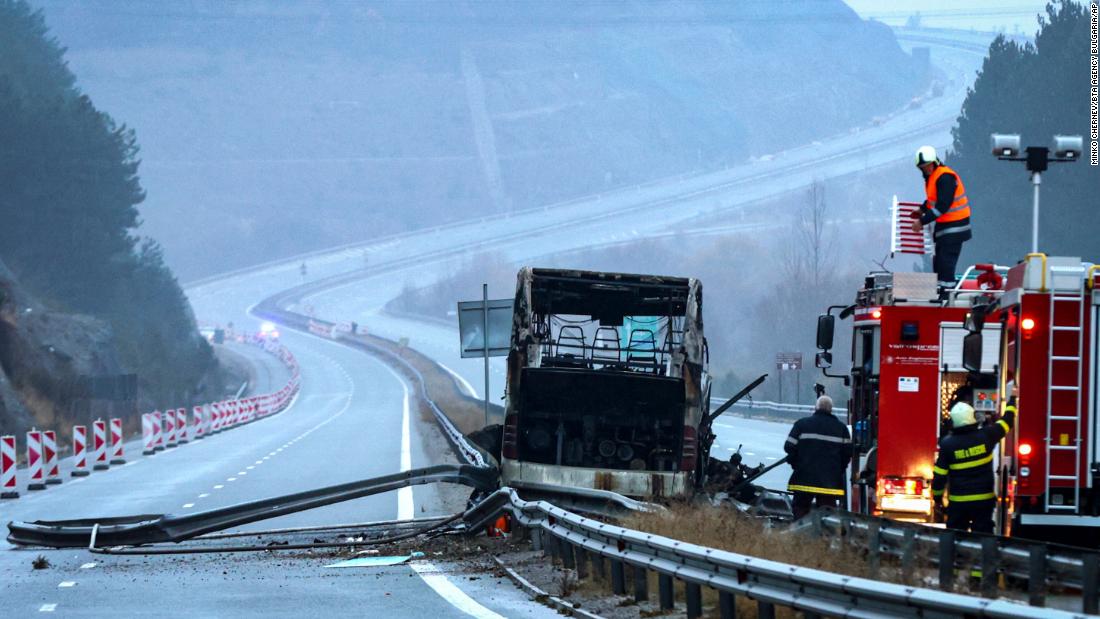 Authorities believe the bus was carrying a total of 52 passengers, including 12 children, most of whom were tourists from northern Macedonia, when the incident occurred around 3am local time on Tuesday morning.

The bus, which had a Northern Macedonian registration, was traveling on the Struma highway west of the Bulgarian capital Sofia. The bus driver was among the dead, according to Bulgarian National Television (BNT).

After initially reporting 46 deaths, authorities later said it was unclear whether 45 or 46 people had died, BNT reported.

Seven people who were thrown from the burnt bus were rushed to a hospital in Sofia and were in stable condition, hospital staff said, according to Reuters.

Bulgarian Interior Minister Boyko Rashkov said the bodies were “piled up inside and burned to ashes”.

“The picture is scary, scary. I have never seen anything like it before,” he told reporters in the country.

The cause of the accident was unclear, but the bus appeared to have hit a highway obstacle either before or after it caught fire, Bulgarian officials said.

Footage from Nova TV Bulgaria showed the burnt remains of the bus on the side of the highway, with the broken barrier inserted under the vehicle.

Emergency responders were seen standing next to fire trucks and a police van, while an investigator in a white protective suit observed the scene taking pictures. Behind the vehicle, damage to the central divider was evident with debris scattered on both sides of the highway.

The coaches’ holiday was returning to Skopje, the capital of Northern Macedonia, from a weekend break in Istanbul, a journey of about 800 km (500 miles).

“The human error of the driver or a technical malfunction are the two initial versions of the accident,” he said.

“This is a great tragedy,” the Prime Minister of Northern Macedonia, Zoran Zaev, told reporters in Sofia, expressing his condolences to the relatives of the victims.

Zaev said the passengers were all from northern Macedonia, but apparently included a Serbian citizen and a Belgian citizen. It is not known if both were among the victims or injured.

Zaev said he had spoken to one of the seven survivors, who told him the passengers were sleeping when they woke up to the sound of an explosion.

He said people sitting in the back of the bus were able to break a window and jump out.

Zaev said the passengers were from different communities in northern Macedonia, a country of 2 million bordering Bulgaria and home to an ethnic Albanian minority.

In Skopje, ethnic Albanian Osman, 31, told Reuters he had come to the travel agency office with his brother and sister asking for information about their parents.

“We do not know if they were on the bus that crashed or not. We have no information about them. The agency is not answering the phone. Maybe we will have to go to Bulgaria,” he said.

“Great pain for the 45 lost lives of Albanians from Northern Macedonia during the tragic accident in Bulgaria,” he wrote on Twitter.

Bulgarian officials have launched an investigation into the incident, state media reported.