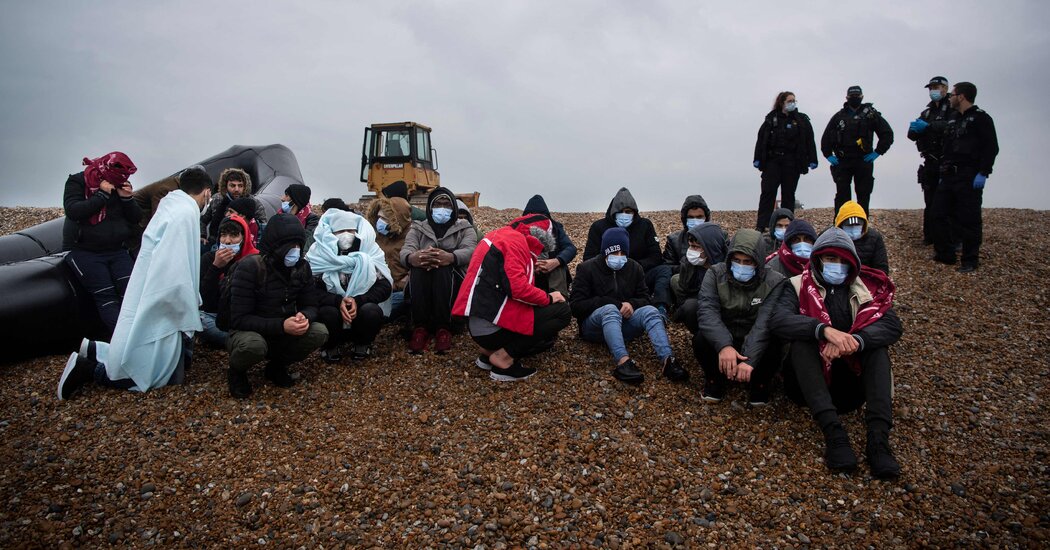 The French denounced Mr Johnson’s statement in blunt terms, calling it unacceptable and not inviting British Home Secretary Priti Patel to a crucial meeting on the immigration crisis on Sunday.

The dispute, shortly after one of the deadliest catastrophes ever on the English Channel, highlighted the diplomatic obstacles the two countries face in addressing the problem, as protracted Brexit tensions and disputes over issues including trade and fisheries rights continue to strain relations. .

In a letter sent to French President Emmanuel Macron on Thursday night, Mr Johnson wrote that France and Britain should establish a bilateral readmission agreement to allow the return of all illegal immigrants crossing the Channel, suggesting that if France receives migrants. it would be a big step towards solving the problem.

The letter provoked a strong reaction from Gabriel Attal, a spokesman for the French government, who said the letter was both poor in content and completely inappropriate in its form.

Enough with the double speech, enough with the constant externalization of problems, Mr. Attal, visibly irritated, told BFMTV on Friday morning. Makes you wonder if Boris Johnson does not regret leaving Europe, because whenever there is a problem, he thinks Europe should address it.

Grald Darmanin, France’s interior minister, quickly announced that Ms. Patel was no longer invited to an urgent meeting that France will hold in Calais on Sunday with ministers responsible for immigration from neighboring countries such as Belgium and Germany.

Mr Macron said on Friday that the crisis required serious co-operation, but Mr Johnson’s letter was not a serious effort.

You do not communicate from one leader to another about these issues with tweets and letters that you make public, we are not signalers, come on Mr. Macron said at a press conference in Rome, where he was on an official visit.

On Wednesday, about 30 migrants aboard a weak inflatable boat drowned in the cold waters of the English Channel and most of them men, women and children drowned. French prosecutors have opened an investigation to determine the exact circumstances of the disaster and the identity and nationality of most of the victims have not been confirmed.

The number of migrants heading out to sea has increased in recent months as France has hit other routes to England, particularly by ferry or by truck and train through the Channel Tunnel. So far this year, there have been 47,000 attempts to cross the Channel, and 7,800 migrants have been rescued from shipwrecks, according to French officials.

On Twitter, where he too published the full letter to Mr. Macron, Mr. Johnson wrote that an agreement with France to repatriate migrants crossing the Channel through this perilous route would have an immediate and significant impact.

If those arriving in the country were to return quickly, the incentive for people to put their lives in the hands of traffickers would be significantly reduced, Mr. Johnson said. He called it the only biggest step both countries can take to address the issue.

He also described other proposals, including better intelligence sharing, joint police patrols off the French coast which France has already refused, and reciprocal naval patrols in each country’s territorial waters.

But French officials reacted angrily Friday morning to the suggestion that France should take migrants, calling the idea a start and accusing Mr Johnson of using the migration crisis for domestic political purposes.

Mr. Darmanin, in a letter sent to Mrs. Patel and so on seen by Agence-France Presse, said that he was disappointed by the requests made in the letter of Mr. Johnsons and it was even worse that he had made them public.

Mr Attal, a spokesman for the French government, told BFMTV that the publicly distributed letter did not match the exchanges Boris Johnson had with the President on the phone on Wednesday evening.

Mr Attal added that the suggestion that France should take migrants arriving on the British coast is definitely not what we need to solve the problem. Instead, he said, Britain should send its immigration officials to France, where they will examine the claims of asylum seekers trying to reach the British coast.

Grant Shapps, British Secretary of Transportation, defended Mr Johnson’s letter, telling the BBC that friends and neighbors should work together, and that he hoped France reconsidered not inviting Mrs. Patel.

It is in our interest, he said. It is in their interests. It is certainly in the interest of the people who are being trafficked to people in the UK, with these tragic scenes they were seeing.