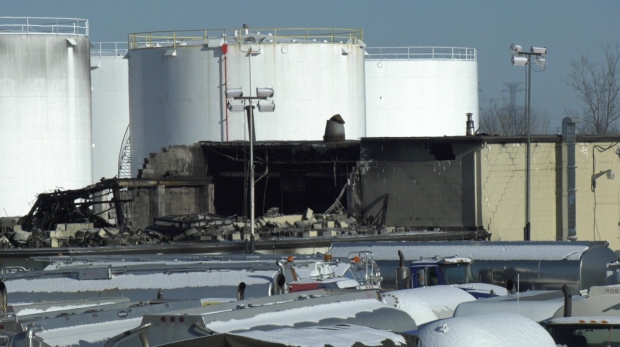 One person has died and five others remain missing after an explosion at a building in southern Ottawa late Thursday.

The blast and massive fire at Eastway Tank on Merivale Road sent three people to hospital, including two in critical condition. One of those people has died since then, police said Friday morning.

Police say four men and a woman remain missing. It is believed they were in the building when the blast occurred.

Police are not revealing their identities, but say their families have been notified.

“It is not believed that any survivors will be found,” Insp. Frank D’Aoust told reporters Friday.

Relatives have publicly identified one of the victims of the Rick Bastien tragedy from Luskville, Que.

“Right now I am overwhelmed with emotions, the ones I have never felt before.”

Bastien added the statement Friday afternoon, saying: “My father was one of the most zealous guys I have ever known.”

Recovery efforts are underway at the severely damaged site, he said, along with an investigation into what caused the blast and fire.

Eastway Tank Pump & Meter Ltd. is a custom manufacturer of tank trucks for the North American and international market.

Neil Greene, the owner and president of the family-run business, said he was “completely devastated”.

With great sadness we learned that as a result of the tragic explosion one of our colleagues lost his life, with five missing and one in hospital. “My heart goes out to their families, loved ones and all our employees who are experiencing this deep loss,” he said in a statement on Friday.

“We remain in close contact with investigators and will co-operate with the authorities on all subsequent investigations. We want to understand what happened.

“I’m utterly devastated. To the families of our lost colleague and all our employees, please know that Eastway Tank will be there for you without fail in the coming weeks and months. My deepest condolences to all of you .

The company was founded in 1968. Their product lines include diesel trucks and trailers, water trucks, military fuel and fire trucks, according to the company’s LinkedIn website.

The tanks that produce and serve are used to transport gas, oil, propane and water.

On Thursday evening, police asked all employees and families to attend a “reunion center” at Woodvale Pentecostal Church on Greenbank Street. Family members could be seen comforting each other outside.

Ottawa Mayor Jim Watson posted on Twitter his deepest condolences to the family of the employee who died and urged residents to pray for the families of the five employees who are missing.

No words can take away the stress and devastation as these people wait for news about their relatives and friends, Watson wrote on Twitter. My sincere thanks to our first responders for their extraordinary efforts to save lives and control the fire in very difficult conditions.

I want to express my deepest condolences to the family of the employee who passed away as a result of the horrific fire yesterday in Nepean. I also ask all residents to pray for the families of the 5 missing employees. 1/2

Thought it was an earthquake

The flames and black smoke could be seen from the commercial building on Merivale Street around 1:30 p.m. Thursday.

Ottawa Fire Service officials said 911 callers reported hearing an explosion before seeing the 15-foot flames passing through the roof of a structure.

Account. Tim Tierney said he was visiting an Ottawa City facility a few feet away from the building when the fire started.

“I actually thought it was an earthquake at first. The ground was shaking and then suddenly, a few seconds later, I suddenly heard the noise,” Tierney told the Newstalk 580 CFRA. Ottawa Now with Kristy Cameron.

Three people who were in the building at the time were taken to hospital. One has been released from the hospital and the other is in serious but stable condition, police said on Friday. Even a firefighter was treated for minor injuries.

Crews brought heavy equipment Thursday night to help put out the fire. Acting Ottawa Fire Chief Paul Hutt said there was no danger to residents in the area.

“As we put out the fire, there is water leakage that is happening as a result of water being thrown from us into the fire. I want to reassure residents that there is no concern that we have our HAZMAT team on site,” Hutt said Thursday.

Otava Coun. Keith Egli, who represents the area, said the city is thinking about the families, friends and colleagues of the victims’ employees.

“We have come together as a city, we have been a strong city and a supportive city, so hopefully all those people know what they were thinking about them, they were praying for them as they went through this,” he said.

I hear a loud noise

Witnesses reported hearing a loud bang before the fire started.

“I was serving a client, I just finished working with him and I heard a loud noise. The next thing I know is a very big cloud of black smoke,” said Jesse Headland, who works at the nearby Francis Gas Bar.

“He’s coming ‘very high’ and eventually I see some flames hidden behind the truck. Probably the biggest thing I’ve seen in my nine years working here.”

“I am sitting eating my lunch and I smell smoke. When I went out to look out the window I saw a lot of big flames.”

Sean McKenny, president of the Ottawa and County Labor Council, said his focus at the moment is on workers and their families.

“Something went wrong here, and that’s a question I know will arise tomorrow and the day after tomorrow,” he said. “At the moment, our focus is certainly on those workers and their families who have been affected and affected as a result of that horrific tragedy.”

It is time to move on

Jarvis: Schools reopen Monday, now we need to make sure they stay open