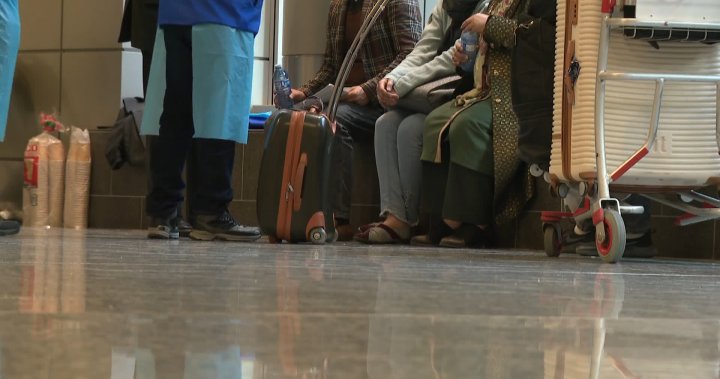 On Friday, 170 refugees from Afghanistan, dozens of whom are human rights workers, arrived in Edmonton.

The group landed in Calgary earlier this week and traveled to Edmonton by bus. Agencies have been working for months to bring them to Edmonton, Catholic Social Services (CSS) said.

“We finally got the confirmation that yes, in fact, they are coming, everyone can come to Edmonton and they will arrive today,” said Kathryn Friesen, director of immigration for CSS.

The refugees fled Afghanistan during the Taliban uprising in August 2021 and had been in hiding until earlier this week, when a flight could be booked, the CSS said.

“They are human rights workers, human rights defenders,” Friesen said. “They were doing that job in Afghanistan, which put them in a very precarious situation when the Taliban took over the country and they had to leave Pakistan immediately.

“They were marked as a very vulnerable group and Canada took on the challenge of agreeing to bring them here.”

The Liberal government initially pledged to resettle 20,000 Afghan refugees, but increased that promise during the federal election campaign to 40,000.

The new Minister of Immigration vows to help Afghan refugees on October 27, 2021

“Edmonton and our agency, CSS, our community sector colleagues have all been excited and willing to welcome this very resilient, very agile group who has really done a great job in the field in Afghanistan. , ”Said Friesen.

“Many of those who came worked for decades documenting human rights abuses and war crimes in Afghanistan and intend to continue their work once settled, with the help of Canadian and international NGOs,” CSS added in a statement. for the press.

Alberta man helps family flee Afghanistan: ‘Not for the faint of heart’

Friesen said these particular refugees have a high level of English and are highly educated. Forty percent of them are children, she said.

Many are choosing to keep a lower profile and not speak publicly about their resettlement for security reasons, Friesen explained.

“It can be a very dangerous situation. “Because if they have family members or friends at home and have a high profile in the community, they may target people in their own country because of what is happening here.”

4:22
The Afghan who protected the Canadians makes a great escape

The Afghan who protected the Canadians makes a major escape on November 26, 2021

“We want to make sure they get the message out loud and clear that every Canadian wants you to succeed because, if you succeed, Canada succeeds.”

Birjaneian emigrated from Iran in 1988 with his family. Now, he works with young immigrants with CCIS and as co-chair of the national resettlement project in Afghanistan.

We want them to come here to love this country, to be part of this great country and to build on the success we have.

He said these refugees are bringing a huge amount of potential. In fact, eight newcomers from Afghanistan six weeks ago were hired by CCIS to help greet other newcomers.

“We went to the airport, we had the last 10 arrivals as volunteers and some of them as staff. “We hired eight of those newcomers who came to Calgary six weeks ago – because they are educated, they speak the language, they have experience, so we hired them,” Birjaneaian told Global News.

“When you go to the airport and people are coming in and someone says to them in their own language, ‘Welcome. Thank you for coming to Canada, Calgary, and they ask, “When did you come?” They say: ‘Six weeks ago’. That changes everything. They say, ‘Wow.’

“They see that they look like other people around them… I think that ‘s the key.”

Upon arrival, the newcomers will end their quarantine in Edmonton.

CSS will relocate them to the city, providing housing, guidance, language assessment, and other resources as needed.

CSS supports 10,000 to 15,000 new arrivals in Canada each year and has helped resettle 118 Afghan refugees in Edmonton and Red Deer since August.

The trip for them was supported by Front Line Defenders and and Immigration, Refugees and Citizenship Canada (IRCC).

4:20
The Afghan refugee recalls the perilous journey to Pakistan

“People like human rights defenders and people who have worked with Canada in Afghanistan and are now being targeted because of the work they have done for our country.

“This is a good opportunity for Edmonton to show how we can welcome people into our community and hope to do so well so that we can continue to bring in newcomers to our community and truly have a society that focuses on the social inclusion of refugees. “

She said the community response in recent months has been “stifling and heartbreaking”.

Narendra Modi to interact with over 150 startups via videoconference today