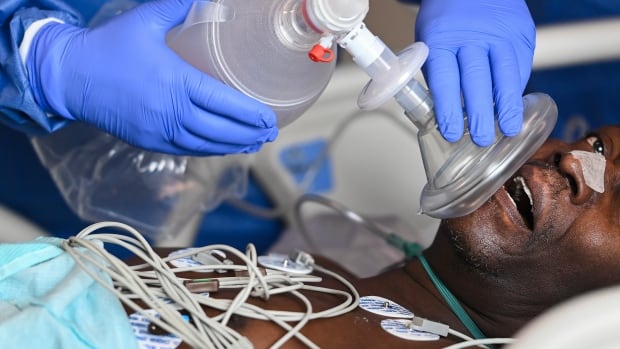 The ALberal MP, who works as a doctor, says he is in favor of forcing unvaccinated Canadians to pay some sort of special tax, and he believes others in his party agree.

“We already have taxes on tobacco. We have taxes on alcohol, which are there for similar reasons, because people who consume those products are more likely to end up in hospital,” MP Marcus Powlowski said at a panel discussion with fellow MPs. broadcast Saturday. on the CBC House. “And as a result, we will all have to pay for their hospitalization.”

Quebec Prime Minister Francois Legault tossed out the idea of ​​imposing a substantial tax on the unvaccinated this week as hospital admissions in that province continued to rise.

The new federal model released on Friday warned that the Omicron variant could lead to record levels of hospitalization in the coming weeks.

The tax proposal is controversial. Opponents warn that they may violate the principles of the Health Canada Act on universality and accessibility.

But Legault’s idea also has its supporters.

The operation, which would allow him to use his arms for the first time, was scheduled for November and was later canceled due to system limitations brought about by the pandemic. It has not been rescheduled.

“You’re preparing your baby, we’re saying to him, ‘You’ll have muscles in your arms, you’ll be able to move your arm.’ And then it was, ‘OK, well, you’ll not be able to do that. . ‘ “So he was very, very upset,” she said House. “His life would have changed drastically now.”

Heppner said she wants those who still refuse to get a vaccine to realize that their decision has the potential to affect many others.

A mother describes how a canceled operation has affected her son and MPs Marcus Powlowski, Stephen Ellis and Don Davies discuss the health tax proposed by Quebec for unvaccinated people. 17:01

“People who are taxed for not being vaccinated is a really good idea. Smokers are taxed. It’s not a new idea,” she said. “I think at this point we have to do everything we can to reach some people.”

“We have to do this because, indeed, if you look at the numbers, most of the people admitted to the hospital, the ICU, are unvaccinated,” he said. “So whatever we can do to increase the number of vaccinated people is certainly desirable, in my mind and in the mind of the party.”

His government’s stance is less clear. Prime Minister Justin Trudeau told reporters this week that he wants to see more details before commenting on whether Quebec’s proposal might work.

Mandates are not ‘producing the results we want’ MPs

Conservative MP Stephen Ellis, a family doctor, worked as one of the medical leaders in Nova Scotia’s response to the COVID-19 pandemic before it was resolved last fall. He said governments are using ever-bigger sticks to force people to be vaccinated.

“I do not know of any carrots we have used here, except to say, of course, if you are vaccinated, your chances of getting sick are much less,” he said during the House Discussion panel. “Everything we have done has given mandates to the people and it is clear that it is not producing the results we want.”

New Democrat health critic Don Davies said he also doubts taxing the unvaccinated would work. He stressed that some Canadians do not have the same access to vaccines as others.

“So I think the best way to go is, we have to keep giving the right information, education and stimulating vaccination,” he said. “And I think that’s a more productive way to go in the short term.”

Both Davies and Ellis said more needs to be done to distinguish between those who are reluctant to get vaccinated and those who refuse to be vaccinated. Ellis said he has seen it in his practice.

“Our job is to build trust”

“When someone came into the office and he had significant problems or hesitation about … vaccines or treatment, our job is to build trust, build a relationship and then encourage those people to develop the behavior we want to see. changed, ”said Ellis.

“And when we do that in a polite and caring way, in a way that is hand-held, in a way that shows those people that we respect them and that we are also content experts, we know then the likelihood of change increases. significantly. “

Conservative leader Erin O’Toolehas said he wants the unvaccinated to be accommodated.

But frustrations are mounting as the number of cases increases and hospitals struggle to cope with staff fatigue and burnout.

NDP Davies said everyone could have empathy with patients who have had their surgeries and other medical procedures postponed because beds are being taken by people who ignored the advice of public health officials.

“But I also think equally, we should base our policy positions on evidence and science, and PKD is interested in what works,” he said.

“You know, we like to think of ourselves as a healthcare party. We passionately believe in universal access to care without financial barriers and we uphold this principle very carefully. So, you know, the Quebec proposal is a proposal of “It’s unprecedented. There is no real evidence of what impact it could have.”

For now, Quebec’s proposal for a tax on the unvaccinated is just a recipe, waiting to be completed.