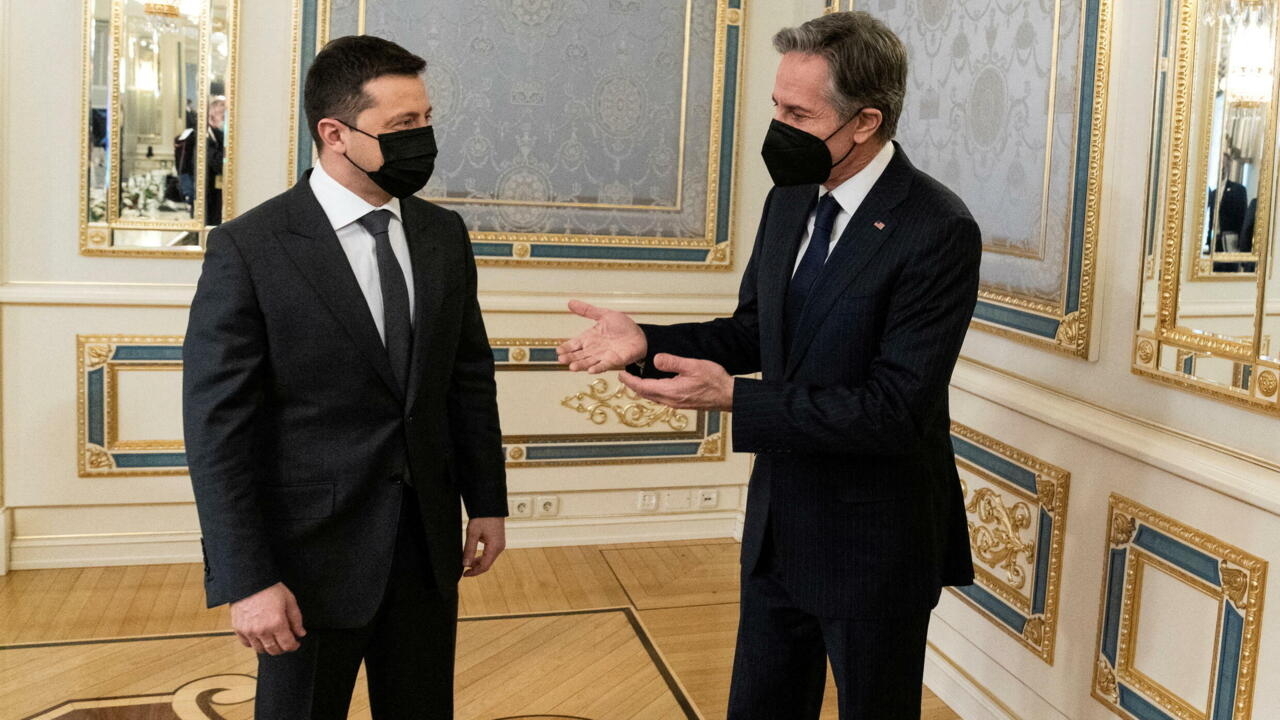 US Secretary of State Antony Blinken said Wednesday that Russia could launch a new offensive against Ukraine with “a very short notice”, but that Washington would pursue diplomacy for as long as it could, although it was not certain. what Moscow really wanted.

On a visit to Kiev to show support for Ukraine, the top US diplomat said Ukrainians need to prepare for difficult days. he said Washington will continue to provide defense assistance in Ukraine and renewed a promise of heavy sanctions against Russia in the event of a new invasion.

The Kremlin said tensions over Ukraine were growing and that it was still waiting for a written US response to its comprehensive demands for security guarantees from the West.

Pessimistic statements highlighted the gap between Washington and Moscow as Blinken prepares for a meeting with Russian Foreign Minister Sergei Lavrov on Friday, whom a Russian foreign policy analyst called “perhaps the last stop before the train wreck”.

Blinken promised “uninterrupted diplomatic efforts to prevent new aggression and to promote dialogue and peace.” He said a Russian gathering of tens of thousands of troops near Ukraine’s borders was taking place “without provocation, without reason”.

He did not explain how fast Russia could move. Independent security analysts say they do not believe Moscow has so far assembled the logistical and medical units it would need to launch an immediate attack.

Russia has also relocated troops to Belarus over what it calls joint military exercises, giving it the opportunity to attack neighboring Ukraine to the north, east and south.

She continues to deny any such intent. Kremlin spokesman Dmitry Peskov said Western arms shipments to Ukraine, military maneuvers and NATO airstrikes were to blame for rising tensions around Ukraine.

Russian Deputy Foreign Minister Sergei Ryabkov said he did not believe there was a risk of a full-scale war. He reiterated that Moscow had no plans to attack, strike or invade Ukraine.

His comments sparked a rally in Russian and Ukrainian government bonds hit in recent weeks by escalating tensions.

Ukrainian Foreign Minister Dmytro Kuleba accused Russia of trying to sow panic in Ukraine. He said diplomacy offered the only way out and was an “unbreakable principle” that no decision on Ukraine could be made without its involvement.

“The basic principle is simple: a strong Ukraine is the best instrument to restrain Russia,” he said.

The United States says Russia may be ready for a new invasion of Ukraine, eight years after it invaded Crimea and backed separatist forces that took control of large parts of eastern Ukraine.

Russia says it feels threatened by Kiev’s growing ties with the West. It wants to prevent Ukraine from joining NATO and for the alliance to withdraw troops and weapons from Eastern Europe.

“It’s not clear what Russia’s central demand is. They have put a number of things on the table,” Blinken said.

“Some of them are clearly absolute non-beginners, like closing NATO’s door to new members,” he said, adding that Washington remains willing to discuss anything that boosts “everyone’s security on a reciprocal basis.” “.

This could include weapons control, risk reduction and the scale and extent of military training, he said.

Blinken said he would not provide a written response to Lavrov on Russia’s proposals in Geneva on Friday, something Moscow has repeatedly demanded.

Both sides need to evaluate a series of talks on the crisis last week, he said. After Friday, Blinken added, diplomatic opportunities could become clearer.

But Vladimir Frolov, a former Russian diplomat who is now a foreign policy analyst, said Moscow would not be appeased by the US-NATO offer of arms control talks and was seeking a much broader reshuffle. of the European security order.

“The Lavrov-Blinken meeting is probably the last stop before the train sank. But hopes are dim, positions are incompatible,” Frolov said.

Describing Russia’s military deployment in Belarus as a “major escalation”, Frolov gave a horrific assessment of the crisis.

“I think stopping a US surrender and their Ukrainian surrender to Russia, some kind of military option is inevitable now.”

Britain says it has begun supplying Ukraine with anti-tank weapons.

Blinken said more aid was planned in the coming weeks and would increase further in the event of Russian aggression.

Ryabkov called on the West to stop supplying weapons to Ukraine, the Interfax news agency reported.

Blinken will hold talks in Berlin on Thursday with the German Foreign Minister and the Quad group, which also includes Britain and France.

French President Emmanuel Macron said the European Union – which has so far not been involved in negotiations with Russia – should draft proposals in the coming weeks for a new security agreement that it would then conclude with Moscow.

Emerging talents in the spotlight during hybrid Paris Fashion Week