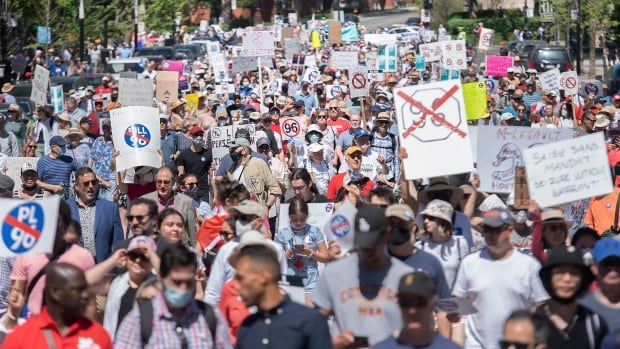 The streets of downtown Montreal were flooded with protesters on Saturday as many gathered against Bill 96, the bill proposed by the Quebec government to reform the French Language Charter.

Organized by groups representing the province’s English-speaking community, the protest sought to send a strong message to the majority government that legislation such as this is unacceptable.

“We tell the Prime Minister[Franois] Legault and his government CAQ[that] we are Quebec, ”said Marlene Jennings, president of the Quebec Community Groups Network.

“We value and support French, we want to see it protected and promoted, but not on our backs, not on our fundamental rights.”

Introduced a year ago, Bill 96 is in the final stages of approval and is expected to be voted in the National Assembly later this month. He will make some changes to the 1977 French Language Charter, also known as Bill 101, by strengthening the status of French in “all spheres of society”.

Despite the great heat, the protesters left Dawson College at 10:30 p.m. and marched just under two miles to the Montreal offices of Quebec Prime Minister Franois Legaultat on the corner of Sherbrooke and McGill College Avenue.

Signs that read “Is there room for me in Quebec?” and “Defend French, but not at the expense of English rights” were seen in the crowd.

While many protesters agreed that French be protected in the province, they said the law would restrict access to education, health care and justice for those whose first language is not French.

‘An additional burden on our people,’ says the indigenous activist

Among the proposed changes to the statute include the requirement for newcomers to Quebec to receive government services exclusively in French after six months in the province, which many have called an unrealistic time limit for learning a new language.

An amendment to the bill was also recently adopted, which would require students in English CEGEPs to take three additional courses in French without exception for indigenous students.

“We are fighting to keep our language alive. So bill 96 puts an additional burden on our people,” he said.

“Our priority is for our people to learn Mohawk.”

To ensure that French is the “official and common language of Quebec”, the government will also impose new obligations regarding the use of French in companies with 25 to 49 employees, will limit the use of English in courts and in public utilities, will grant search and seizure powers without an order from the Quebec language regulator and limited enrollment in CEGEP English to prevent more students from transferring from French-language schools to English.

Quebec Liberal Party leader Dominique Anglade joined the protest on Saturday, saying there are better ways to strengthen the French language than creating divisions among Quebec.

“But we have to do it in a comprehensive way, for all Quebecers, and that’s not what Bill 96 is doing right now.”

The Minister responsible for the French language in Quebec, Simon Jolin-Barrete, has strongly defended Bill 96 against criticism, as has Legault, who called it reasonable, balanced and necessary “to ensure proper language protection. French “.

The government has previously used the unspoken clause, which will limit the possibility of a legal objection against the law.

Despite assurances from Legault that English speakers’ rights would be protected, Dawson College student KianaLalavie was concerned about how additional English courses at GEGEP could affect international students and newcomers to Quebec.

“They do not have English rights,” she said. “Their R score will decrease, their life opportunities will be limited and they will not be able to access their chosen programs.”