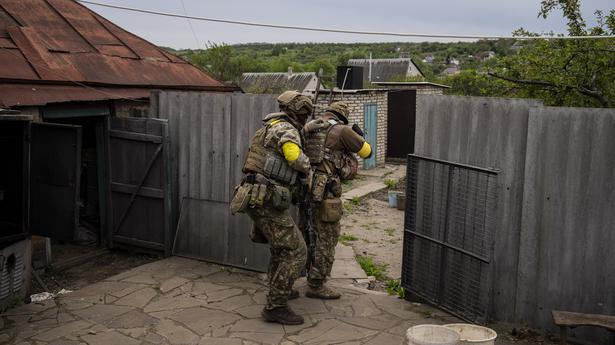 Russian troops are withdrawing from Ukraine’s second largest city after bombing it for weeks, the Ukrainian military said on Saturday, as forces from Kiev and Moscow engaged in a fierce battle for the eastern industrial heart of the country.

The Ukrainian General Staff said the Russians were withdrawing from the northeastern city of Kharkiv and focusing on guarding supply routes as they launched mortar, artillery and air strikes in the eastern province of Donetsk in order to impoverish Ukrainian and destroyed the fortifications.

President Volodymyr Zelensky said the Ukrainians were doing their utmost to expel the invaders and that the outcome of the war would depend on the support of Europe and other allies.

No one today can predict how long this war will last, Mr Zelensky said in his video speech late Friday night.

After Russian forces failed to capture Kiev after the February 24 invasion, President Vladimir Putin shifted his focus eastward to the Donbas, an industrial region where Ukrainian troops have been fighting Moscow-backed separatists since 2014.

The Russian offensive aims to encircle Ukraine’s most experienced and well-equipped troops, which are stationed in the east, and capture parts of the Donbas that remain under Ukrainian control.

Getting a full picture of the direction the fighting is taking in the east has been difficult, as airstrikes and artillery shelling have made the movement around extremely dangerous for journalists. But the battle seems to be a back-and-forth stalemate with no major advances on either side.

Russia has occupied several villages and towns in the Donbas, including Rubizhne, a city of about 55,000 pre-war inhabitants.

Kharkiv, which is not far from the Russian border and only 80 km southwest of the Russian city of Belgorod, has suffered several weeks of intense shelling. The predominantly Russian-speaking city with a population of 1.4 million pre-war was a major Russian military target at the start of the war, when Moscow hoped to occupy and retain major Ukrainian cities.

The head of Kiev’s military intelligence told the UK’s Sky News on Saturday that the war in Ukraine could reach its breaking point by August and end in defeat for Russia before the end of the year.

Major General Kyrylo Budanov, 36, said he was optimistic about the current trajectory of the conflict.

The breaking point will be in the second half of August, he said.

Most active combat actions will be completed by the end of this year. As a result, we will renew Ukrainian power in all our lost territories, including Donbas and Crimea, he said.

Fighting was fierce on the Siversky Donets River near the town of Severodonetsk, where Ukraine has launched counterattacks but failed to stop Russia’s advance, said Oleh Zhdanov, a Ukrainian military analyst.

The fate of a large part of the Ukrainian army is being decided to be about 40,000 Ukrainian soldiers, he said.

However, Russian forces suffered heavy losses in a Ukrainian attack that destroyed a pontoon bridge they were using in an attempt to cross the same river, the largest in eastern Ukraine in the city of Bilohorivka, Ukrainian and British officials said.