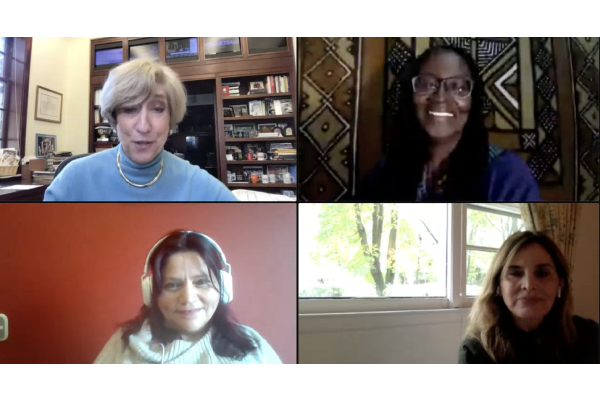 In a talk that explored the pressures and issues that female journalists continue to face around the world, UNC Hussman School of Journalism and Media Dean Susan King spoke with three Courage in Journalism Prize winners during a virtual speech delivered by International Women’s Media Foundation (IWMF) on October 27, 2020.

King co-founded IWMF 30 years ago, an organization that provides professional opportunities, security training and support for women journalists around the world.

A life of bravery: Then and now talk presented the former winners of the Courage Award in Journalism Catherine Gicheru, Klaudia duque and Janine di Giovanni.

The award recognizes journalists who report on controversial topics, work in hostile environments to women, and share difficult truths. To date, the IWMF has recognized more than 100 journalists in 56 countries with the award.

The women discussed how the award changed their careers, what has changed for women journalists in the last 30 years, and what the future holds, including in the United States, where King said in recent years American journalists have been labeled as enemies of people and harassment on a scale comparable to that of journalists being persecuted in other countries.

Keep doing what you do, Duque said. Do not be afraid when they attack us, because they are afraid of our power.

Duque knows closely about the oppression of journalists. A Colombian journalist and human rights defender, she has spent a career shedding light on corruption in her home country, facing persecution and cruelty, including kidnapping, illegal surveillance and forced exile three times.

Di Giovanni, who has reported on more than 15 humanitarian conflicts and disasters around the world, compared the current situation in America to the dangerous conditions she has seen in other parts of the world, noting a similar division in the pillars. of democracy human rights, the rule of law and freedom of expression that it has demonstrated in internationally volatile regions.

But most dangerous to me is the lack of trust in the press, she said.

Women’s voices are an important part of any healthy press, all panelists agreed, whether in reporting conflicts or building peace. Also, female journalists were often given the opportunity to report on sensitive topics such as sexual violence that were not male journalists.

However, women journalists around the world still face gender-specific threats in the performance of their jobs, from sexual harassment to lack of representation in leadership positions.

This reinforces the need to keep talking up and moving forward, which receiving the Courage in Journalism Award encouraged each of the panelists to do.

[The award] kept me going and inspired me to do my best so another woman could get that backbone to stay in business, said Gicheru, a Kenyan journalist who currently serves as the editor-in-chief of Gazeta Star in Kenya.

King asked the panelists how they take care of their health in a profession that constantly deals with trauma. How do you protect yourself by bearing witness? Asked the king.

Gicheru said an excellent support system, both professionally and personally, established it. For Duque, the daughter continued it, and for di Giovanni it was the craft of journalism itself that gave her comfort, able to write and share about the events she saw.

To help women journalists cope with trauma at work, the IWMF provides programs such as hostile environmental training, cyberbullying studies, and emergency funding for needs such as trauma, mental health services, and legal support, among others.

The IWMF’s support, not only in its programs, but in the vibrant community of female journalists it creates, also strengthens and supports panelists in their work, at a time when the work has never been more critical, they said.

King reflected on the conversation after it ended: What struck me was how much journalists have in common, regardless of where they are, she said, while noting the importance of a strong press around the world. If the public understands what is happening in the country, those places will be stronger. Democracy cannot happen without a free press.

A life of bravery was part of the IWMFs Press Freedom Speakers Series, a series of virtual conversations that bring together thought leaders and experts to take on some of the most pressing issues in journalism and democracy in general.

The evolution of cable television news after Donald Trump

The man dies after crashing into a tree in North Canterbury