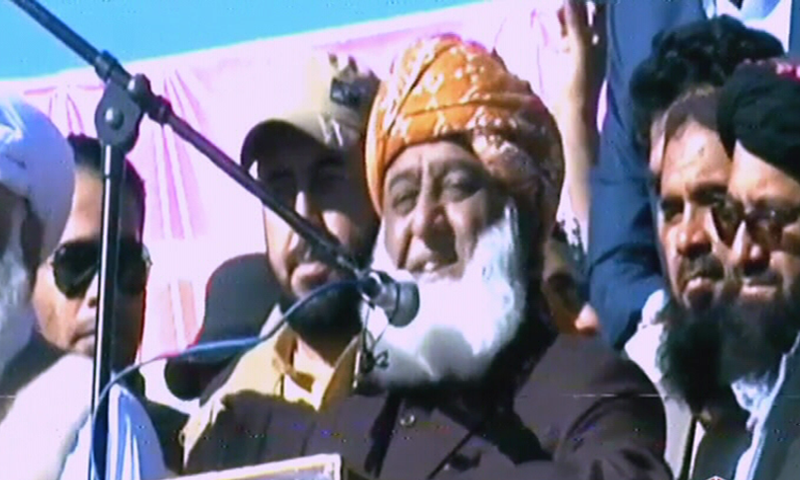 QUETTA: Leaders of the Democratic Movement of Pakistan (PDM) said on Wednesday that their fight was not against the army but against the government which was imposed on the country after stealing the public mandate through election manipulation.

Speaking at a public meeting in Loralai, they said a government which was elected against the will of the people had no right to stay in power and a government would soon be formed according to the wishes of the people as a result of the democratic war started by the alliance of the opposition with 10 parties across the country.

The resignations that will be delivered in due time, Fazl tells Loralai rally

Maulana Fazl said: Our war is not against the army. We have started a struggle to uphold the supremacy of the Constitution and for a parliament which is elected by the people in a free, fair and impartial election.

He said the PDM wanted to make it clear to the institution that it would continue to fight those who considered the Constitution a piece of paper in every forum, including parliament.

The PDM chairman said: We will definitely submit our resignations in due time. Lawmakers from all PDM member parties have submitted their resignations to their leadership.

He said that when he was in opposition, Imran Khan had told the nation that if there was inflation in the country, the prime minister would be responsible for it. Today people are so fed up with inflation that they are committing suicide while throwing their children in rivers, but the prime minister does not care.

Maulana Fazl said if Pakistan Tehreek-i-Insaf continues to rule it, Pakistan will face a terrible tsunami that would destroy the country economically and politically.

Mehmood Achakzai said the PDM had started a movement for the restoration of democracy and the emergence of a Pakistan in which the rights of all nationalities would be secure and parliament would enjoy supremacy.

We are not praying to anyone. We just want our rights to be recognized and all nationalities living in the country should have rights over their natural resources, said Mr Achakzai.