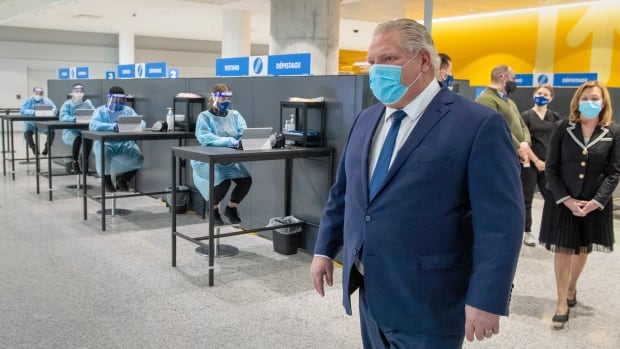 Ontario Prime Minister Doug Ford has decided to announce the mandatory COVID-19 test for all international travelers arriving at Toronto Pearson International Airport, according to a government source.

Ford is expected to detail the plan at a press conference in Queen’s Park starting at 3 p.m. ET.You will be able to see it directly in this story.

The source said the province will move forward with the testing program despite an announcement by Prime Minister Justin Trudeau this morning that the federal government intends to implement its requirement for mandatory tests in the coming weeks.

Trudeau said the mandatory tests will be part of a number of new measures aimed at limiting the transmission of the virus and its variants in relation to travel to Canada.

The provincial government source said Ontario is moving forward anyway because federal measures may not be all in place by mid-February.

The news comes as Ontario deals with an increasing number of COVID-19 cases caused by virus variants. Revised forecasts released by public health officials Thursday suggest that by March, variant B117 first identified in the UK may be the dominant species in Ontario.

As of yesterday, there had been 51 confirmed cases of B117 in the province.

“We have to test every person who comes to Pearson and every other crossing. It is absolutely critical. We have to put up barriers in every way we can,” Ford told reporters Monday.

“I can not stress enough: close our borders and make sure everyone who enters is tested.”

Despite Ford’s focus on international travel, provincial data cited by the government show it accounted for only 1.8 percent of all COVID-19 traceable cases in Ontario. This figure drops to about 1 percent for all traceable cases from September 1, 2020, during the second wave of the disease.

International travel is the only category of potential source of transmission that has not grown exponentially during the pandemic.

The province also plans to expand the availability of rapid COVID-19 tests in priority settings, such as long-term care and high-risk retirement homes, essential workplaces and schools, the source said.

CBC News reported earlier this week that Ontario had decided without a quarter of the 4.6 million rapid tests distributed by Canada’s Public Health Agency in the province.

The Ministry of Health said at the time more than 159,000 rapid PCR tests had gone to rural and remote communities, including the First Nations, the ministry said, and about 850,000 rapid antigen tests had been distributed to long-term care homes and countries. work.

The Ministry of Health also said it has distributed rapid tests to more than 150 jobs including Air Canada, Magna and Ontario Power Generation.

Meanwhile, Ontarioreported another 1,837 cases of COVID-19 on Friday and the deaths of 58 other people with the disease.

Other public health units that saw double-digit growth were:

(Note: All figures used in this story can be found in the panel of the Ministry of Health COVID-19 or in itDaily Epidemiological Summary. The number of cases for each region may differ from that reported by the local public health unit because local units report figures at different times.)

The seven-day average of new cases fell to 2,011, the lowest since December 16, marking 19 consecutive days of reductions.

There are currently 20,357 active infections confirmed across the province, from a peak of 30,632 on Jan. 11. This figure has been declining as resolved cases consistently outpace new cases.

Ontario labs processed 69,040 test samples for the virus and reported a test positivity rate of 3.3 percent for the second consecutive day.

According to the Ministry of Health, the total number of people with COVID-19 who were in hospitals dropped significantly, from 47, to 1,291. Patients being treated in intensive care increased slightly, to two 360, but the number requiring a ventilator dropped from five to 271.

The additional deaths pushed the official Ontario number associated with COVID-19 to 6,072. Thirty-two of the deaths reported today were long-term care residents.

There are ongoing COVID-19 outbreaks in 229 of Ontario’s 626 long-term care facilities, according to the ministry.

Moreover, the province said 10,215 doses of vaccine were administered yesterday. A total of 327,455 single doses have been given so far, while 61,679 people have been fully immunized with two shots.