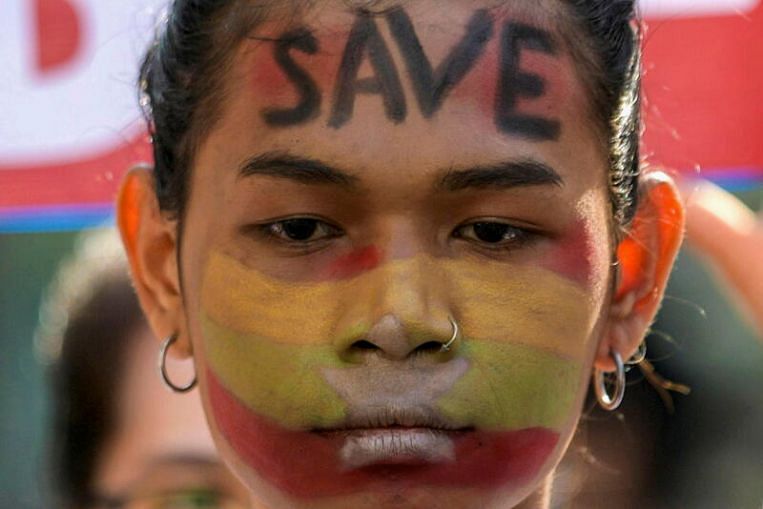 Among the three ongoing mass protests in this region, the largest and most powerful is the agitation of farmers in India, which has already passed ten weeks.

These farmers are seeking the repeal of new government laws on farms, which aim to promote free market policies.

In Thailand, anti-government protests that began a year ago resumed after a long hiatus due to the global pandemic.

And the latest protest to attract global attention is in Myanmar where its powerful army, which took power on February 1, faces a major popular resistance, the kind of which has not been seen in many decades.

These protests have some distinctive elements. As internet users are using hashtags and memes in cyberspace, on the streets we have witnessed Tractor March, three-finger greetings, pots and pans colliding and the use of symbolic colors, and so on.

In India, a harsh winter and strong government tactics, including cutting off essential water and electricity supplies, have failed to weaken farmers’ resolve.

The protest marks the biggest political challenge facing Indian Prime Minister Narendra Modi. It follows another major crackdown in Delhi about a year ago against the Citizenship Change Act (CAA) which allegedly targets minority Muslims.

The fall of Shaheen Bagh, part of a wider movement against the law, lasted for 101 days, perhaps the longest period in modern India. It ended only after the implementation of a nationwide blockade to address the spread of the Covid-19 pandemic in India.

The ongoing farmers’ protest bears many similarities to that protest.

Agitated farmers fear that new agricultural laws will threaten decades-old concessions – such as secured prices – and weaken their bargaining power, leaving them vulnerable to exploitation by private enterprises.

Both of these protests began shortly after Prime Minister Modi took a second term in office.

The massive electoral success of the BJP in the 2019 general elections surprised many analysts because of the prospect of majority growth in the world’s largest democracy. Both protests have seen the emergence of a new non-political activism.

Although most opposition parties remained silent about the Shaheen Bagh demonstration, they are now weighed down with vocal support for farmers. Even some of the BJP coalition partners in different states have sided with the farmers.

Agitating farmers have also attracted support from political leaders, academics and celebrities from around the world.

In fact, those interventions have drawn strong reactions from the Indian Ministry of Foreign Affairs.

Both material and moral support have increased for farmers, despite all efforts to cut off their supplies and isolate them.

The government’s promise of an 18-month break in law enforcement and the Supreme Court intervening to form a mediation committee have so far failed to persuade farmers to give up.

How this emptiness will end remains an open question. But the protest has already set some interesting precedents for activists around the world.

For one, it remains largely peaceful, except for a brief slide in the Republic Day Tractor March in the heart of Delhi, after which protest organizers quickly disengaged from the rioters and condemned the violence.

Patience to all kinds of incitement, including online and offline abuse, and successful resistance to infiltration attempts by potential troublemakers, and the politicization of their cause has already given them a moral victory.

Attempts to label them as communists or separatists Khalistan have also failed.

In neighboring Myanmar, the pro-democracy movement has a wider appeal and participation. Spontaneity in challenging martial law was something new in Myanmar, coming against the backdrop of the military’s historic dominance in state affairs.

People have used numerous tactics to express their disapproval of military rule. Residents put red shirts on their balconies and windows, hitting pots and pans has become an evening ritual, and street demonstrations have taken on a wide range of formations.

Even a couple in their wedding dresses took to the streets holding placards declaring a rejection of dictatorial rule.

Young girls in colorful outfits marched like an exhibition on the catwalks. The youngest protesters were seen holding posters saying, “You f ** ked with a wrong generation.”

These are still the first days after the annulment of the general elections and the establishment of a martial law.

But it seems the pro-democracy movement is taking shape to be a broader campaign of civil disobedience.

Another important development in the ongoing protest is the support it has received from various ethnic and religious minority groups, including the victims of the genocide, the Rohingya.

Rohingya youth living in camps in Bangladesh and elsewhere in the world have taken to social media to express solidarity with the movement. Regrets of ethnic discrimination and oppression of ethnic Rohingya were also heard from some vocalists.

Pro-democracy activists abroad have already called on the international community that the restoration of the NLD in power must include a determined commitment and plan for the recognition of Rohingya’s citizenship and repatriation.

Stories coming from different parts of the country show that the protesters stand firm in their determination. The great international pressure on the military ruler may have given them some encouragement.

But memories of the brutal strikes of 1988 and 2007 make observers nervous. Protesters are using the three-finger salute that began in Thailand and it has become a symbol of resistance and solidarity for the continued movement of democracy.

The gesture first appeared in Thailand just days after a military coup in May 2014.

Even in Thailand, pro-democracy activists have not lost the steam of protest. On February 13, protesters briefly clashed with police after throwing the Democracy Monument in Bangkok with a red cloth symbolizing the blood shed for the cause of democracy.

They were demanding changes to the law that prevents criticism of the monarch. The protests began in early 2020 after the dissolution of the Future Forward Party by former military ruler and Prime Minister Prayut Chan-o-cha.

Their other demands include a new democratic constitution and the dissolution of parliament which is dominated by pro-military politicians.

Although the Covid-19 pandemic caused some temporary disruption in their movement, activists are now back on the road.

Popular protests, whether for democracy or the special interests of a large part of the population, always provoke political debates which sometimes do not remain confined within a single territory.

Therefore, these protests need closer attention. There is much to learn from these, especially creative ways of communicating and steam-holding tactics for a protracted fight.

The writer is a London-based freelance journalist. The newspaper is a member of media partner The Straits Times, Asia News Network, an alliance of 23 news media organizations.