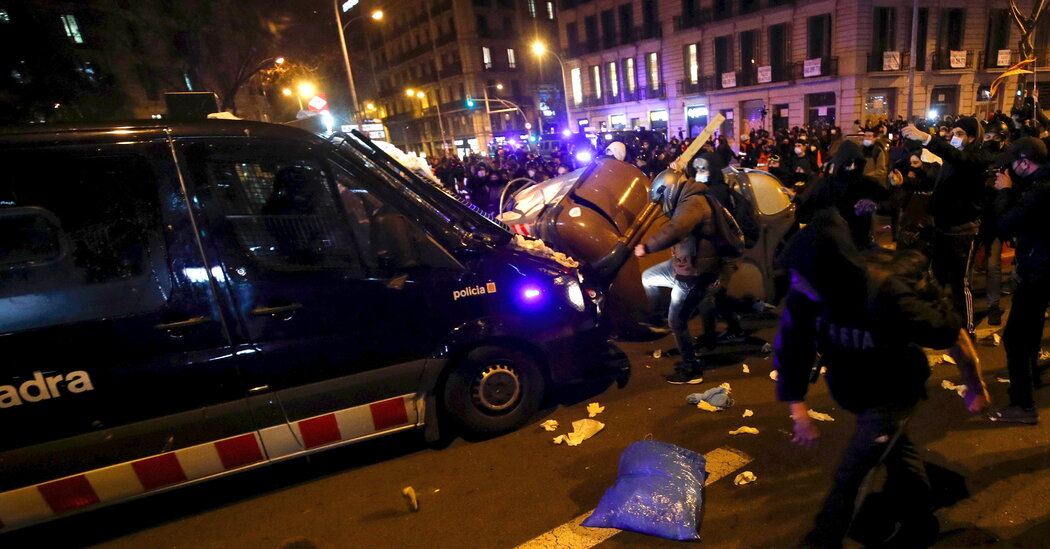 Protesters in Madrid and Barcelona clashed with police Wednesday over the arrest of Pablo Hasl, a popular rapper who had barricaded himself at a university to avoid a prison sentence for violating Spanish laws restricting speech.

Mr Hasl was arrested on Tuesday in Lleida, a town west of Barcelona, ​​after he failed to begin serving a nine-month prison sentence. He was convicted two years ago on charges of glorifying terrorism and insulting the monarchy.

The issue has galvanized widespread public support in Spain for Mr. Hasl and made the left-wing coalition government say it plans to revise parts of the criminal code.

Protests over the arrest of Mr. Hasls began on Tuesday in Barcelona and other cities in Catalonia in northeastern Spain, where supporters of a regional independence movement have often clashed with police. Thousands took to the streets to demand his release.

Demonstrations continued on Wednesday and spread to Madrid, the Spanish capital and other cities. Protesters were seen throwing objects at police, breaking windows and setting fire to rubbish bins, the Associated Press reported.

Journalists at the scene posted images and videos on social media showing large crowds of supporters, many of them wearing surgical masks, chanting for the rapper and protesting against groups of riot police officers.

Pablo, friend, you are not alone, a crowd sang Wednesday in Lleida, the Catalan city where Mr. Hasl.

Authorities in Madrid said on Wednesday that entry to a central train station was restricted as a result of public order disruption.

Early news reports indicated that dozens of protesters had been arrested or injured during clashes with police. A Reuters reporter in Barcelona was among the injured when officers fired rubber bullets at a crowd, the news agency reported.

Mr Hasl, whose real name is Pablo Rivadulla Dur, was a well-known device before being sentenced to prison in 2018.

He has accused Spanish police of brutality, comparing judges to Nazis, and voiced support for ETA, a Basque separatist group that disbanded two years ago after waging one of Europe’s longest-running terrorist campaigns.

In 2018, the Spanish Supreme Court sentenced Mr. Hasl to just over two years in prison for glorifying terrorism and insulting the monarchy. The charges centered on his inflammatory tweets and a song he had written about King Juan Carlos, who abdicated in 2014. A judge later reduced the sentence to nine months.

Last month, Mr. Hasl was ordered to appear in jail by mid-February. More than 200 artists later signed a petition demanding his release.

Public pressure prompted the Justice Ministry to say yes on Monday planned to change the country criminal code to reduce penalties in relation to the types of speech offenses for which Mr. Hasl was convicted. The ministry did not provide specifics about its plan.

On Tuesday, Mr. Hasl was arrested after he and his supporters barricaded themselves inside a building at Lleida University.

They will never silence us! he yelled at reporters as police took him to a patrol car, the newspaper El Pas reported. Death to the fascist state!

In his last Twitter message before he was imprisoned, Mr. Hasle issued a warning his supporters.

Tomorrow could be you, he wrote.

His supporters include several Spanish politicians, director Pedro Almodvar and film star Javier Bardem. Amnesty International called his arrest an excessive and disproportionate restriction on his freedom of expression.

No one should face prosecution just for expressing themselves on social media or singing something that might be unpleasant or shocking, said Esteban Beltrn, director of Amnesty International Spain, in a statement hours before Mr’s arrest. Hasls. Expressions that do not clearly and directly incite violence cannot be criminalized.

But the rappers’ legal problems may continue for some time.

Mr Hasls’s nine-month term could be extended to more than two years because he has refused to pay the fines associated with his sentence, El Pas reported. Police are also investigating him for allegedly trying to break into a government building in Lleida during a protest two years ago over the detention in Germany of Carles Puigdemont, the former leader of Catalonia.

Google reorganizes AI team triggered by the departure of researchers