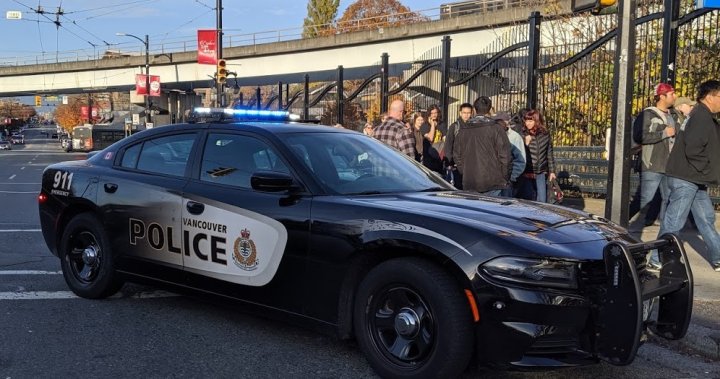 Critics are renewing their call for Vancouver police to halt street checks, amid a new report showing the controversial practice has dropped dramatically over the past year.

Under a new road control policy implemented in January 2020, the Vancouver Police Department is required to produce an annual audit of its use of the practice.

The VPD has updated its ‘karting’ policy. Here’s what it means to you

Ai report, filed Thursday at the Vancouver Police Board, found that road controls had fallen by more than 94 percent between 2020 and 2021, “probably due to a combination of public dialogue on road controls and restrictions imposed on the practice by (new policy)”.

Street checks, sometimes referred to as “karting”, are defined by the VPD as any “voluntary interaction between a police officer and a person that is more than a casual conversation and impedes the movement of the person”.

Department policy prohibits the use of roadside checks for random or identity-based reasons (such as race or ethnicity), and requires a “legitimate public safety purpose” such as suspicious activity, crime prevention or collection of intelligence.

READ MORE:1 in 5 women carded by Vancouver police in 2016 were indigenous: complaints

Police claim that roadside checks are effective in preventing crime and a useful tool in missing persons cases and interactions with the homeless.

“We can not ignore something when we see it, so if the police see someone lying in the winter, in the snow and they are freezing to death we will not just go by car and call someone else to attend,” Said Vancouver Police Chief Adam Palmer.

1:42Allegations of racist and inappropriate behavior by VPD officers appear in review

Allegations of racist and inappropriate behavior by VPD officers appear in review June 25, 2020

According to the audit, 261 registers of road checks were submitted, only 75 of which police say were “proactive road checks”.

The rest were police using existing police powers to detain people for incidents such as traffic jams, ticket investigation investigations and calls for service, according to the audit. This data was being reclassified and officers were receiving more classification training, she said.

Of the 75 others, seven did not have an “articulated public safety reason” for the ban, as required by politics. The department is following up with officers at those stops, according to the audit.

Black people, who make up either one percent of Vancouver’s population, accounted for 2.3 percent of “proactive” roadside checks.

Caucasians, who make up 46.1 percent of the city’s population, accounted for 56.3 percent of controls.

1:54VPD is accused of ‘profiling’ when conducting road checks

The audit found that more than half of the checks involving indigenous people were wellness checks, adding that with indigenous people making up one-third of the city’s homeless population “it would be unrealistic to expect police contacts at a general level to to remain untouched. “

Harsha Walia, executive director of the BC Civil Liberties Association, said the fact that police have cut street checks by more than 90 per cent shows they are not really needed.

“They keep saying that road checks are voluntary, which means people are free to go – and that is basically an admission that they do not have the ability to stop someone,” she said.

“It’s not enough or okay to arrange a road check, and then say, ‘We will do road checks, but they are voluntary, the person is free to leave.’ Because we know, given power imbalance between the public and the police in general, and even more so when you have marginalized communities… people will not feel that they can leave.

Don Tom, vice president of the BC Indian Union of Chiefs, echoed these concerns.

“What does it look like when someone, when a police officer comes and does a road check?” he asked.

“There is a person with a gun and a uniform asking you questions and I think if you are the person on the other side of getting these questions, it does not feel like volunteering.”

In 2018, UBCIC and BCCLA launched a grievance with the Office of the BC Police Complaints Commissioner, following the release of 10 years of VPD data showing 15 percent of its street checks involved indigenous people and four percent involved blacks.

The organizations, along with 90 other groups, are calling on the department to stop the practice.

Vancouver Mayor Kennedy Stewart has also led an initiative in city council to see the abolition of the use of street controls.

The police board has invited critical road control groups to meet and further discuss their concerns.

With files by Nadia Stewart