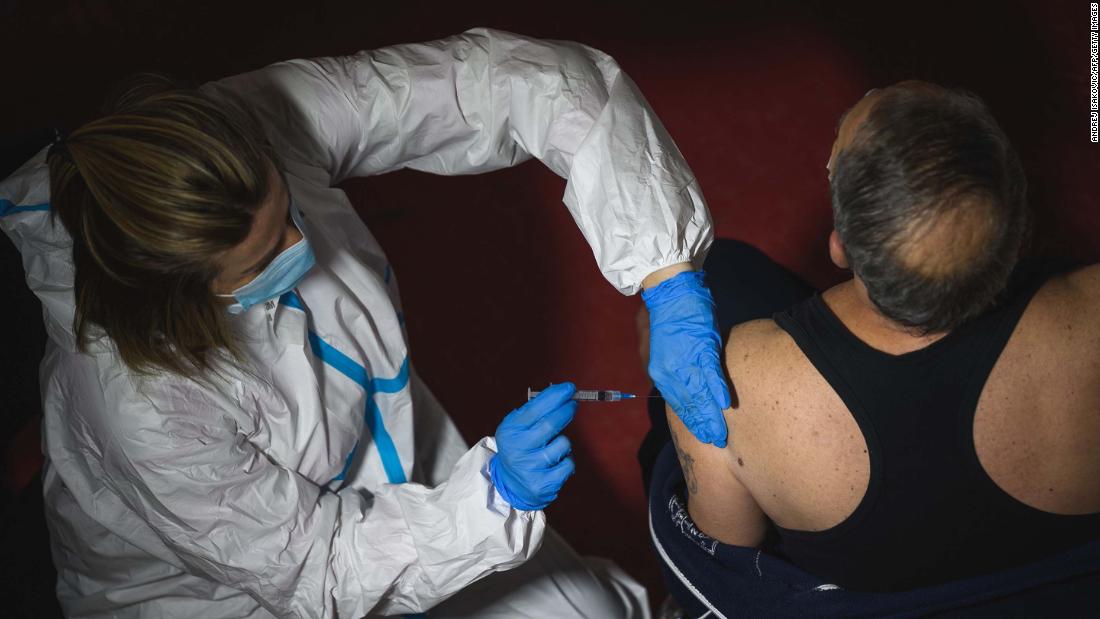 Kosovo, Montenegro and Bosnia and Herzegovina are still waiting to receive their first deliveries of vaccines, while the spread in Albania and Northern Macedonia has so far been limited to a few hundred people.

The countries of the Western Balkans are the main allies and potential future members of the European Union, but they have been left out of the bloc’s vaccine supply plans.

The EU has secured more than 2.3 billion doses of various coronavirus vaccines and said it expects to share some of them with others. He set aside € 70m ($ 85m) for the Western Balkans region to buy some of these doses in the future, but as its spread has been slow and delayed, those countries are still pending.

And as relatively rich countries – at least in the global context – they are also not a top priority for programs designed to help the world’s poorest countries access vaccines.

They have joined the COVAX program, which aims to make vaccine access more accessible worldwide, but the limited supply of the scheme means its main focus is on the 92 low- and middle-income countries that can not afford vaccines without funding and the Balkan countries are not among them. As members of COVAX self-financing, they will receive 850,000 doses of a combination of coronavirus vaccines – but when these can arrive is unclear.
“The continuing tragedy of the Western Balkans is that they are on the edge,” said Allison Carragher, a visiting scholar at Carnegie Europe, a global policy research institution. “They are all aspiring members of the EU, so they looked at the EU program first, but this has been avoided and delayed by supply chain issues.”

Many see the EU withdrawal of the Western Balkan countries as a missed opportunity. “This is a small region in terms of population, which means that with a small investment in vaccines, the EU would have gained a lot in terms of soft power and influence in the region,” said Alba Cela, director executive i Albanian Institute of International Studies. The fact that the EU did not do that is “allowing other actors to play a role”, she added.

Engjellushe Morina, senior policy associate at the European Council on Foreign Relations, said this feeling of being behind could have serious consequences for the region’s security.

Faced with the prospect of a long wait, Serbia, the largest of the six Western Balkan countries, took matters into its own hands and sought vaccines elsewhere. China and Russia were ready to intervene.

The Serbian government said China has so far supplied it with 1.5 million doses of Sinopharm vaccine, catapulting the country of 7 million to the forefront of the global vaccination race. About 850,000 people have been vaccinated against Covid-19 in Serbia since Monday, according to the government.

Most got the Chinese vaccine, though the government said it also received 90,000 doses of the Russian Sputnik V vaccine and 40,950 of the Pfizer / BioNtech vaccine. The price that Serbia paid for the vaccines has not been announced.

Adnan Cerimagic, a senior analyst at ESI, a political and research institute, said that without the Chinese vaccine, Serbia would be in a similar position to the rest of the region. “All the success of the vaccination program is based on China and I think it has worked for China as well, using Serbia as a place where they can have an impact in Europe … media reports say that thanks to the Chinese vaccine, Serbia is done better than Germany and many other countries, “he said.

Carragher said the deal has been a win-win situation. “There is definitely a clear benefit for Serbia, not only with a reputation, being the top vaccinator on the European continent, but also a legitimacy of the government, which has been democratically backward,” she said. “But here, you know, whenever you are first in Europe, it looks like you are doing something good.”

China also has a lot to gain. “President Xi has said that his goal is to make this region the first region in the world that is fully covered by the Strip and Roads initiative and from that point of view, alliances like this can be used for other diplomatic priorities,” Carragher said. The Belts and Roads Initiative is the signing of China’s global infrastructure policy that seeks to create new trade corridors connecting China with Asia, Africa and Europe.

“It’s also about the basic principle behind the vaccine program, this is what they are also selling, legitimizing the lack of transparency and vaccines. [being] widely placed before declaring itself truly safe, “Carragher added, pointing to the fact that Russia began its vaccination program before finalizing clinical trials, while China has not published their data in a peer-reviewed publication.

China ka hit back following criticism of its lack of transparency about vaccines, launching attacks on shootings produced by companies and other countries. Russia was criticized for the early delivery of its then-unproven vaccine. But earlier this month, the results evaluated by Sputnik V Phase 3 trial colleagues showed that there are very high levels of efficiency providing something like an excuse for the country.

Vaccines are not even China’s first venture in the Western Balkans – in the past decade, it has invested heavily in Serbia, Montenegro, Croatia, Bosnia and Herzegovina and Macedonia, financing major infrastructure and resource projects, including highways. in Bosnia and Herzegovina and mines and factories in Serbia. It has also opened Confucius Institutes and university sinology departments throughout the region.

Serbia’s proliferation has been such a success that it has allowed the government to engage in its round of regional vaccine diplomacy.

Last week, it donated 4,688 of its Pfizer / BioNTech doses to Northern Macedonia, which is still waiting for any of the more than 100,000 doses it provided through COVAX. The donation was touted as a major sign of co-operation, with Serbian President Aleksandar Vucic and Northern Macedonian Prime Minister Zoran Zaev attending a handover ceremony at the border.

On Wednesday, Serbia announced it would donate 4,000 doses of the Russian vaccine to Montenegro, which is also still awaiting further deliveries.

Donations are a symbolic gesture. But in this historically unstable region, sensitive, symbols like this issue.

When the Serbian government announced that it would do so provide vaccines for Serbs living in Kosovo, the Kosovo government accused him of playing politics with vaccines and “smuggling of certified pharmaceutical products” in place. Kosovo declared independence from Serbia in 2008 and most Western countries, including the United States, recognize it as an independent state. Serbia, however, does not recognize Kosovo’s independence.

Kosovo has ordered over 100,000 doses of vaccine from COVAX and is awaiting deliveries from the EU as part of a € 70 million scheme.

The Serbian government also said it donated some of its doses of Russian vaccine Sputnik V Republika Srpska – one of the two highly autonomous entities that make up Bosnia and Herzegovina. Vaccination of the first 1,000 healthcare workers began there last week, according to the Republika Srpska Ministry of Health website. The region has also ordered 400,000 doses of the Russian vaccine. The government of the country’s Bosniak-Croat entity, the Federation of Bosnia and Herzegovina, said it ordered 800,000 doses through the EU scheme.

Separately, the Presidency of Bosnia and Herzegovina, the governing body of the entire country, has ordered 1.2 million doses through the COVAX program.

Albania has secured 500,000 doses of the Pfizer vaccine through a direct contract with the company, although according to the government, less than 10,000 have been delivered so far – not enough to vaccinate the country’s 23,000 healthcare workers. At the head of its agreement with Pfizer, Albania has also ordered about 1.1 million doses through COVAX, ensuring that there will be sufficient doses for its entire population.

‘EU could have done more’

While the EU has promised to help the region purchase Covid-19 vaccines, there is still no indication of how this will work.

But from a strategic and security point of view, the region is essential for the EU. It is geographically completely surrounded by EU member states, but remains vulnerable. Albania, Montenegro, Northern Macedonia and Serbia are all officially EU candidate countries, while Bosnia and Herzegovina and Kosovo are seen as possible candidates in the future.

Cela said that this proximity to the EU is the reason why this is not just about solidarity with the poorest neighbors. “There is a lack of strategic vision. If this region is going to integrate – and it is already de facto integrated into the EU, because we have free movement and we have a lot of people traveling back and forth, in practical terms – it does not make sense that The EU should not provide the region with vaccines, “she said, stressing that having low vaccination levels in neighboring countries would pose a risk to the EU.

“It’s a very hot topic here right now,” Cela said, stressing that the overwhelming feeling in the region is that the European Union could have done more for the Western Balkans.